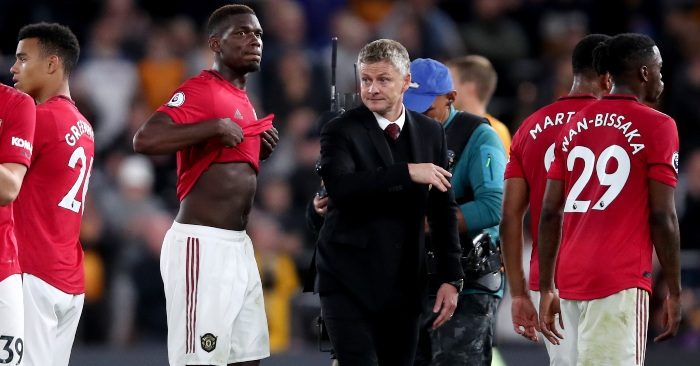 A habit can be broken in three weeks, apparently. But so deep-rooted have been Manchester United’s flaws in recent years that we should not be surprised, nor too harsh, when the Red Devils lapse back into their old ways.

There were certainly signs at Wolves that United are trying to change, especially in the opening 45 minutes. As Solskjaer admitted before kick-off, Molineux has not been a happy hunting ground for the United boss having lost on all three of his previous visits, with the last two in spring providing the catalyst for the wheels to come off during a miserable run-in. But rather than haunt United, that seemed to inspire them in the first period.

It was perhaps the most dominant 45 minutes United have enjoyed on the road since before the start of last season. Against a Wolves side with a taste for blood, the Red Devils neutered their hosts, with a one-goal lead scant reward for their superiority, even if Rui Patricio was hardly bombarded in the home net.

Solskjaer was bold in his selection, opting for Daniel James on the right rather than Andreas Pereira, perhaps to offer more pace on the counter-attack. But it was an all-out assault in the first half, with United dominating possession, moving it around quickly and noticeably more comfortably when building from the back.

Their goal was a consequence of the most incisive play of the entire game. Luke Shaw, Jesse Lingard and Marcus Rashford all combined on the left to slip in Anthony Martial, who smashed in his 50th United goal with real aplomb. It has taken Martial four years to hit that landmark – the France star has to be aiming to ascend to the century in half that time to justify the barely-deserved faith Solskjaer has placed in him to lead the United line.

There was still the odd turnover and the occasional sloppiness which littered the win over Chelsea, though a 4-0 victory offered Solskjaer a perfect cover story last Sunday. Eight days later, Wolves – eventually – were able to shine a brighter light on United’s flaws.

For all the quality United showed in the first period, there remained the nagging feeling that it was because of Wolves’ lack of resistance rather than in spite of their customary resilience against the big boys. Solskjaer must have warned his players at the break that they would not have it quite so easy from there on in, and Wolves did not have to go too far through the gears to catch up with the visitors.

When Wolves offered some fight, United had to take their turn on the ropes. Half-time heavyweight substitute Adama Traore forced the Red Devils back and his unsophisticated-but-exhilarating attack set in motion the sequence that led to Wolves’ leveller. United escaped initially thanks to the inside of the post, but respite was brief and the following set-piece proved to be United’s undoing.

Having just allowed Joao Moutinho the opportunity to plant a free-kick onto Raul Jimenez’s forehead, United contrived to allow Ruben Neves enough time to take two touches on the edge of the box and the space to bend an unstoppable curling shot into David De Gea’s top corner. Yes, that Ruben Neves, the one who has scored more goals from outside the box than he’s had touches inside it. It was a well-worked routine which teed-up Neves but during all the analysis United are sure to have done this last week, did no one think it might be wise to pay some attention to the Premier League’s most deadly long-range assassin, rather than grant him the freedom to take his aim in his own sweet time?

If none of the analysts spotted the danger, you might expect the players to take some responsibility. But this is a group with a core which demonstrated a disdainful view on that principle last season. And when the chance came to quickly regain their lead, the personality flaws which have held United back in recent years took over once more.

Your verdict on the penalty palaver will probably depend on which extreme view you hold on Paul Pogba – after all, the middle ground is a barren wasteland when it comes to United’s want-away midfielder. But even his most staunch supporters will know, though probably never admit, that the whole episode was unnecessarily weird.

4 – Paul Pogba has missed four penalties in the Premier League since the start of last season; the most of any player in the competition. Fluffed. pic.twitter.com/NI1odCCBg5

Why did Pogba take this crucial kick? Rashford scored one last week, in addition to pressure penalties in the Nations League semi-final for England and the all-important strike to sink PSG in Paris. By every conceivable metric and theory, Rashford should have been the one placing the ball on the spot.

But United seem to have a laissez-faire approach to penalties which mirrors their overall approach to vast swathes of last season. ‘If you’ve won it, you have a go’ appears to be their view. Perhaps we should be thankful that Pogba and Rashford didn’t play ‘Paper, Scissors, Stone’.

You may counter with the viewpoint that if Pogba is confident, then why should he not take it? But confidence has never been Pogba’s problem. Over-confidence bordering on misplaced arrogance is certainly more of a concern. Having now missed a fourth since the start of last season, someone should be telling Pogba to back off the next spot-kick, because you can guarantee he will step forward again. That is not always the admirable quality it is often made out to be.

It should have been Rashford telling Pogba to step away. As we know, the England striker has a better track record from the spot and this season, when the biggest question being asked of him is ‘can he score more goals?’, Rashford should have grabbed the ball and have someone pry it from his cold, dead hands if they want to take it from him. But the fact he offered it up so willingly offers a worrying insight into his priorities as well as how in thrall to Pogba many United players remain.

The Red Devils created some other chances – Jesse Lingard wasted the best – while Harry Maguire and Victor Lindelof looked largely unflappable in open play, all of which shows that United have made tangible strides since last season. They are certainly a work in progress, but seeing their old flaws spoil some encouraging early work made for more Molineux frustration for Solskjaer.