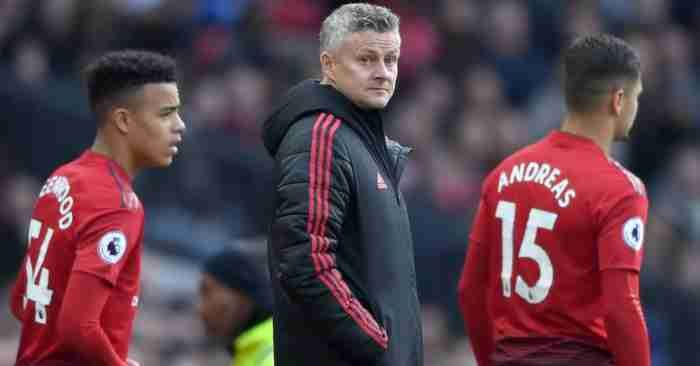 On paper, everything went swimmingly for Ole Gunnar Solskjaer. The Manchester United manager made five changes, some forced upon him between meetings with Barcelona, but his side were still able to see off West Ham and remain in the running for the top four. But Solskjaer will have seen nothing to allay the concerns he already held over his spluttering side.

United were extremely lucky to take all three points from a game which showcased some appalling sloppiness from both sides. Solskjaer may take some consolation from digging out a victory despite playing poorly, but despite what he said on Friday, this latest disappointment was part of a pattern of stodgy performances in recent weeks.

“We had some good performances, but we haven’t had the quality in front of goal,” claimed Solskjaer and he was half-right. United have been wasteful in attack but that trait has not been limited just to the final third. The Red Devils haven’t turned in a good performance since Solskjaer was confirmed as permanent manager, or since the triumph over PSG on March 6.

Positives today? Fred’s form continued to encourage; Chris Smalling and Phil Jones kept the rearguard intact for the most part; and David De Gea made one wonderful save to arrest a slump which continued for long enough to be culpable for Felipe Anderson’s equaliser. But no United player stood out to challenge Paul Pogba’s token man of the match award simply for stroking home both penalties.

Such set-pieces looked United’s likeliest route to victory because they created few clear openings, and those they did, they wasted. With Marcus Rashford rested, it was a huge opportunity for Solskjaer’s front three to impress. But Anthony Martial, Romelu Lukaku and Jesse Lingard all laboured, forcing the manager to turn to his bench and employ Rashford when he would really rather have not.

Mata unfortunate to be hooked ahead of Martial and Lingard. #mufc

The debate over where United’s priorities lie in the transfer market this summer continues to rage and divide, and though the defence was Jose Mourinho’s biggest concern – one which remains valid – Solskjaer seems to have greater worries over his midfield and attack. His engine room will require some bolstering if only because of expected departures, but further forward, United’s multitude of options do not appear to contain within them the required quality to take United back to where they feel they belong.

In the case of today’s front three, the impetus and forward momentum garnered from Mourinho’s exit appears long gone. Injuries have played a part, but since the party in Paris, Lukaku, Martial and Lingard between them have scored or created just a single goal in six subsequent matches.

Against the Hammers, they combined for only one shot that failed to find the target. When Lukaku was replaced by Mason Greenwood, neither Martial nor Lingard would have been able to build a convincing case had it been their number up. All three looked tired and leggy, while Rashford sprang from the bench and looked instantly more threatening when he was the only player who could justifiably claim to be fatigued.

Martial earned the penalty which ultimately won United the points, but even after running clear, the Frenchman seemed hesitant. Just as he appeared on the few occasions he got faced up against 34-year-old Pablo Zabaleta. But it was on the other side where United toiled most.

Jadon Sancho: Has become only the fourth player in Europe's top five leagues to register double figures for both goals and assists after a first half brace against Mainz – following in the footsteps of Lionel Messi, Eden Hazard and Pablo Sarabia.https://t.co/LtiAhTReGi pic.twitter.com/SXCSAUDIrW

Juan Mata began on the right, while Lukaku was shifted to the flank when Rashford was sent through the middle just 10 minutes into the second half. Greenwood had little opportunity to show his seniors how it should be done, but it won’t escape Solskjaer that Jadon Sancho was tearing through defences with Dortmund again while United continued to stutter down that side.

Solskjaer may also have been keeping a close eye on Declan Rice on his Old Trafford audition and the 20-year-old, a rumoured £50million target, provided West Ham with some of the bite United so clearly lack. But United will have to invest even more heavily in addressing their lack of cutting edge to Rashford’s right.