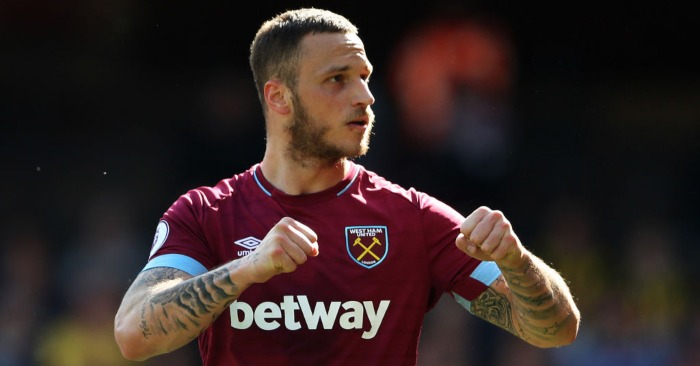 “He’s not a cow or a horse which you bring to market. He’s a highly talented footballer who is simply being used by West Ham. He’s just a number to them. To them he is just a commodity.”

The brother and agent of Marko Arnautovic is right on one point: He is neither a cow nor a horse, though his performances after being denied a January move to China brought other animals to mind – a sloth or a donkey would not look so fetching in claret but would have been equally effective. Also, a cow or a horse is not paid £120,000 a week, and therein lies the difference between the Austrian and an animal. He is a commodity but a very, very well-paid commodity who signed a contract just a few months ago; his champions may use the language of human trafficking but it should elicit no such sympathy. You cannot choose golden shackles embedded with diamonds and then complain they are too tight.

According to reports, West Ham inserted a clause in Arnautovic’s new contract stipulating that he could be sold for £40m any summer before mid-June, giving the club ample time to find a replacement. It was inserted at the player’s request, presumably because he assumed – even at 30 – that somebody would pay such a fee. So talking about cows, horses and markets when a bid of less than £20m is turned down in early July is ludicrous. Exactly like Crystal Palace with Wilfried Zaha, the price is to be decided by the (non) selling club, and not by the player or his brother.

But unlike Palace and the irreplaceable Zaha, West Ham’s future would probably look brighter without the loose cannon of Arnautovic, a highly talented footballer but one who comes with the baggage of immaturity. For a figure more than £20m but realistically less than £40m – assuming a replacement can be found – they absolutely should sell a player who is an emblem of an old, flamboyant, fragile club at a time when the future looks younger, brighter and eminently more sensible.

The 30-year-old Arnautovic sticks out like a sore thumb among the Hammers’ other marketable assets – Declan Rice, Issa Diop and new signing Pablo Fornals are all 23 or under, while Felipe Anderson has recently hit his peak at 26. He has twice delivered double-figure seasons to ease them away from relegation trouble, but it’s fanciful to think that he can improve again at 30 to help West Ham to the next level, which should really be a push for European qualification. There are younger, better strikers available to a sizeable club in London.

A parting of the ways should suit both parties, but that does not mean West Ham should bow to the demands of their horse and grant him Chinese pasture out of the goodness of their hearts. If they believe he is worth more than £20m – crucially, to them and not to another club – then they are within their rights to hold him to the terms of the contract he willingly signed less than six months ago. “I want to say to the fans that I’m happy to stay,” he said, signing himself over to West Ham for over four years in exchange for £120,000 a week.

Signing that very lucrative contract made him a commodity; he should not be surprised or disappointed when he is treated as such.