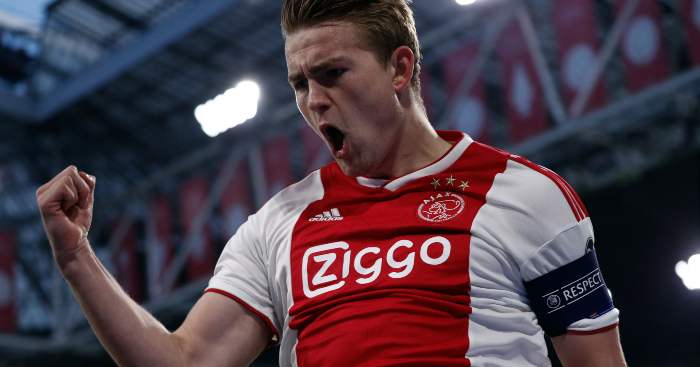 Much to Paul Pogba and Antoine Griezmann‘s chagrin, one would suspect, Matthijs De Ligt is the hottest property on the transfer market right now. The Ajax captain will leave his hometown and country in the coming weeks for one very lucky club.

There is no such thing as a dead cert in the transfer market but De Ligt is probably the closest it comes. The Netherlands star’s experience and leadership qualities defy his youth and, unlike many of peers, he seems to relish defending among the muck and bullets as much as he does striding forward once the ball is won. Already, the 19-year-old can do the lot.

So the clamour among clubs for his signature and the thrill of the chase for their fans is entirely to be expected. Perhaps even milked. Especially since the whole saga has been reignited having seemingly reached a swift and serene conclusion months ago, when Barcelona were all but a signature away from presenting him as theirs.

Then Ajax’s stunning run to the Champions League semi-finals saw De Ligt ascend even higher in the esteem of Europe’s big-hitters, giving Mino Raiola his very own semi. Whatever terms may have been agreed, however loosely, would need to be renegotiated with the super agent.

That has allowed Manchester United, Manchester City, Liverpool, Bayern Munich and Juventus all to have a sniff of the centre-half. Barca’s will to complete the deal remains as strong as ever but the prospect of closing it is restricted by their reluctance – or inability – to match the terms being thrown around by their European rivals.

Especially now PSG are on the scene. Reports suggest their former sporting director Leonardo is hoping to use De Ligt and his familiarity with the Dutchman’s representatives to get his old job back. Apparently, his plan is coming together rather nicely. PSG are now understood to be the favourites to land Europe’s biggest catch.

Splendid work by Leonardo; a wonderful bonus for Thomas Tuchel; another eye-watering pay-day for Raiola. Great news all round. Except for De Ligt.

PSG has to be considered the shortest straw when he comes to take his pick in the coming days. Raiola may list a multitude of reasons – 12.4 million a year, to be exact – why Paris should be his next destination but De Ligt must resist falling for his agent’s pitch and look at the bigger picture beyond his bank balance.

Of course, remuneration is important. Barca are said to have offered De Ligt around £153,000 a week, in line with what they have agreed to pay Frenkie De Jong, but Raiola is now looking for around £240,000 a week. If one employer is willing to pay 50 per cent more than another, who wouldn’t be tempted? De Ligt would be daft not to at least ponder their proposal.

What a season for Matthijs de Ligt! 👏👏👏

But when he does, many would hope the teenager considers what he would have to sacrifice for the salary. De Ligt has said little specifically about his next move other than his desire for a regular place and a ‘challenge’. PSG would pass the first test but not the second.

Every major European league has its dominant force, most of whom want De Ligt, but no competition is as heavily weighted as Ligue Un is for PSG. They are currently 1/7 to retain the title they defended by 16 points despite playing most of the last two months of the season in flip-flops.

The only challenge for PSG lies in the Champions League, which makes up roughly 20 per cent of their season. For the remaining 45-plus matches, a defender of De Ligt’s quality would cruise. And, inevitably, stagnate.

His error against England, which he duly made up for, offered De Ligt a timely reminder of his priorities. “For me, the most important thing is to play,” he said about his big decision. “I think today showed what experience can do.” Ligue Un will not provide the environment for the teenager to round off those few remaining edges, less so even than the Eredivisie.

As well as the financial sacrifice, De Ligt is also said to be concerned about not being a starter at Barca. Those fears, should they exist, seem unfounded. The best teams need at least three quality centre-backs and though Clement Lenglet has settled in alongside Gerard Pique, Barca would not spend a world-record amount on a defender to make him sit and watch from the sidelines. The competition should drive De Ligt on and all the insights into his character we have been offered suggest he is not one to back down.

That, and the fact United could match PSG’s financial package, must be the only reason Ole Gunnar Solskjaer’s side remain in the running. De Ligt has refused to rule out the Red Devils – rather, the defender has been something of a tease – and though United are themselves wary of being used by yet another target to eek out more money in other negotiations, they retain hope of making De Ligt the face of their revival and the master craftsman tasked with restoring their crumbling defence.

Despite the state of shambles engulfing Old Trafford, United would still provide an environment more conducive to the youngster’s development. As would Manchester City or Liverpool. One might hope that Raiola is telling his client a similar thing – if they should be so naive.

It is the agent’s primary function and basest instinct to source the most lucrative option; De Ligt is looking for the most ‘logical’ choice. To swerve stagnation at PSG and the prospect of facing the same questions in two years when Raiola inevitably looks to move his prized cash cow into another field, De Ligt must refuse to be led in decisions over his own future.