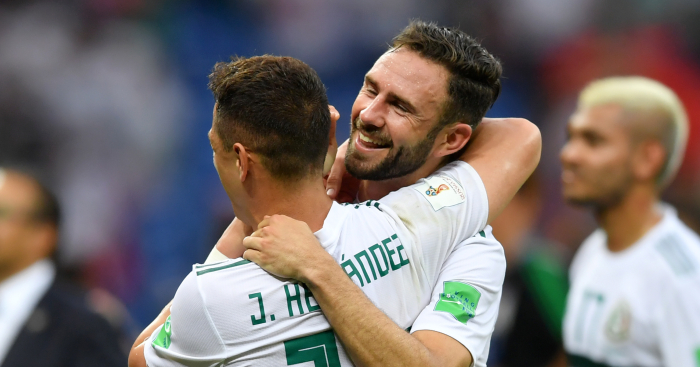 If you thought Gareth Southgate’s predecessors endured a difficult relationship with their country’s media, spare a thought for Juan Carlos Osorio. Mexico’s coach has faced constant criticism for his tendency to tinker with personnel and formation, producing a team that often looks confused, and so too laboured. A 7-0 loss to Chile in 2016 was a cause of national calamity, and somehow not his sacking.

At least that time the spotlight shone on the green grass of the pitch. In 2011, the Gold Cup team had five players sent home after doping test failure, with drug controversies also in 1999 and 2005. An Under-21 squad faced accusations of players using prostitutes in a team hotel and causing complaints from management. In 2010, 12 senior players were fined for a similar incident.

Nothing changes. Before leaving for Russia, it was accused that eight Mexican players cavorted (we’ll opt for euphemisms here) with 30 escorts after beating Scotland in a friendly. And then there’s captain Rafael Marquez, currently on a US blacklist on charges of laundering money for drug cartels. Controversy is nothing new for Mexico. Controversy is the norm.

The most striking aspect of the victory over Germany, then, was just how efficient and assured El Tri were. They invited Germany onto them and pushed opposition attacking players out wide. When the ball was turned over, they attacked at speed down the wings and exposed full-backs caught high up the pitch and Sami Khedira on his own in front of the defence. Hirving Lozano was the beneficiary, but this was a victory earned through the courage of conviction in every player. No histrionics, no controversies. Out-Germanying Germany, if we wish to resort to national stereotypes.

“We had designed a plan,” said the coach after the game. “But the idea always was to have two fast players on the sides. Osorio the tinkerman became Osorio the tactician; sometimes the difference lies only in the end result.

But if the Germany result afforded Mexico the chance to seize control of Group F, this country has had its fingers burned far too many times for rampant positivity to reign. The build-up brought with it nerves that Osorio would make changes again, or the team would collapse under the expectation it had created a few days earlier. No national team does pride before a fall quite like them.

That pride remains firmly intact. Osorio resisted the temptation the make changes, and Mexico rubber-stamped that first victory. They overcame tactical fouling and a defensive, unspectacular South Korean team with discipline and patience. Heung-Min Son’s wonderful late goal was just reward for his own personal mission to carry this team, but there is a reason why South Korea finished below Iran in qualifying.

If Lozano is Mexico’s future, Carlos Vela and Javier Hernandez are the past and present. These two footballing Peter Pans are still somehow just 29 and 30 having drifted around English and Spanish football, settling at disparate locations either side of the Atlantic. They shared 171 international caps and 67 goals before Saturday. Make that 173 and 69 now.

We knew that this Mexico team could be exciting and enthralling; so is every team as likely to shoot themselves in the foot as they are to cartwheel forward. The question at home and abroad was whether they could follow up flamboyant and fancy with functional. The answer was just as emphatic.

A polarising manager with a polarising squad has apparently created the most efficient team in this tournament. Mexico are maximising their strengths and effectively covering their weaknesses. For the first time in their history, a quarter-final away from home soil is in reach. Perennial strangers to harmony could quickly get used to this domestic bliss.