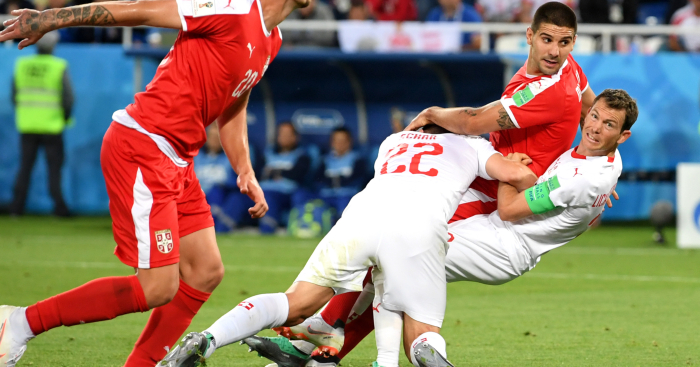 Few knew what to expect from Serbia on the World Cup stage and the same could be said for Aleksandar Mitrovic, their leading front man. Two games in, one victory and this heartbreaking defeat to Switzerland, we can assume it was Fulham’s centre-forward who arrived in Russia, rather than the Newcastle outcast.

Playing as Serbia’s pivot, Mitrovic has carried out his duties admirably. The 23-year-old has been charged by Mladen Krstaic with leading the line and carrying their main goalscoring threat, while also stretching defences to give the much-hyped Sergej Milinkovic-Savic room to strut his stuff. So far, he has repaid the faith Rafael Benitez obviously lacks.

Although Switzerland eventually overcame Serbia, they struggled to get to grips with Mitrovic, who opened the scoring and looked a constant threat, especially though the first hour

It’s little surprise that Mitrovic looks buoyant. He went into the World Cup on the back of, in his words, “the best three or four months in my professional life”. Since moving to Fulham on deadline day in January, courtesy of a transfer that was arranged by Snapchat rather than fax machine, the centre-forward scored 12 goals in 17 Championship appearances that fired the Cottagers remarkable unbeaten run which eventually led to promotion.

It is a far cry from January. Mitrovic travelled to Craven Cottage in no doubt over where he stood in Benitez’s plans. Newcastle were crying out for a striker – any striker – and Benitez considered the permanently injured Daniel Sturridge and the equally unpredictable Islam Slimani a better bet than Mitrovic.

The perception of the former Anderlecht striker’s tempestuous nature did not help his cause. Mitrovic, then 21, received a couple of daft red cards during his first year at St James’ Park, but since the second of those dismissals on the last day of the 2015/16 season, the centre-forward has only been booked six times in two years. The striker was booked in Kaliningrad but anyone could understand his frustration at being denied a penalty in the second half after two Switzerland defenders tried to wrestle him away from a cross. Despite the obvious grappling, Mitrovic still got to the ball first.

Ill-discipline wasn’t Benitez’s biggest gripe with Mitrovic. Before cutting him adrift in January, the Toon boss offered an explanation over his attacking preferences.

“I am sure they will all, Dwight [Gayle], Mitro or Joselu, score goals – especially if we made 30 crosses per game. But we don’t have that type of team. When we aren’t in the final third and the striker isn’t the quickest we then have to defend well and be strong to regain the ball.

“We can play counter-attack but can’t expect certain things from certain players. If we don’t have the pace in the team we can’t be in there. When we talk about Mitro or Joselu they are different to Dwight.

“Dwight has pace and the others are big and win balls in the air. It makes a big difference.”

Mitrovic might not be as mobile as Gayle, who scored six goals last term, and one moment midway through the second half illustrated that when he was caught a step behind Aleksandar Kolarov’s low ball across the face of the Swiss goal. But if there is pace around him, which Newcastle eventually recruited in Kenedy while cutting Mitrovic adrift, then the centre-forward’s other assets can allow others to flourish. Importantly too, though he may not be the quickest, his willingness to run cannot be questioned, especially when he feels that graft is appreciated.

Rio is impressed by Mitrovic so far… #SRBSWI #worldcup pic.twitter.com/bqApdF495m

Fulham boss Slavisa Jokanovic prefers to focus on what Mitrovic can do: “He can hold the ball, he made important things and at the end what is important is we start our striker and he scores the goals.”

His tally for Fulham and 16 in 32 starts for Serbia certainly backs up that viewpoint. But that evidence is unlikely to sway Benitez and the debate over Mitrovic’s quality continues.

There is contrasting evidence from Fulham skipper Tom Cairney and Malcolm McDonald, who knows a thing or two about scoring goals for Newcastle.

“We’ve got to try and sign him,” said the hugely-impressive Cairney. “He is a Premier League centre-forward.”

McDonald begged to differ, claiming that by dropping to the Championship, Mitovic had “found his level” in England.  “That is his level in this country.”

Newcastle are said to want around £20million for Mitrovic though his performances in Russia will surely tempt Mike Ashley to push his luck. But given the cost of goalscorers and the difficulty Newcastle have previously had sourcing good value – or rather, ‘cheap’ – strikers, then perhaps Benitez might consider taking another look at the improving international already on his books.

Xherdan Shaqiri’s late winner for Switzerland in Kaliningrad offers the Toon boss the opportunity to do just that next Wednesday. The deflated Serbians must engineer a victory against a Brazil side invigorated by their late win over Costa Rica. It is a daunting task but one that provides Mitrovic the chance to show Benitez – or any other suitor – that he can play as the lead man in team deprived of the ball.