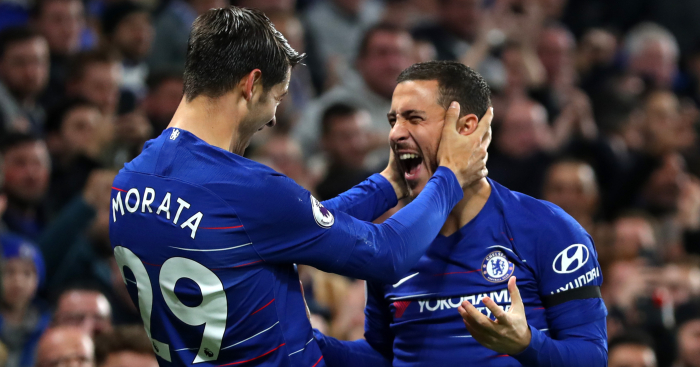 “It is easy to stimulate Hazard – as long as you let him have fun,” said Maurizio Sarri last month, but the Chelsea manager could just as easily have been talking about Alvaro Morata, Pedro, Willian or any other Blues player relishing the opportunity to cast aside endless work on ‘shape’ and keeping discipline out of possession, and instead delight in one-touch football and movement as Chelsea keep the ball for fun. And it really is fun.

“The players really enjoy this kind of game,” said Alvaro Morata this week. The Spaniard admits he “struggled” under Antonio Conte, whose rigid tactics would often leave him isolated, exposed and defined by his deficiencies. “For most of the game, we have the ball in the other team’s half of the pitch and that’s good for us.”

It’s particularly good for Morata, who has now scored four goals in his last four Premier League games. It turns out that the one thing better than a non-scoring striker is a scoring striker; Olivier Giroud will have a battle to wrest a striking berth from the Spaniard, whose grin has made a welcome return in recent weeks. He has now scored as many top-flight goals this season as Mo Salah and Anthony Martial. Not bad for the supposedly weak link in this Chelsea side.

“The philosophy is that if we have the ball most of the time, the other team doesn’t have it, which is very important because they won’t be able to make a lot of chances.” It sounds simple because it absolutely is; Chelsea were far from their best against Palace – whose pace up front caused Chelsea all manner of problems – and yet they eventually eased to victory, helped by the rather useful trump card of Eden Hazard.

But for all the talk of Chelsea being over-reliant on the Belgian, the Blues are comfortably the second top scorers in the Premier League behind Manchester City, with Hazard scoring just 26% of their goals. By that measure, Arsenal, Liverpool and Tottenham are all more reliant on one attacking player. Only the case against Tottenham stands up to real scrutiny.

This is absolutely not a one-man Chelsea team but a collective, taking joy in stretching and pulling apart the opposition through relentless possession. For the first quarter of the game against Palace they got it wrong and the service to Morata was non-existent; lofted crosses were gobbled up by the grateful James Tomkins and Mamadou Sakho. The isolated Spaniard touched the ball just three times in the first 23 minutes, but when given proper service, he scored with his very first chance. From there, he visibly grew. There was no surprise when he added a second.

The wonderful by-product of the joy Chelsea are obviously taking in dominating the ball is the hunger they then display to win it back. To have 74% possession and still out-tackle the opposition is testament to that hunger. Against Palace, Morata made more tackles (3) than in the entirety of his other Premier League appearances this season. It really is easy to stimulate footballers when you let them have some fun.

Will this Chelsea side win the Premier League title? It seems unlikely given the extraordinary form of Manchester City. But what can certainly be achieved is that Chelsea can join Liverpool, Arsenal and Tottenham in uniting fans and players in a mission to be entertaining and to be entertained while still mounting a serious challenge. That might sound frivolous but there are a limited number of trophies; joy, on the other hand, can be unconfined.