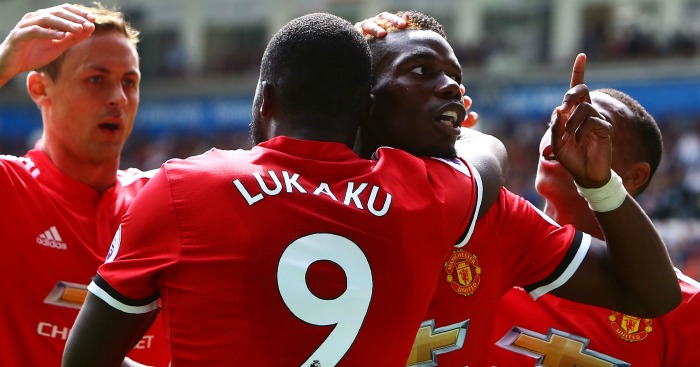 Jose Mourinho wanted to see “happy football” from Manchester United at Swansea and with another four-goal victory, his team certainly brightened their manager’s mood once again. We may only be two games into the season but the Portuguese is having to work very hard to keep the smirk off his face.

His contentment is understandable. Having worked with this group for a year now, Mourinho has assembled a squad that he trusts. “I’m so happy to be the manager of these guys,” he said before last weekend. “I told them a few days ago that during my long career I never had a group that I liked so much, like I like them.”

That is because this squad, and any number of teams that he can pick from it, now possesses all the attributes Mourinho’s winning teams have been made up of. The showed again today imagination and pace in attack combined with a defensive resolve that appears even stronger than last season, when only Tottenham conceded fewer goals. But not even Mauricio Pochettino’s side have kept as many clean sheets – today’s was their 14th of 2017. There is an ominous-looking balance about United that makes very hard to resist.

At the back, Mourinho’s side have continued where they left off, which is hardly surprising given their only defensive recruit this summer was Victor Lindelof, but the Sweden centre-half has yet to see any Premier League action. Given how such an approach worked with Henrikh Mkhitaryan, Lindelof should be willing to be patient, but he will have seen his supremely-drilled rivals for the position – Eric Bailly and Phil Jones – play the opening two games with their slippers on. Their comfort is thanks in no small part to the protection offered to them by Nemanja Matic.

What a difference the Serbian makes, even to an already-hard-to-beat outfit. For years, even during the final days of the Sir Alex Ferguson regime, United have been searching for a midfielder to play as the more defensively-minded half of a pair; someone who can break up play when United haven’t got the ball, but crucially then dictate it when they have. After spluffing millions on the likes of Morgan Schneiderlin, Mourinho has got him and he knows he’s pulled a fast one on Chelsea, regardless of whoever it was at Stamford Bridge – Antonio Conte or the board – that decided sending Matic to Old Trafford was a wise move.

It is Matic who is allowing United to play with “freedom, without fear to move” as Mourinho hoped for before Swansea were so ruthlessly dispatched. Ander Herrera made a huge impression last season in a similar role and as Daniel Storey says, though his nose may be put out of joint somewhat by Matic’s arrival, the snidey Basque still has a crucial role to play. But Matic’s intelligence and understanding of when to press and when to drop off is giving United another defensive dimension. Since his arrival, they are winning the ball higher up the pitch or are at least able to play up there quicker if they start from deeper. And that’s when the fun really starts.

With the security of Matic behind them, United’s front four can worry less about “tactical discipline”, as Mourinho suggested. Make that five when Pogba bursts forward, and though Swansea managed to stop the visiting full-backs from having an attacking influence today – the only part of their tactical change that paid off – United’s attack still looked rapid and relentless.

Eight goals in two games tells its own story, albeit against mediocre opposition. But, of course, United failed to pass similar examinations last season, or at least not with such flying colours. Romelu Lukaku is off to a flying start, with three goals in two games and stretching defences in a way Zlatan Ibrahimovic couldn’t last term. Marcus Rashford looks as threatening as anyone in the league, and though his finishing has underwhelmed at times, anyone who has concerns about his contribution is worrying about nothing. And, as we saw today, if it isn’t happening for the England attacker, Anthony Martial – another who is benefiting from some of Mourinho’s tough love – is champing at the bit to get involved in a way we never saw last term.

When Lukaku, Rashford and Martial stretch defences, Juan Mata and Mkhitaryan are exploiting the resulting space. Mkhitaryan has provided the assists for half of United’s eight goals, driving forward and breaking lines, and though Mata was restricted to a wider role today, he is justifying Mourinho’s faith in opting for his guile over Jesse Lingard’s pace on the right.

“Consistency, confidence and discipline.” Those were the three attributes that Mourinho picked out when assessing United’s start and though it has taken a year – longer than the manager preferred – the Red Devils finally appear to have in spades all three of the qualities he values the most. They lacked the first characteristic last season; the second was sporadic and while the third was prominent during his first year, Mourinho knows titles are not won with discipline alone. It has, though, given United a foundation upon which to play their “happy football” and everyone around Old Trafford looks to be enjoying themselves for the first time since the Ferguson era.