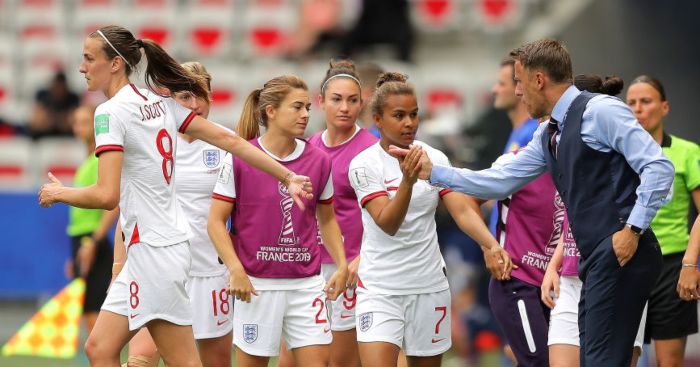 It was not so much the request for more “arrogance” from his players, nor the claim that this was “the most difficult first game out of any team in the competition”. Rather, Phil Neville’s appeal to his England squad that “they have to take this train forward” was his most instructive World Cup message.

It felt like an apt analogy. The manager has, at times, felt like a passenger on this journey. England had won all three of their qualifying games for this tournament without conceding a single goal prior to Neville’s January 2018 appointment: 6-0, 4-0 and 5-0. They reached the semi-finals of both the 2015 World Cup and 2017 Euros. They boasted some of the world’s best players and most successful clubs. They were, and still are, ranked the third-best team in the world.

The infrastructure was there, the foundations settled. Neville was certainly not walking into an easy job – Mark Sampson’s departure made sure of that – but he could follow the instructions rather than having to write them himself.

Perhaps any driver could have taken the train this far. Save for self-sabotage or a complete implosion, England seemed destined to arrive in France this summer with designs on the trophy. The true test of Neville’s credentials would not come before the tournament, but at it.

A hard-fought 2-1 victory over Scotland does not answer every question – no scoreline or result could have, really. Neville would only have been definitively judged on this game in the event of a defeat. But a win restores momentum that was lost in that disappointing loss to New Zealand.

This was a necessary response, albeit one that should have been more comfortable. As fortuitous as the VAR-assisted opener was, Nikita Parris’ penalty was just reward for her irrepressible display. Ellen White’s clinical finish doubled England’s lead, and only some sublime goalkeeping from Lee Alexander kept Scotland in the game.

It was a foothold that Shelley Kerr’s side almost capitalised upon to devastating effect – and poor game-management only helped them. England had looked considerably less assured after Millie Bright was forced off through injury early in the second half. Only Lucy Bronze – wonderful here – and the injured Toni Duggan have played more minutes under Neville than Abbie McManus but her introduction coincided with Scotland’s strongest period. The culprit for the eventual consolation was Steph Houghton, whose sloppy pass led to Claire Emslie’s goal. But it was difficult to envisage such a defensive capitulation with Leah Williamson on hand to cover.

Neville’s response was swift enough to stem any potential tide. Georgia Stanway seemed like a questionably attacking player to bring on while defending a one-goal lead, but it worked. As short as the 20-year-old’s cameo was, she redressed the balance of the game in England’s favour.

In doing so, she bought Neville time: to experiment, to change. He has already made it clear that he has no defined starting line-up, both through his selections and his statements, while 4-2-3-1 finally seems his most favoured of a number of tried and untested formations. This, England’s first opening-game win at a World Cup since 1995, earns him just enough credit to continue tampering.

He might eventually stumble upon a winning formula; he might not. England undoubtedly have the perfect ingredients for success. In Bronze, Bright, Parris, Fran Kirby and Jill Scott they have a phenomenal spine. It is just a matter of finding the right blend at the right time.

With Australia stunned by Italy earlier on Sunday, and Germany edging past China by a single goal on Saturday, only France of the pre-tournament favourites had made a statement in their opening game. Echoes will hardly reverberate at this win, but this England “train” is at least on the right track.