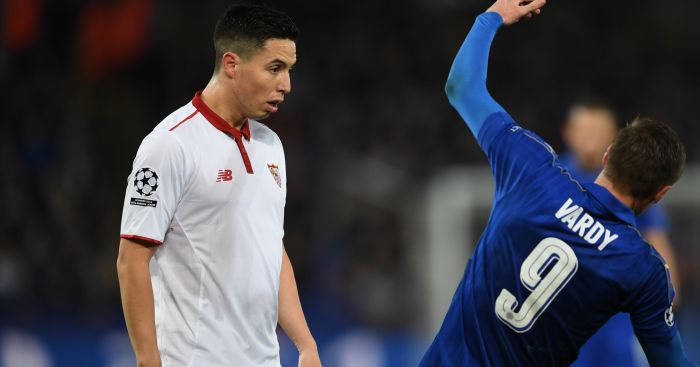 When Samir Nasri‘s agent flicked through his Rolodex looking for a Premier League club who might be willing to chuck huge wages at an unfit, 30-something free agent who hasn’t played football for a year, the name of West Ham must have made him giddy. And apparently it was a productive conversation.

Indeed, reports suggest the Hammers flew Nasri in to to London wrap up a lucrative short-term deal, but a quick look at the condition of the former Manchester City playmaker – who has been banned from football since January – made the club think twice. Especially since Nasri was being offered an initial six-month contract worth anything between £80,000 and £95,000 a week, depending on which report you read.

A year ago, when Nasri last kicked a ball, you would expect the Hammers to be sufficiently blinded by the player’s profile to ignore the warning signs. But attitudes seem to have shifted at the London Stadium and West Ham are slowly shedding the travelling circus image of the first two years following their move from Upton Park to the Olympic Park.

It is understandable that West Ham were tempted to take a punt on Nasri. The France international with 41 caps played some of the best football of his career under Manuel Pellegrini at Manchester City and, even though that was almost five years ago, the Hammers boss has something of a creativity issue to address. Mark Noble is the only West Ham player with more than a single assist this season and with summer signing Andriy Yarmolenko ruled out for the campaign, Pellegrini’s desire to reinforce his attack is fair.

If Nasri was immediately available and he hadn’t flown in overweight, then the deal would be considerably more attractive. But he isn’t, and apparently he did. The 31-year-old can train with a club this month but his ban runs until January. After a year of inactivity – he last played for Antalyaspor in the Turkish league on November 26, 2017 – how long would he take not only to shift the excess timber but to get up to Premier League match speed?

The idea has the hallmark of Davids Gold and Sullivan, co-chairmen who have always struggled to resist a headline-grabbing name. But, after the furore they faced over the stadium move and their previous transfer dealings, it seemed the penny had finally dropped by the end of last season.

What followed was an uncharacteristically serene summer of astute recruitment which sensibly addressed most of the issues Pellegrini discovered when appointed in May. West Ham broke their transfer record twice, first to sign Issa Diop for £21million, before agreeing to spend potentially double that amount on Felipe Anderson. The Brazilian forward has had an encouraging start to his Hammers career, while Diop has already made a ‘monster’ impression alongside another bargain, Fabian Balbuena.

Elsewhere, Andriy Yarmolenko was reasonably priced at £17.5m; Jack Wilshere arrived on a free and seemingly keen to prove a point, so long as his body allows him; out-of-contract Ryan Fredericks came in as a long-term replacement for Pablo Zabaleta. The signing of keeper Lukasz Fabianski for £7million gave Pellegrini and West Ham an entirely new defensive spine.

Manuel Lanzini’s injury was one of the few lows of the summer and Pellegrini’s budget clearly did not stretch to a replacement for the Argentina attacker, so Nasri’s free agent status naturally appeals. But apply the context of timing and the gamble appears more unnecessary.

Nasri’s ban gives him until January to get into shape but he cannot play any matches before the New Year, when the Hammers could instead look to recruit ready-made reinforcements if Lanzini’s summer prediction of a return to action early in 2019 proves to be overly optimistic.

The timing isn’t ideal, and there is a large body of evidence that suggests nor is Nasri’s attitude. “I would like to give him a punch,” said Roberto Mancini once after becoming exasperated with his inconsistency, while one City insider said of Nasri last year: “He has an arrogant attitude and doesn’t appear to care… The club can’t wait to get rid of him.”

His behaviour also led to Nasri being exiled from the France set-up – a sanction he received by insisting he would never return even if his dad was the coach – and a common theme throughout his career seems to his belief that he has never received the platform he feels his talent deserves. Rather than fall into line, Nasri too often bristles with frustration and his reaction to adversity or criticism is rarely positive. Perhaps in the last 12 months he has reflected on his own shortcomings in failing to fulfill his potential, but only a changed character would benefit the Hammers in the short term, especially given the reported salary at stake.

Appearances matter to the West Ham owners and offering Nasri such a contract while haggling so intensely over Declan Rice’s contract is not a good look. It is hardly a case of one or the other, but the Hammers chiefs would be wise to exercise more of their caution on Nasri, a falling star in a seemingly irreversible descent.