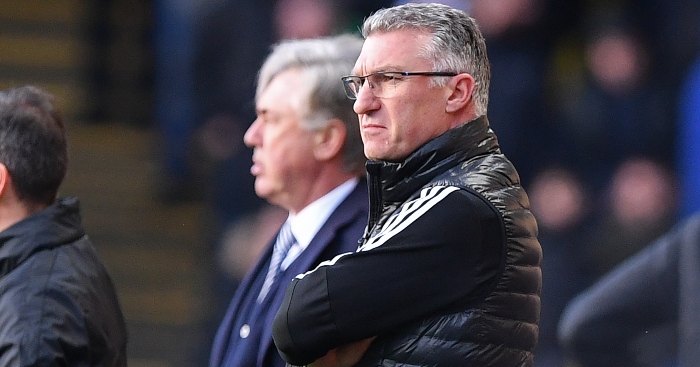 Watford and Everton have spent the last couple of years fighting over the same imaginary girlfriend. Now, with the Marco Silva myth exploded and the hostility drained from this game, it just leaves two teams who are less than they should be, arguing over the Premier League’s lesser positions.

Everton can probably afford to drift off and wait for the season to tick over. Carlo Ancelotti is here in body and has overseen an improvement, but he and his side bear no real relation to each yet. One doesn’t obviously belong to the other and some of his biggest challenges still await. What to do with Alex Iwobi and Theo Walcott? An ageing Gylfi Sigurdsson? These are questions for the summer; until then, Everton and their manager have only the loosest connection.

Watford’s need is more pressing and, for 40 minutes, this was a whole-hearted response. Adam Masina gave them an early lead, collecting a pass from Gerard Deulofeu before drilling a finish across Jordan Pickford. Then Roberto Pereyra doubled their lead. He was put in by Troy Deeney and, again, Pickford was left on his back.

They deserved their advantage. Nigel Pearson has pushed Abdoulaye Doucoure further forward, sitting him behind the forward line and ahead of Nathaniel Chalobah and Etienne Capoue. Against an Everton two of Sigurdsson and Delph, a combination which was asking for trouble, they were dominant, more optimistic and – frankly – better.

But then: chaos. Two badly-defended corners in first-half stoppage time and two goals from Yerry Mina. It was a windy, awkward day at Vicarage Road, with a cold sun dancing above the lip of stands. Ben Foster lost the ball twice in the glare and by the time he found it, each time, it was in his net. Nobody really knew how the game was level, least of all Everton, who had generally played with a stunning flippancy.

When the players re-emerged after the break, it was clear just how lost Watford had become. Suddenly, every Everton pass was into space and Richarlison, Walcott and Iwobi were driving down open roads instead of into cul de sacs.

Those are revealing moments. It becomes obvious very quickly when a team is listing. It usually takes just two or three hacked clearances for the crowd to sense it and, from that point on, the dread only grows. Every pass becomes an event. Each attack faced draws a collective of breath.

It shows in the players, too. In who wants the ball and who just wants the game to end. Watford were able to lean on their usual pillars – Deeney and Capoue stood tall enough – but everything else around them crumbled. Or would have done, had Fabian Delph not needlessly got himself sent off 20 minutes before the end.

With Delph, Everton had begun to control the middle of the pitch. Without him, they folded back into their own box, appearing happy to sit and clear for the rest of the game. Never did Watford really threaten a winner. That was twenty minutes of lateral passing and hopeful crossing – the kind of passages players put together when they hope someone else will be the hero – and, a scramble or two aside, the visiting defence dealt comfortably with everything they faced.

And somehow they sprung one last counter-attack, too, from which Theo Walcott would reach a loose ball first and and win the game. Credit to Everton belongs to a different article. Good for them. Well done. Aren’t they plucky. Etc. Etc.

But the phase which gave Walcott his goal was indefensible. To be caught in that position, with one deep defender facing three breaking forwards, described precisely the sort of thoughtlessness which had blighted Watford’s afternoon. It showed, also, that the recent recovery under Pearson, impressive as that has been, has to be considered illusory.

After all, one mistake at 2-0 and had brought the old psychoses flooding back. Another, to make it 2-2, and the hosts were mired back where they were under Quique Sanches Flores, with all their attacking threat having receded away.

Pearson bellowed from his technical area. Craig Shakespeare, his assistant, shouted and pointed too. But nothing they did had any effect. This is their failure, too. They’ve inherited a damaged group of players, including one or two who probably don’t want to be at their club, but that shouldn’t hide their tactical culpability or excuse the substitutions which instructed this defeat.

Danny Welbeck? He’s broken player who needs to be nursed back to confidence. That time isn’t at 2-2 in a game which needs to be won, over which control has been lost. Isaac Success? That time is… never. Success would presumably be on the first train out of town if he could find anyone to pick him up from the station. The crowd don’t like him, he senses that, and he spent the final quarter of the game, when there was an advantage to press home, getting in the way and falling over.

So this was a dismal afternoon. Pearson was pragmatic with the press afterwards. He even tried to sound cordial as he stared down their questions, letting them hang in the air before volleying back in that strange, passive-aggressive way.

“Naivety? In what sense?”

A disaster. This will be the kind of loss which leaves a mark.