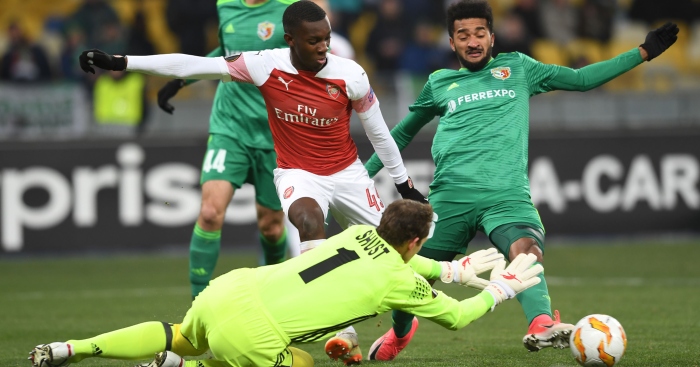 Unai Emery did a commendable job in summoning some enthusiasm for Arsenal’s trip to Ukraine where, less than 70 hours before the manager’s first north London derby, he took his already-qualified Gunners to face the already-eliminated Vorskla Poltava.

The hosts, playing 200 miles away from home, failed to muster similar appetite and the enthusiasm of youth was enough to give Arsenal the simplest of wins and warm their manager’s cockles in the minus-12, bone-chilling conditions.

Aaron Ramsey, seemingly very much a part of Arsenal’s past, had his penalty sandwiched by first-half strikes from two players with a great chance of playing a role in Arsenal’s future. Emile Smith Rowe opened the scoring with his third goal in four appearances before Joe Willock killed the tie four minutes before half-time with his first senior goal.

The only member of Emery’s youthful front three not on the scoresheet was perhaps the prospect most in need of a goal. None of Arsenal’s teenagers – there were six on the field at full-time – had more to gain from an impressive performance in the freezing Olympic Stadium than Eddie Nketiah, who has had to wait for his chance under Emery. Upon reflection, the 19-year-old striker will wish he had done more with it.

Danny Welbeck’s season-ending injury in Arsenal’s last Europa League tie at home to Sporting Lisbon has cleared the road to the first team for Nketiah. “The first thing is to look inside,” said Emery when discussing how the Gunners might go about replacing the England striker. “We have a striker who is working well in the under-23s and improving also – Eddie Nketiah.”

If this was an audition, the England Under-21 forward did enough to earn a call-back in the dead rubber against Qarabag, but Emery will be looking for more reassurance before offering the youngster a leading role this season.

Nketiah offered an uncannily-realistic portrayal of Welbeck. He ran tirelessly and offered occasional glimpses of creativity and unpredictability around the box but, most crucially, his finishing was poor. With a chance in either half, Nketiah fluffed his lines, first slicing high and wide after drawing Vorskla’s keeper from his line, before miscuing when presented with time and space in the box during the second period.

Arsenal’s no.49 played a direct role in their opener which came after some neat combination play with Ramsey. Nketiah bundled his way beyond the last defender but with control of the ball proving elusive, it fell to Smith Rowe to tidy up by stroking the ball into the net, making the finish look more simple than it probably was.

Nketiah’s reaction to that chain of events is open to interpretation. Upon the ball nestling in the net, Nketiah’s impulse was to put his hands to his face in apparent dismay that his chance had passed, even if Arsenal had eventually taken theirs. He carried that air of desperation into the box for most of the night, especially during a second half that saw a number of colleagues go for goal from rather more acute angles than where Nketiah was stood – not always in space.

Nketiah was the keenest of the front three to impress and Smith Rowe probably the most likely, but Willock furthered his prospects most.

The 19-year-old made Premier League appearances at Newcastle and Manchester United under Arsene Wenger last season but his first involvement under Emery was capped with a splendid goal. Willock collected the ball from Mohamed Elneny after yet another Vorskla mistake before driving towards the penalty area and using a retreating defender as a screen from behind which he cooly rolled his shot into the far corner. It was the type of finish that may have reminded Arsenal of someone…

Emery’s first priority was to get the win required to seal top spot in the group in a hassle-free manner. That aim and an 18th game without defeat was achieved with two-thirds of the game left. The rest of the freezing night enabled the manager to take a more careful look into Arsenal’s future. The front three all demonstrated that they can form part of it, but Nketiah still has to show that he can feature more prominently in the present too.