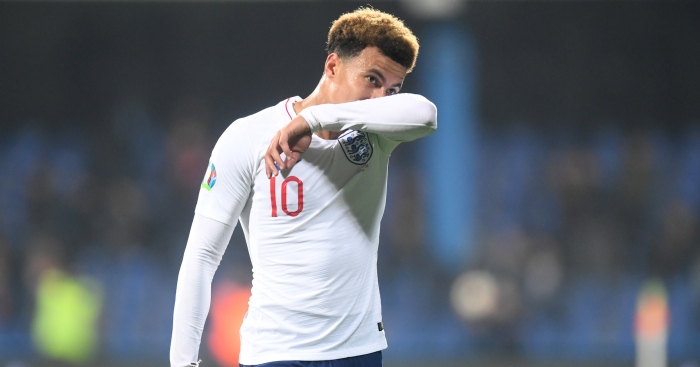 After naming another squad heavy with full-backs, England coach Gareth Southgate was asked why he had omitted James Maddison, the Leicester player who has created more chances in the Premier League this season than any other player. “I think he’s a number 10 and, at the moment, we’ve not been playing with a 10,” he said. This latest incarnation of England is all about pace on the flanks; there is no space for what one F365-er used to call ‘the cheating position’ – the No. 10 looking for knock-downs, playing one-twos on the edge of the box and ghosting in at the back post for headers. There is no room – some might say – for Dele Alli.

Southgate continued: “In the 10 position we’ve also got Dele and Raheem, Marcus, Jesse, although Jesse is not available this time.” The interesting thing about that list of potential options for a position currently unavailable is that Sterling, Rashford and Lingard have all largely played wide for England since Southgate switched to a 4-3-3 six unbeaten games ago; the odd man out is Alli, who lacks the raw pace to play out wide so is instead shoehorned into a midfield role which really does not suit his skill-set. Parked to the left of a defensive midfielder, he looks a little lost; it is hard to argue that an England side playing this formation should feature the man whose No. 10 shirt must feel like a cruel joke.

For Spurs, he has thrived in a central position just behind Harry Kane and/or Son Heung-min, though this injury-hit season has been far from his best. For England, he has become an oddity, a luxury player in a system that does not really allow for luxury. Against the Czech Republic and Montenegro, he took not a single shot and created just one chance across two games; his performance in the former was described as ‘mature if unspectacular’ by The Guardian, who then said he was ‘a little below par’ on Monday night, when his 5/10 actually matched his score from several other England games. For his country, ‘par’ has been about 5/10 for some time.

For all the fuss on Monday about the ‘ruthless’ Southgate potentially dropping Alli, the Spurs man has completed only six games for England under this manager. He was dropped for the key Nations League qualifier against Croatia in December, and this week completed little more than an hour in both Euro 2020 games. No player has been substituted more times by Southgate during his England reign.

There were hints even a year ago – when England were playing with a 3-5-2 – that Southgate did not quite know how to use Alli, who played just 22 minutes across two friendlies just months before the World Cup. “I have a problem because I have Rashford, Lingard, Sterling, Kane, Alex Oxlade-Chamberlain and Jamie Vardy so there is a huge choice,” said Southgate. “I don’t foresee a scenario where any of those players don’t come to Russia but I have to make those decisions. There is no reason he [Alli] will not come and he can make a huge impact there.”

In the end, the unforeseen scenario was that Oxlade-Chamberlain would get injured, handing Alli a World Cup starting XI place almost by default. Even after victory over Sweden in which he scored, there were questions about his suitability to the role, with the Daily Telegraph’s Matt Law saying: “It is taking him time to adapt to the position he is playing to the left of Jordan Henderson in the middle of the park, rather than further forward where he plays for Spurs. He is not at his best in that position yet and he is having to learn it on the job. I think that’s an issue.”

Almost nine months later, it is still an issue with a different formation. Right now, it’s difficult to argue in favour of his inclusion over Ross Barkley, who has outscored Alli in fewer international games and is now several rungs above him in the England ladder. He is playing in the same 4-3-3 system for his club and it shows. For all the talk of Maurizio Sarri stifling Barkley, he has actually scored or assisted seven Premier League goals, the same total produced by Alli this season in more minutes and from a more advanced position. If they are fighting for one spot against better opposition than Montenegro, then Alli will surely be watching from the bench.

After all, he’s a number 10 and, at the moment, England have not been playing with a 10.