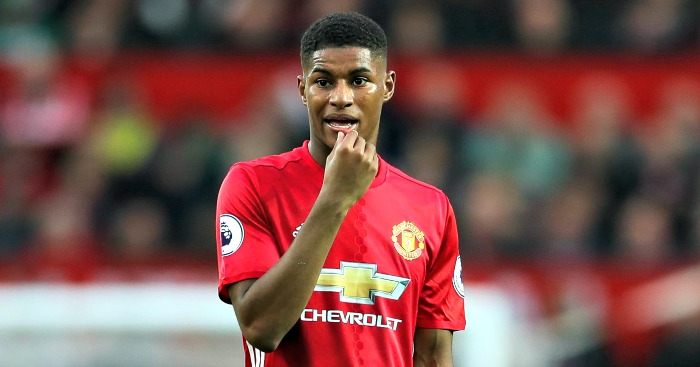 “It is frustrating but I’m not angry that I’m not playing because I understand it’s difficult,” said Marcus Rashford in September, in response to questions over his lack of Manchester United playing opportunities under Jose Mourinho. “We have a lot of big players and a lot of players in my situation as well who are not getting the minutes they probably thought they deserved to get.”

Given those frustrations, Rashford may be surprised to learn that he is one of a kind in the Premier League: a teenager playing regular football.

A list of players currently aged under 20 with five or more league appearances in Europe’s top five leagues contains 57 names. Ligue Un is (perhaps predictably) the largest provider, with 22. Next comes the Bundesliga with 15, then Serie A with 12 and La Liga with seven. That makes 56; Rashford is the sole Premier League representative.

Earlier this week, the CIES Football Observatory produced a report that extended that statistic across Europe, with similar results. It revealed that 87 teenage footballers had played 60% of their side’s league minutes by the end of November. Rashford (placed in 78th with 62%) is once more the only Premier League player who qualifies.

The lack of minutes afforded to young English players is a well-documented but important argument, inevitably framed in the context of our national team’s failures. Yet these latest statistics go beyond patriotic concerns. It is not just domestic teenagers who are unable to gain a foothold in the Premier League, but teenagers of any nationality. That suggests that the issue lies with the league rather than the players.

Young Premier League players are left waiting for an exceptional circumstance. Ifs and buts aren’t candy and nuts, but if Anthony Martial had not got injured in the warm-up against FC Midtjylland, Rashford would not have started the game in February. It’s hardly a huge leap to suggest that his chance of regular starts may never have come under Louis van Gaal. Would Jose Mourinho’s arrival have really changed that? His record with young players suggests not.

The obvious reaction is to suggest that the use of teenagers correlates with the standard of team or league, thus explaining Ligue Un’s high figure. Firstly, that does not account for the relatively high figures in Serie A and Bundesliga, but also the theory of ‘worse teams use more teenagers’ does not stand up to scrutiny. Nine of Germany’s current top ten are represented in that original list of 57, and three of Serie A’s top six.

The supposition that English clubs loan out their teenagers rather than play them partly accounts for the shortfall. Chelsea have loaned two teenagers to clubs in Europe’s top five leagues (Jeremie Boga and Victorien Angban, both at Granada) but only Boga makes the list of 57. No other Premier League club is represented.

Instead, the Eredivisie (now Europe’s 13th-ranked league) has become the temporary home for many. Marlos Moreno, Oleksandr Zinchenko and Enes Unal are merely the Manchester City players currently at risk of a condition we can call Lucas Piazonitis. Signed in March 2011 at the age of 17, Piazon is still a Chelsea player, now on loan at Fulham after spells with Malaga, Vitesse, Eintracht Frankfurt and Reading. It’s too sweeping to say “well if he was good enough, he’d have made it by now”. At a club where Piazon could have been cherished and played, he may have become a better player. Vital years have been spent as a footballing nomad.

Nor are the Premier League academies filled with Europe’s best young talent, neither loaned out nor given first-team opportunities. Chelsea are the only top-flight representative to make waves in the UEFA Youth Champions League, with no other English club reaching the semi-finals since the tournament began in 2013/14. This season, both Arsenal and Tottenham were knocked out in the group stages.

The simple explanation is that the Premier League’s transfer activity is increasingly focused on developed (or at least developing) players, the enlarged broadcasting deal persuading clubs to pay the premium for finished products. This is the result of a division engorged by rich clubs. Deloitte’s latest money league (for the 2014/15 season) had 15 current Premier League clubs and two Championship clubs in Europe’s top 30 by revenue. If you were given £500 to buy a cake, you wouldn’t be pondering brands of flour, butter and eggs, but whether your delicious treat will have one or two tiers.

The Premier League’s chronic short-termism also doesn’t help, where one or two mistakes become back-page proof of your ineptitude. Managers are asked for continuous improvement, to bolt pieces together while running at full speed. Criticism of Bob Bradley this week accused him of an inability to recruit players intelligently before he’s even been given an opportunity to do so. Buying players, not improving or educating them, becomes the prized skill. Young players understandably get overlooked.

There are exceptions, of course. Another CIES report on the average age of squads in Europe’s top five leagues had Tottenham as the Premier League’s only representative in the top 15 (in 15th), with Liverpool also in the top 20. Both clubs are coached by managers with an established and commendable commitment to offering young players a chance, but in both cases that philosophy will be tested when the performance of the team comes under scrutiny.

You may be thinking that this is a misplaced worry, that the cream will always find a way to rise to the top. Yet there is a question to be asked: Is a Premier League academy the right place for a talented young player?

“The way they showed an interest in me and gave me the feeling they really wanted me convinced me,” said Ousmane Dembele when joining Borussia Dortmund. “Dortmund are the perfect club for young players, the past has shown that.” Renato Sanches’ words mirrored Dembele’s when discussing why he chose Bayern Munich over Manchester United, while Breel Embolo reportedly rejected the same club in favour of Schalke. Jean-Philippe Mateta (Lyon), Oliver Burke (RB Leipzig) and Gabriel Barbosa (Inter) also spurned Premier League offers, citing a desire for regular football.

Many others will surely follow suit. In March, the Daily Mail picked their top ten teenagers in the world, which included Embolo, Dembele and Sanches and suggested potential next destinations for all ten. Manchester United and Arsenal were linked with five, Manchester City four, Chelsea three, Liverpool and Tottenham two and Everton, West Brom and West Ham one. Three have since joined Bundesliga clubs and become regulars, one has played in the Champions Legue for Juventus (Moise Kean) while two moved to the Premier League. Keep a look-out for when Tahith Chong (United) and Lorenzo Gonzalez (City) break into the first teams in Manchester.

For all the talk of youth development and coaching standards, the biggest test of an academy is not the improvement of players but their progression to the first team. Competitive football (no, not the Checkatrade) is the most vital part of a young player’s development.

By that measure, the Premier League is falling further and further behind, suffocated by its own wealth. The highest level of English football is struggling to provide those teenage kicks.