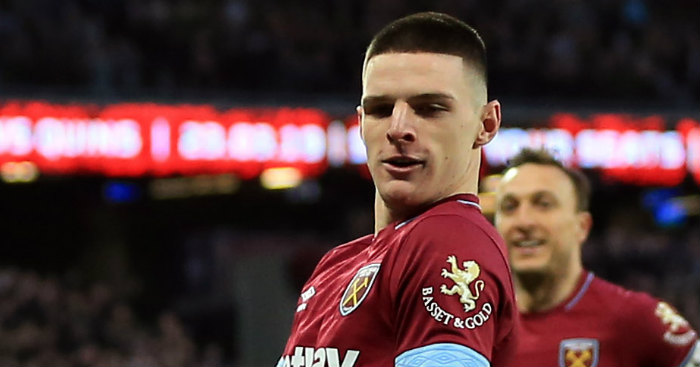 On the occasion of Billy Bonds having a stand named after him, the names on the scoresheet could hardly have been more apt: Declan Rice and Mark Noble.

Bonds made a record 799 appearances for the Hammers between 1967 and 1988. 31-year-old captain Noble will likely reach 500 around this time next year having made his debut in 2005, and has long passed the club’s Premier League appearance record. And 20-year-old Declan Rice stands on the verge of an England call-up, having been hugely impressive since moving from defence to central midfield this year.

These three men represent the past, present, and future of West Ham. All of Bonds’ home games were played at Upton Park, Noble captained the side through the move to the London Stadium, and Rice emerged too late to ever call the old stadium home.

Every club is proud of the youngsters they have produced, but West Ham have particular cause to puff out their chests: this is the club that produced Bobby More, Frank Lampard, Trevor Brooking, Paul Ince, Michael Carrick, Joe Cole, the other Frank Lampard, Jermaine Defoe, and Rio Ferdinand all cut their teeth with the Hammers.

What you may notice from that list, though, is that their more recent youth products have tended to move on upon reaching a certain level before going on to enjoy more illustrious careers, and again, West Ham are not unique in this. It is only natural that the big teams hoover up the best and brightest from elsewhere in the league.

But in Noble, West Ham have one of England’s few current long-standing one-club men (we’re not counting two short loan spells at Hull and Ipswich, so there). It helps, of course, that the ceiling on Noble’s abilities makes him a natural fit for what has primarily been a mid-to-lower table side, with a couple of relegations thrown in. He has never quite been a top six, international-calibre player, which is by no means a knock or an insult, especially as he has something more important: he is loved and respected by his hometown fans.

In Declan Rice, though, West Ham may have got them a man who does both. The midfielder has been excellent all season, putting older players in the shade with some surprisingly tactically and mentally mature performances in a defensive midfield role since Manuel Pellegrini moved him out of the back four upon the manager’s arrival at the club.

As with Sean Longstaff – the emerging Geordie who Rice found himself going head-to-head win on Saturday evening – the fans love to see local boy do well, and like Newcastle, West Ham supporters have had to put up with more than their fair share of strife and disgruntlement over the years.

That only makes figures like Noble and Rice all the more important; it gives them something they can latch onto in difficult moments, and a feeling that the club still has a future, and things can still happen that will bring them proper joy. That can be vital in creating a new buoyancy in mood, which in turn can lead to good things happening on the pitch.

You can see the effects of that feelgood factor beginning to take hold at the much-maligned London Stadium, a ground that previously didn’t feel any more like home than a newly-built Travelodge would feel like your own house, but has now overseen six consecutive home games without defeat since the turn of the new year: four wins, including one over Arsenal, and two draws, including one with Liverpool.

Rice may well move on in time if his talent and ambitions outgrow the club; that is the modern way. But for now, with Bonds’ name on the stand, Noble and Rice on the pitch, and results going the right way, Hammers may actually begin to feel a bit more comfortable in their still relatively-new home.