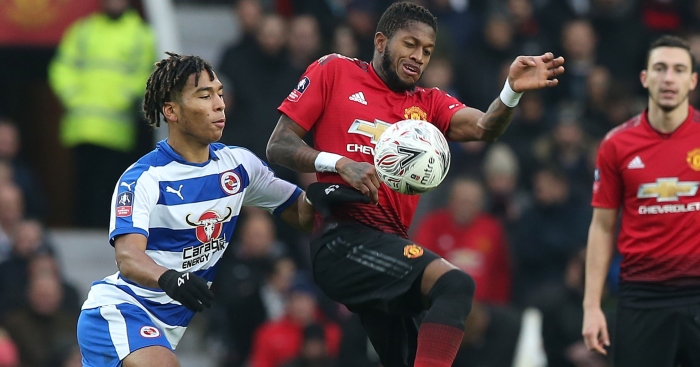 Very little about Manchester United since Jose Mourinho’s departure has reflected well on their former manager but the Red Devils’ midfield in their FA Cup win over Reading suggested that perhaps his judgement wasn’t entirely skewed during his final months at Old Trafford.

In the four Premier League games since Ole Gunnar Solskjaer took over, with little to lose, the Norwegian has helped inspire individuals, no one more so than Paul Pogba while Ander Herrera and Nemanja Matic have also relished the fresh start under a less conservative regime.

The caretaker boss gave two more midfielders the platform to prove Mourinho wrong too, and another the chance to prove the ex-manager right. All three failed to make their point, leaving Solskajer’s first-choice engine room feeling as snug in their places as anyone can be at the start of a new era.

Aside from Matteo Darmian, few others in Solskjaer’s much-changed line-up seized their opportunity and Andreas Pereira and Fred demonstrated why Mourinho was reluctant to trust either Brazilian with a regular place in his team.

Pereira’s urgency to impress was perhaps greater than anyone else. He is almost four years and three managers on from his debut in United’s first team but he seems further from a regular place than ever before. Fred is a far fresher face but patience of the type afforded to an academy graduate will never be bestowed upon a £52million summer recruit. He too is struggling to carve out an Old Trafford career.

The visit of a Reading side in free-fall towards League One on the back of a 10-game winless run was the perfect opportunity for the Selecao pair to restore some credibility. At Old Trafford, the onus was on them and McTominay to set the tempo and drive United forward. Instead, the trio spent much of the game chasing Andy Rinomhota, Liam Kelly and John Swift.

Of the outfield Royals who finished the game, only one – 18-year-old centre-forward Danny Loader – had fewer touches on the ball than Periera and McTominay (Fred was hooked on the hour) while Rinomhota, Kelly and Swift all made double the number of passes compared to Solskjaer’s midfield three. Their dominance helped Reading enjoy 60 per cent of the possession at Old Trafford and had that quality in the midfield extended to the attacking third, then Solskjaer would not have been sitting quite so comfortably in the second period.

Welcome to another episode of Good or Just Taller Than Other Boys His Age? Today’s contestant is Scott McTominay

Pereira and McTominay came through United’s academy but neither are rookies. At 23 and 22 respectively, both are at least a year older than Marcus Rashford yet who really knows what outstanding qualities either offers?

Mourinho appreciated McTominay’s work-rate and his attitude which are both creditable traits but so much more is demanded of a United central midfielder. Another of the ex-manager’s favourites Matic has been able to alter his focus under new leadership; McTominay appears far less equipped to do the same.

By reputation, Pereira is a more technical operator, one comfortable in possession with a creative eye. In reality, we have yet to see that in Solskjaer, Mourinho or Louis van Gaal’s first-team and the Brazilian Tom Cleverley will surely have to start thinking with greater intent over the options he supposedly has away from Old Trafford.

Fred’s mitigation is that he is new to all this. He would not be the first South American midfielder to struggle in his debut season in the Premier League before eventually finding his feet in England. But anyone looking merely for encouragement over recent months has had a fruitless search. Mourinho said he could not afford to field the Brazil international while the defence behind him remained so flimsy and after today’s victory, Solskjaer might be similarly reluctant to take the risk. The 25-year-old was replaced minutes after being sent for a bus by Sone Aluko’s dummy on the edge of the United box, just prior to smashing a free-kick straight out of play when trying in vain to find Diogo Dalot.

The midfield’s struggles perhaps did not do the forward line many favours, but the pair with most to prove, Alexis Sanchez and Romelu Lukaku, did themselves little justice either.

While Old Trafford anticipated a Pogba-type revival from Sanchez, the Chilean was kept largely on the periphery before being withdrawn with what appeared to be another hamstring problem. Lukaku netted again but the centre-forward prompted more groans than gasps from an unusually boisterous crowd. ‘Redefine touch’ was the message beamed from the advertising boards and you could be forgiven for thinking it was a sentiment aimed directly at the £75million striker.

Still, this was not an afternoon without its bright spots for Solskjaer. A fifth victory, consecutive clean sheets, another youngster blooded, and momentum retained before the manager takes his squad to the sunshine of Dubai ahead of his first big test at Tottenham next week. By which time today’s midfield will be banished back to the sideline, where they appear destined to stay.