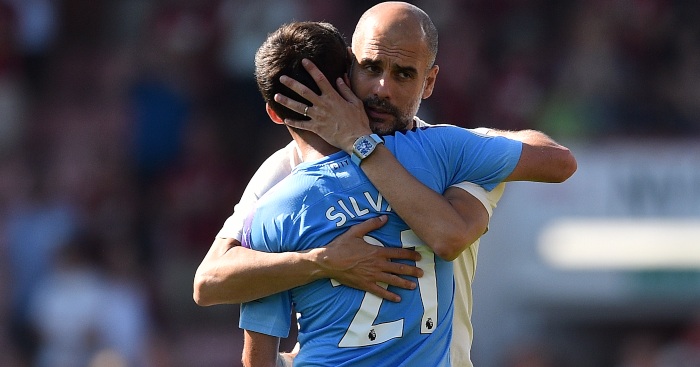 Despite Pep Guardiola’s relentless drive for progress, the Treble winners still remain indebted to a pair of old timers ingrained in the history of Manchester City.

Sergio Aguero scored a brace while David Silva created two goals as City returned to winning ways at the Vitality Stadium following the concession of a couple of points to Spurs last weekend.

On paper, it was the ideal assignment for City to kick-start their momentum. The champions are the only top six side Bournemouth have never beaten, while City’s 100 per cent attainment in eight games against the Cherries stood as the best record in top-flight history. After a ninth consecutive win, the aggregate score since Bournemouth were promoted to the Premier League now stands at 28-4.

But City were made to sweat more profusely than many might have expected in the south coast sunshine. Having not managed a single shot on target the last time they hosted the Treble winners in March, the Cherries tested Ederson on the opening minute before getting several sights of the City keeper’s goal. Superb blocks from the Brazilian either side of half time and another couple late on denied kept Bournemouth at bay. It was no wonder that when the Ederson was beaten, it took a free-kick from Harry Wilson that is unlikely to be bettered this season.

If at full-time Guardiola was in the mood to dish out pats on the back rather than lectures, then Ederson may have had to get in the queue behind Aguero and Silva.

For both City veterans, 400 is the magic number this weekend. Man-of-the-match Silva’s pair of assists, his 131st and 132nd for City, marked his 400th appearance for the club. Aguero’s second goal to kill off the hosts’ rally was the 400th of his career.

It doesn’t seem to have dawned on anyone outside the Etihad yet that Silva won’t be blessing us with his presence for very much longer. Watching the Spaniard orchestrate City from the left of midfield, there appears no obvious reason why he could not reach 500 appearances. The vision remains as sharp as ever, as the pass he played through Bournemouth for Sterling to score City’s second showcased. The incision he cut through the Cherries defence with a driving run to tee-up Aguero’s second indicated the speed off the mark remains, though Silva’s game has never been about his physical qualities. While Merlin can still misdirect his opponents with precision-weighted passing and the ability to pop up out of nowhere, is it really selfish of us to want him to perform on our stage?

After a 10-season stint pulling City’s strings, no one could begrudge Silva the chance to return home next summer, nor his reasons for wanting to do so. City certainly don’t. They have known Silva’s intentions for quite some time – long enough so that the two candidates most qualified to replace him can learn on the job from the master. Bernardo Silva showed last season he is ready to fill his namesake’s boots, while the only silver lining to David Silva’s departure is the chance for the rest of us to see Phil Foden shine.

27 – Sergio Agüero and David Silva have now combined for 27 goals in the Premier League – the only duos to combine for more are Thierry Henry and Robert Pires (29) and Didier Drogba and Frank Lampard (36). Tandem. pic.twitter.com/HXTlWQJNZM

In contrast, Aguero is stubbornly refusing to budge. Guardiola has tried to ease City’s record goalscorer out of the picture before, two years ago, when he identified more with Gabriel Jesus’ natural talents. Even this season, it was Jesus who began the campaign at West Ham. Aguero came off the bench at the London Stadium and promptly began his scoring run that has seen him net in all three games so far, with four in total.

Like Silva, Aguero has spoken of his desire to return home and play for Independiente. A decade’s worth of service might also be his cue to make that move, with his current contract running until his 33rd birthday at the end of next season. Aguero appears determined to go out on his terms, according to his timetable, regardless of how speedily Guardiola might have wished to implement his succession plans.

The City boss maybe had it in mind to usher both away from centre-stage by now. But Silva and Aguero continue to write their own scripts. The rest of us should just enjoy the show while it lasts.