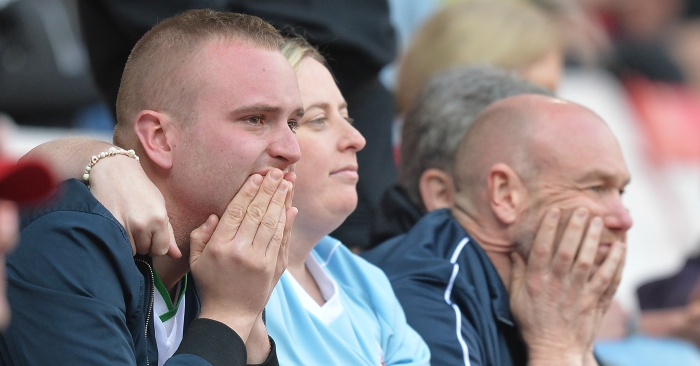 In August 2016, Sunderland chief executive Martin Bain announced that the club would begin the process of replacing the Stadium of Light’s pink seats, faded from red over the preceding 19 years. “It is a magnificent home for our football club and we want to ensure that it is a stadium our fans can continue to be proud of,” he said.

Twelve months later, that project had been shelved. Sunderland decided, following relegation from the Premier League, that the £500,000 cost of replacing seats discoloured by almost 20 years of sunlight could no longer be afforded. Perhaps it was a prescient move on Bain’s part: this club has not seen sunshine for some time. Just as the stadium’s seats continue to fade and its facilities become outdated, so too this club slides further into ignominy.

If hope is the last thing to die, Sunderland supporters are busy arranging the funeral. On Saturday against Burton Albion, their team took the lead in a must-win game before succumbing to the home defeat that condemned them to successive relegations. One of Burton’s goals was scored by Darren Bent, Sunderland’s former record signing. When Bent signed for the then Premier League club in 2009, Burton had never even played a match in the Football League.

If the manner of the final wound of the thousand different cuts was difficult to stomach, Sunderland supporters cannot have been surprised by the eventual demise. Home season ticket holders have witnessed just five home wins in their last 41 league matches since the beginning of last season, the worst record in English professional football over that period by some distance. To them, the Stadium of Light has become the Palladium of Sh*te. Or Estadio da Lose, if you prefer the sexy Portuguese translation.

It is tempting to recount this as one man’s tale of woe. Former chief executive Margaret Byrne received deserved flak – and eventually quit the club –  over her gross mishandling of Adam Johnson’s criminal offences, while replacement Bain has collapsed in the same role, but football clubs succeed and fail from the top down. Owner Ellis Short is king of this strife-dom.

In September 2008, Short acquired a controlling stake in the club that sat eighth in the Premier League. His assessment that Sunderland’s natural place was seventh in the top flight as recently as November 2017 looked farcical, but had his own reign not become a ‘how-not-to’ guide to football club ownership, top half in the top flight would have been perfectly achievable. In total, Sunderland have won 88 of their 381 league games in two divisions during his tenure – just over 23%.

Short has been in place during a period of vast revenue increase amongst Premier League clubs, including broadcasting deals of a value that he could not have predicted. And yet UEFA’s latest benchmarking report (published in January) reveals that in 2016, Sunderland’s debt was the third highest in England at £139m. Since then, they have been relegated from world football’s most lucrative league. Amongst significant competition, it is a stunning piece of mismanagement.

Short’s party trick has been to hire and fire managers with gay abandon, but without having processes in place to avoid each one arriving with their own list of transfer targets and promptly working their way through that list. In less than a decade of Sunderland’s 138-year history, Short has appointed 31% of all their permanent managers.

If the managerial appointments have failed to work, the sporting directors entrusted by Short to assist with transfer dealings were worse. Italian Roberto de Fanti’s ten-month reign saw 14 players arrive. Combine those sprees with regularly changing managers bringing their own targets, and you are left with a bloated squad on high wages and with little motivation to leave or play.

In the last five years, seven different Sunderland managers have signed 44 different players on permanent contracts, some as long as five years in length. In their statement following Saturday’s confirmation of relegation, Sunderland referred to a forthcoming ‘period of uncertainty’. You’d forgive supporters for failing to notice the drastic change.

The possible short-term future is that Sunderland enter administration if a buyer cannot be found, and no sensible purchaser would make their move until administration happens and the club is available for a comparative song. When economic despair is the obvious solution to semi-permanent winter, no future should be considered bright.

There is therefore not an awful lot of collective sympathy for Sunderland, a club who have sleep-walked into their own financial catastrophe through a commitment to quantity over quality. Sympathy is reserved for those who never get a chance rather than those who repeatedly blow their opportunities. Yet scratch a little deeper – or just look beyond Short’s incompetence – and there is a real tragedy.

Sunderland is a city fighting the tide. In some areas, close to half of all children are living in households in poverty. In an area that already deals with a considerably higher unemployment rate than the national average and feels shunned by southern politicians, the relegation will decimate families. The economic risks of Brexit continue to haunt a city that became synonymous with the victorious Leave campaign after a landslide 2016 victory.

“There is something symbolic in big clubs from struggling northern areas going down,” as Anthony Clavane wrote in A Yorkshire Tragedy. Just another bad news day in a part of the country where Westminster might as well exist in a different realm. On the same day that the football club were relegated to League One, car manufacturer Nissan announced that it will cut hundreds of jobs at its Sunderland car plant.

In times of economic uncertainty and social unrest, a football club must looks after its own. In February 2017, Sunderland announced a round of redundancies amongst its lowest-paid staff after the club conducted an internal review. They were roundly criticised for announcing the job losses a week after David Moyes’ side had enjoyed a mid-season trip to New York in which they trained in gyms in the city and went for a cold run in Central Park.

In 1973, when Sunderland won the FA Cup, Bob Stokoe’s team was paraded through the streets of the city while adoring families adorned in red and white saluted their heroes. As a police officer in the area, my grandfather was part of that parade and spoke with Stokoe and the players. He would regularly recount stories of Sunderland’s proudest day, when a team littered with local-born men under a local-born manager became giantkillers.

Six of those players were born within 30 miles of Sunderland. They were proud of their own achievements, but proud too for the city and its people. Thirty-five years later, where are the connections between the club and the city?

A club that loses touch with its community loses control. Going to the game on a Saturday used to provide release for Sunderland supporters. Fans asked who they support now answer with an air of apology. All pride has been lost. Even dark comedy begins to lose its edge when the jokes are repeated so often.

The average attendance is down by 14,000 from last season to this, and will fall again next season. Soon more will stop going, not everyone and not in vast droves, because that is not how it works. But husbands will turn to wives, fathers and mothers to sons and daughters and friends to one another and they will all ask whether it is worth bothering anymore. Time is tight and money is tighter; there are better ways of spending both than showing unrequited love.

“I didn’t bring the magic,” Stokoe said on the eve of Sunderland’s FA Cup final win. “It’s always been here. I just came back to find it.”

Forty-five years and a day after that victory, Sunderland will play their final Championship match of the season against champions Wolves. Those who do attend the match will do so through habit or a grim determination to see this journey until its nadir. Stokoe’s optimism has been replaced by miserable reality: magic does not exist here anymore.