Home All The News F365 Says: Only one argument to support Pep’s protest 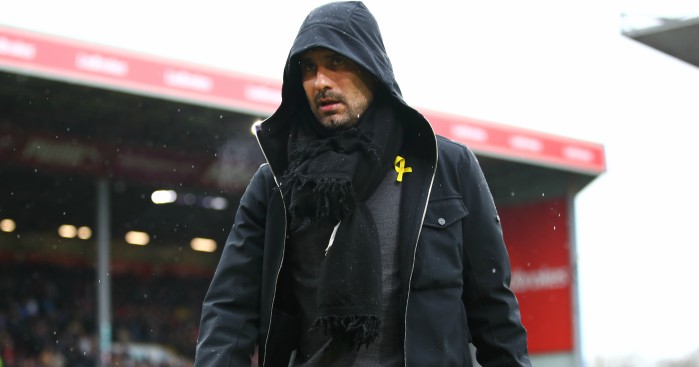 City are not the only Premier League side to leave themselves light on the bench this season, with Crystal Palace and West Ham doing similar in recent weeks. But neither David Moyes nor Roy Hodgson have the resources to hand that Guardiola enjoys and, regardless of his thinking, few can argue that it was a good look.

It’s not entirely clear what Guardiola’s point was. “We don’t have any more,” explained Guardiola, who is currently without seven first-team players and Lukas Nmecha, who was understood to be vying with the ghost of Riyad Mahrez to take the seventh place.

If it was a protest, his cause was not obvious. Perhaps it was to highlight his point that City – and players in general – are not receiving the protection they deserve from referees. David Silva, Leroy Sane and Phil Foden are all sidelined due to impact injuries caused by opponents, while Guardiola said this week that his side were lucky to avoid further injuries in the midweek win over West Brom.

Guardiola also pointed to the the fact that the Under-23s played on Friday night. Coach Simon Davies fielded an all-teenage side at the Academy Stadium where City’s youngsters fell to a last-minute defeat to Swansea. It is understood that Guardiola knew on Friday afternoon that he would be a man light and opted not to deprive one of the Elite Development Squad of game time just to sit on the bench at Burnley.

Neville argued against that viewpoint. “Even if they played yesterday, bring one and put them on the bench,” he said. “Bring a kid to travel with the team, help the kit man and put him on the bench to have the experience of being in a Premier League game. Give someone a boost at the club.”

Even in this modern era, when players’ workloads are monitored and analysed as precisely as anything else, surely any of those teenagers who faced Swansea last night would have jumped at the opportunity to travel the short distance to the City hotel and go through the matchday motions with the talent currently running away with the Premier League. If not, then such an attitude would probably suggest they are wasting their time at City anyway. But none appear to have been given that option.

If Guardiola wasn’t trying to make a petty point, then Neville’s would have been the simple solution. City handed out 67 different squad numbers in the summer and even with a dozen or so of those players away on loan, Guardiola could have found a body somewhere at the City Academy that would have relished the chance to be involved with the first-team.

But just maybe, that was part of Guardiola and his staff’s thinking. City have a huge stockpile of young players within the club, many who you’ve never heard of, who remain way off the level required in the Premier League, let alone at the very top of it. These youngsters live extremely privileged lifestyles while earning huge sums of money.

Guardiola could suggest that as inspiring as it might be for a young player to be involved with the first-team, it could be equally motivating for them not to be.

The City boss often dangles his carrot for his players but he has shown he is equally as adept with his stick. The message, if his young players interpret it as such, could be that this is the level of the first-team; if you want to make it, then these are the standards that must be achieved. In other words: “You won’t play for me by default.”

If that was Guardiola’s aim, it would do him no harm to state it. Without doing so, having spent £448million in a season and half – a figure that would have risen above half a billion if Leicester had wilted over Mahrez – the City boss will find sympathy or support in short supply.