Roy Hodgson was down to the bare bones but Palace were hugely impressive while emerging from their slump... 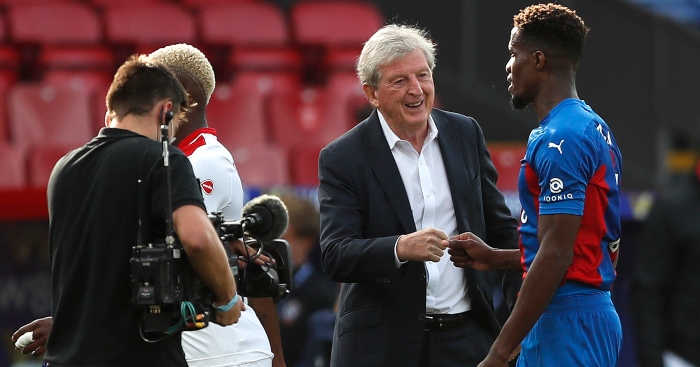 If this was the start of Roy Hodgson’s farewell tour of the Premier League with Crystal Palace, a victory over Southampton and the manner in which it was achieved should give the Eagles a huge shot in the arm for the remaining 37 dates of a packed schedule.

During almost the entirety of Hodgson’s 44-year managerial career, a home meeting with Saints would have been viewed as a one of the more desirable assignments for any top-flight side to commence a new campaign. Southampton’s opening day win ratio of 9.5 per cent is the worst of any team to have played 10 Premier League seasons, but few of those previous campaigns have begun amid such positivity on the south coast, where momentum was gathering for Ralph Hasenhuttl.

For Hodgson and Palace, their momentum has taken a vastly contrasting trajectory. They endured a truly wretched post-lockdown conclusion to last season, taking only one point from their last 24 while losing seven on the trot. Even before Covid, Saints have marched out of Selhurst Park with wins on their last three visits. The truncated break did not seem likely to give Hodgson and Palace long enough to clear their heads to go again and Southampton, with all their buoyant optimism, were possibly the side outside the top six they least wanted to see on the opening day.

A short summer certainly did not give Palace time to heal physically. On the opening day, Hodgson was down to the bare bones, which makes this triumph over the spritely Saints all the more impressive.

Only two of Palace’s 10 outfield starters were the first choice for the position they occupied. James McArthur started in central midfield and Wilfried Zaha played in a front two alongside Jordan Ayew, who will likely play a more prominent role this term on the right flank amid Hodgson’s reversion to a 4-4-2. The back four featured plenty of experience but each of Joel Ward, Scott Dann and Tyrick Mitchell are all set to serve as back-up this season though Cheikhou Kouyate, man of the match in nullifying England’s Danny Ings and Che Adams, would be entitled to feel aggrieved if he is made to make way for Mamadou Sakho any time soon.

Hodgson emphasised the patchwork nature of his XI by omitting the two new recruits available to him, though Eberechi Eze demonstrated enough in a 15-minute cameo off the bench to justify the excitement around Palace’s big summer signing and Hodgson’s biggest ever purchase. Eze will likely play a big role in his maiden top-flight season coming off the left flank where he and Zaha will have a huge say in improving Palace’s goalscoring record, which was worse than ever last term.

Zaha has certainly upped his game in that respect over recent weeks and just as encouraging as four goals in five matches over pre-season and today is the Palace star’s apparent appetite for the new campaign. Whether that will be spent at Palace under Hodgson, we will see in the coming weeks and Eagles’ supporters perhaps rightly fear that the graft and drive demonstrated while sinking the Saints were prompted by the desire to stand out in the shop window. But, whatever his motivation, this was more like the old Zaha rather than the one who seemed to sulk his way through most of last season.

Zaha may prefer to envisage his future in more glamourous surroundings, and many of the players who out-fought and out-thought Saints are unlikely to outlast Hodgson beyond the end of this season. Thirteen of Palace’s ageing first-team squad are in the final year of their contracts and their approach to recruitment this summer emphasises a shift to younger, up-and-coming talent. But in this victory, Palace’s first in seven home openers, Hodgson and the Eagles’ oldies proved they aren’t ready to be written off just yet.