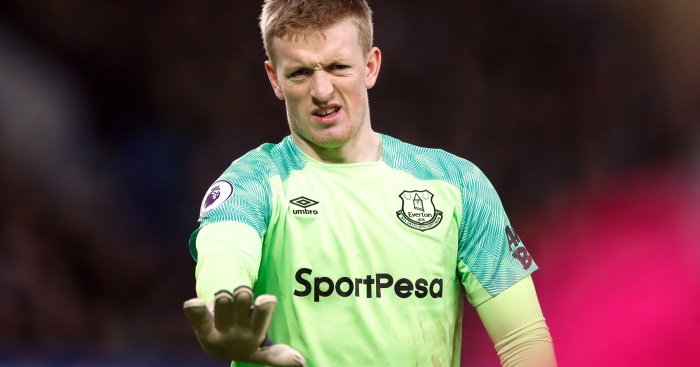 It was a silent disco as opposed to getting the rave on for Jordan Pickford’s 100th Premier League appearance, but the serene approach evidently suits the Everton goalkeeper.

Compared to the chaos of his pantomine villain performance at Newcastle last weekend, after which Marco Silva called for a better “emotional balance” from his stopper, Pickford was a picture of calm in the Toffees goal even while riding the Chelsea storm in the first half at Goodison Park. When all eyes were on the keeper, offering the kind of attention he appeared to crave too much at St James’ Park, Pickford was faultless.

Crucially, he was mostly anonymous. When he caught the eye, it was to deny Eden Hazard, Jorginho, Ross Barkley, Callum Hudson-Odoi and on two occasions, Gonzalo Higuain. Those saves, especially from the Argentina striker, will help cement his status as England No.1 when he heads off to join up with Gareth Southgate’s squad tomorrow.

So infuriating was he last week that some had called for Southgate to reconsider that stance. Back in the north east, Pickford was the closest supporters at St James’ Park have come to a Mackem this season, and the former Sunderland keeper was far too willing to engage in a running battle with the Toon Army.

The secret to Jordan Pickford’s kicking:

It was a distraction neither he nor Everton needed. Though he saved a penalty from Matt Ritchie, it was he who gave it away after fumbling a routine cross. Even after conceding two late goals to allow Newcastle one of their most satisfying wins of the season, Pickford refused to shuffle off quietly.

It’s an approach that rubs many up the wrong way, not only those of the black and white persuasion. From the point of view of many managers and defenders, penalty boxes should be an oasis of calm. Too often, in Everton’s and England’s, Pickford is having a party and everyone’s invited.

Perhaps Pickford is a product of his upbringing. The former Sunderland stopper has played at every tier of English football down to level five. As an 18-year-old, he was grafting at the bottom of the Conference Premier with Darlington and Alfreton Town. A teenage goalkeeper is unlikely to have survived those experiences without an abundance of confidence and exuberance to mask his youth and greenness.

In terms of presence, he certainly is more Schmeichel than Seaman, and Peter’s son Kasper is a similar personality having come through the lower leagues himself. Perhaps David de Gea can afford to be more chilled out because he never had to go to Barrow and Tamworth on a Tuesday night in his formative years.

Whatever the reason for Pickford’s persona, it doesn’t have to be viewed as a weakness. And for all the talk of his poor form, today’s clean sheet was a third in four games, one of which came in the derby stalemate with Liverpool, who traipsed off back across Stanley Park without two precious points thanks in no small part to Pickford’s save from Mo Salah.

He certainly owed Silva a performance in the battle of Merseyside after his almighty misjudgement at the end of the previous one, but all goalkeepers, especially one who did not turn 25 until ten days ago, will make mistakes and there is never a good moment for one, even if the 94th minute of a derby is perhaps the worst time imaginable.

One of the keys to goalkeeping is restricting mistakes to an absolute minimum. Keeping the noise down will certainly help Pickford with that.