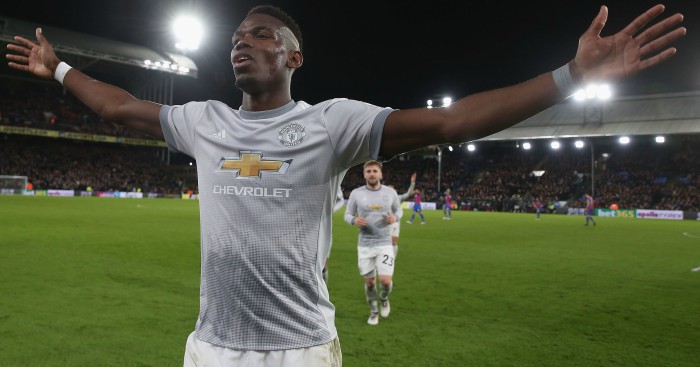 An injury-time winner to cap a come-from-behind 3-2 victory away at Crystal Palace may well deflect some of the criticism that was heading Manchester United’s way. But Jose Mourinho won’t be so blinded by Nemanja Matic’s stunning late strike that he will have forgotten just how wretched his team were for long periods at Selhurst Park. And squarely in the firing line will stand his two biggest stars.

Alexis Sanchez, in his eighth appearance for United, toiled after reverting to his preferred role on the left after a dalliance with the right flank during last week’s win over Chelsea. The Chilean frustrated, but at least he gave the impression of recognising his ineffectiveness. Paul Pogba, on the other hand, continued to bait Mourinho with a performance that eroded further the theory that the manager is most to blame for his record signing’s struggles.

Mourinho and everyone else is still waiting for Pogba to prove a point after being dropped at Sevilla less than a fortnight ago. But his performance, especially in the opening hour at Selhurst Park, suggests he believes it was already made during last week’s win over Chelsea. Against a Palace side scrapping for their lives, he reverted to the meandering, careless, ill-disciplined liability that Mourinho finally lost patience with last month.

The midfielder set the tone for his first half by spending the first few moments of play dressing himself. Despite having more than enough time before kick-off, Pogba was too busy putting his gloves on to defend a Palace throw-in in United’s defensive third.

Shortly after, in exactly the same area with fingers presumably now toasty warm, Pogba attempted to return Ashley Young’s throw by letting the ball bounce off his thigh. It never got close to reaching its target and Pogba had to chase and slide in to concede a corner. From that set-piece, he failed to get close enough to James Tomkins to deny the Palace centre-half a volley at goal from the centre of the box. It was a shambolic start and it got worse.

Palace’s opener when it came in the 11th minute again highlighted the infuriating facets of Pogba’s game. The £89million man attempted a 70-yard Hail Mary pass from deep that was never a viable option. After launching the ball upfield as the deepest of United’s outfield players and giving possession back to Palace, Pogba trotted forward, apparently oblivious to the Eagles attack now gaining momentum. Six team-mates passed the midfielder as they retreated but the record signing failed, or refused, to react. Still there was time to make a contribution as Christian Benteke moved along the defensive line but Pogba remained uninterested while Andros Townsend lashed in a deflected opening goal.

Pogba never made it out of first gear during a first half but he was certainly not the lone culprit in the United XI. Indeed, between them, the left-sided trio of Pogba, Sanchez and Young conspired to give possession away 44 times in 45 minutes.

But, just as he craves, there is a greater focus on Pogba. With that profile comes expectation. The opening 45 minutes gave plenty more weight to the theory that Pogba believes he can have one without the other.

Pogba’s poor form has led to more fingers being pointed at Mourinho than the player himself, but the point has long since passed for the France star to take some personal responsibility.

He was supposedly stifled alongside Matic at the base of Mourinho’s midfield, with a deeper role not granting Pogba the freedom he apparently needs to express himself. After the Tottenham and Newcastle defeats, Mourinho moved to a 4-3-3, with Pogba on the left of Matic, and Scott McTominay providing yet more cover.

This is apparently Pogba’s best position and Mourinho has created a midfield that should offer him the platform to perform. Not only is he failing to have an impact going forward but he remains, as Jamie Carragher put it, ‘a liability’ defensively.

Mourinho has expectations of even the most creative talents when United don’t have the ball. Even if Pogba was performing miracles in attack, his half-hearted efforts when the ball is not at his feet are unlikely to be tolerated and the manager was absolutely right to sit the former Juventus star on his backside at Sevilla.

Perhaps the impression of apathy is gleaned from his long-legged style, but Pogba possesses the physical attributes to effect United’s defensive approach in a far more positive manner. Mourinho certainly expects a contribution at either end, given Matic is largely kept on a leash in front of the centre-halves.

“Now people say a box to box has to play free of defensive duties. That is not box to box – that is a box in the box and stay in that box!”

That message has presumably been relayed in no uncertain terms to Pogba. After the Palace trip, it needs reinforcing ahead of a spell that will make or break United’s season.