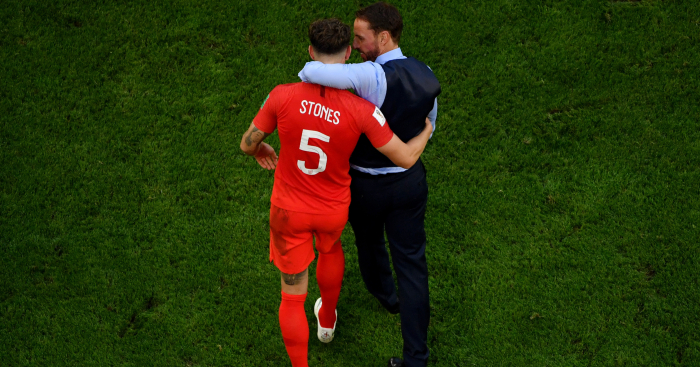 It is barely a year since Gareth Southgate gathered his England players together and informed them that they should not expect to keep their international place if they were not getting regular football for their clubs.

Some of the biggest characters in his squad suffered as a consequence – Joe Hart and Wayne Rooney have been ruthlessly culled, while Gary Cahill was made to sweat for his squad place. The change in policy from previous regimes also served as a warning to the likes of Alex Oxlade-Chamberlain, Ruben Loftus-Cheek and Nathaniel Chalobah while they were pondering their Premier League prospects.

For John Stones, Southgate has been prepared to make an exception and, in Russia, the Manchester City centre-half has illustrated exactly why.

Harry Maguire has absorbed much of the limelight as the breakthrough star of this emerging team and it helps that the huge defender is a particularly easy character to like, even among a largely likeable crew. But, unlike some England defenders of recent years, Stones seems entirely content sat in the shadow cast by Maguire’s enormous head, on and off the field.

Despite being Maguire’s junior by a year, Stones is considerably further down the road. Where the weight of expectation is a new burden for Maguire to carry, 24-year-old Stones has been hauling it around for the past couple of years since he moved to Manchester City from Everton for £47.5million.

The inevitable consequence of such a price is that the scrutiny has been intense on a player who is still in the development phase of his career. Five years before making his Premier League debut, Stones was having to play down a year at 14 and 15 because he couldn’t get a game in his own age group. Less than three years later, he was in Barnsley’s first team in the Championship. A year on, he was starting for Southgate in his England Under-21s, then came the move to Everton before City made him the second-most expensive defender in history.

The increase in expectation has been as steep as his learning curve. Of course there have been dips. During his first season at City, only Bournemouth’s Simon Francis made the same number of errors that led to goals and only in January he was described as ‘still looking like an accident waiting to happen’ after a run of three mistakes in three matches upon his return from injury.

In between those tests, Stones started his sophomore season at City extremely impressively before his hamstring gave way. The run of 18 matches in all competitions offered further proof of his talent sandwiched by damning evidence of his inconsistency. Those errors at the start of 2017 coincided with City buying another centre-half for even more money, with Aymeric Laporte taking the number of top-class centre-halves at City to four.

Form and further fitness problems restricted Stones to just 419 Premier League minutes in 2018. When you consider that the defender has amassed 16 minutes more playing time in three weeks at the World Cup finals, Southgate’s handling of Stones has to be perceived as special treatment.

But the England boss obviously had a plan for Stones. Last November – two days before the defender’s season was interrupted by injury at Leicester – Southgate told the world that England would be playing with a three-man defence. Stones has started all nine international matches since, while the England coach has picked the City defender in his XI in all but four of his 23 matches in charge.

That consistency of selection presumably told Stones all he needed to know about Southgate’s faith in him, especially during the spells when form was eluding him. Even prior to the World Cup, the centre-half has performed in an England shirt with the composure and calmness of a player who knows his manager trusts him.

In contrast to Southgate, whose actions speak louder than his words, Guardiola had to do the talking. When his selection choices were used as evidence to suggest he did not rate Stones, the City boss always relished the opportunities he was given to fight his player’s corner.

“I don’t know how long I will be here in Manchester, but as long as I’m here, John Stones will be with us,” said Guardiola amid a run of eight matches without the defender in his side towards the end of the season. “He is a f*cking amazing guy and he’s going to stay here with me. He is a joy to train, I want to help him.”

That came a year after an equally staunch defence of his defender. “John Stones has more personality than anyone in this room – more balls than everyone here,” Guardiola told a press conference towards the end of his first season. “With all his huge amount of mistakes, I love him. It is not easy to play central defence for this manager but I admire my central defenders.”

Stones’ performances in Russia have vindicated both of his managers. So far, the central pivot of Southgate’s three-man defence has been almost flawless in responding to a range of different challenges.

The group stage shone the spotlight on the one side of Stones’ game that made him stand out above his peers soon after his arriving in the Premier League – his quality on the ball. Stones won’t simply knock it square or back, or allow a midfielder to a take it off his toe. He would not have got this far with Guardiola without the “balls” to take responsibility and risks.

Then came a sterner test of the defender’s credentials – Colombia. Or, as Stones called them, “the dirtiest team I’ve ever come up against”. He was imperious in shackling  Fadamel Falcao, making 10 clearances – seven more than any team-mate – while displaying the defensive instincts that so many doubted he had.

World Cup winner Lothar Matthaus was impressed: “I said to my neighbour, ‘This Stones is one of the best central defenders in the world’.” Gary Neville too: “I’ve loved Pickford, loved Maguire, loved Trippier, loved Kane. But John Stones, for me, absolutely epitomises the control and composure of this team.”

That is absolutely what Stones has demonstrated and why this three-man defence so carefully crafted by Southgate has provided the foundation for England’s run to the semi-finals. It may be a crude summation to say Kyle Walker brings the pace and Maguire offers the aggression – the two traits traditionally required of any defensive unit – but Stones has provided the unique qualities that have made England’s rearguard stand out: a reassuring calm as the second-to-last line of defence and a drive in possession from deep that has helped Southgate’s men retain the ball more intelligently than any other England team for many a year.

These are the performances that we all hoped Stones could produce, even if many started to doubt whether he could fulfil that potential. As a late developer on the fast track, he deserved the time, faith and backing Guardiola and Southgate have afforded him. The rest of us need to remember what we have witnessed this summer because there will inevitably be more dips before he achieves the consistency of the world-class centre-back he is almost certain to become.