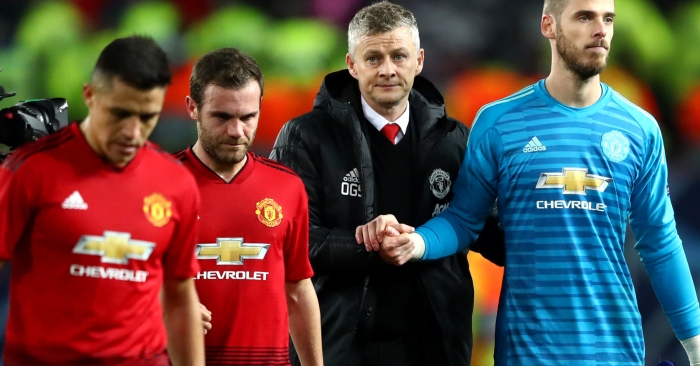 Having soared in recent weeks to what appeared to be a five-and-a-half-year high, Manchester United’s stock was due a correction. But after Paris Saint-Germain had made patsies of Ole Gunnar Solskjaer’s men, it felt like more of a crash at Old Trafford.

The Champions League last 16 first-leg meeting turned out to be everything United fans feared when the draw was made back in the dark days of December. That was before Jose Mourinho’s snark gave way to Solskjaer’s smile, and though the caretaker boss has worked wonders in wringing as much out of his players as possible, Thomas Tuchel’s side demonstrated that Man Utd cannot live on positive vibes alone.

Of course, the tie is not over – but realistically, it is. Solskjaer will take his side to Paris in three weeks in an attempt to overturn a two-goal deficit certainly without Paul Pogba and perhaps without two of his other brightest attacking prospects, Anthony Martial and Jesse Lingard.

Martial and Lingard had to be replaced halfway through what had been a cagey affair between two sides seemingly wary of making a mistake. United have had only one Champions League first leg tie at home in the last 10 years, while PSG have been badly exposed at this same stage in the two previous seasons when they had ambitions of going all the way.

When positivity was required, surprisingly, it was Solskjaer’s side who were caught out. PSG seemed to take the introduction of Juan Mata and Alexis Sanchez as their cue to up the tempo and when they did, United had no response, either in halting the visitors’ charge or offering any kind of counter. Fittingly given the identity of their second scorer, once Kylian Mbappe had doubled the advantage, PSG were off into the distance and United were left choking on dust.

1 – Manchester United managed just one shot on target against PSG tonight, their lowest in a Champions League match at Old Trafford since February 2005 in the Last 16 against eventual finalists Milan (also 1). Lacklustre. #MUNPSG pic.twitter.com/yJZUrLHAoD

In that decisive period after the break, the Parisians showed exactly the type of quality Tuchel was crying out for – literally – during a scrappy first half littered with errors and breaks in play. Marco Verratti and Marquinos were everywhere, denying United any rhythm to build up a head of steam, and after the break, they built the platform upon which Angel Di Maria and Mbappe ruthlessly put United to the sword.

It had to be Di Maria. The ex-United record signing was booed all night, with the home fans’ only highlight coming when their former No.7 was sent hurtling towards the South Stand by Ashley Young’s nudge. He may be a ‘complete fanny’ but, uncharacteristically – if his year at Old Trafford is any measure – Di Maria dusted himself down and seemed hell-bent on making his point, which he did. Twice. First with a devilish corner that dissected Nemanja Matic and David de Gea at the far post, seven minutes before he teed up Mbappe for the second on the hour.

It seemed to matter not one jot that PSG were without Neymar and Edinson Cavani. Pogba thought United were ‘lucky’ to avoid facing Neymar but that was only the first thing the France star got wrong around this tie. PSG are a far more solid unit without Neymar flouting his duties, with Tuchel’s side conceding a goal a game in the Brazilian’s presence this term but only four in 12 matches without him. That extra robustness came in handy, with PSG keeping their first clean sheet in the Champions League for 11 games – a run that goes back to October 2017.

Pogba’s prediction was off, and so was his approach. The United midfielder had been one of Solskjaer’s brightest stars during the 11 previous games of the caretaker boss’s reign but, against his hometown team, Pogba was nullified. Partly by Marquinhos, Verratti and Dani Alves, but also by his own over-heightened sense of arousal. Mourinho felt Pogba was too laid back but the opposite appeared true tonight. Already on a needless booking and having narrowly swerved a second soon after for a lunge on Dani Alves, Pogba eventually saw red when he couldn’t resist leaving a mark on the Brazil veteran, shortly after the PSG flier had done the same to him.

Pogba’s recklessness leaves Solskjaer without his most creative influence for a second leg after which – if the scoreline is overturned – the caretaker should not only be given the permanent job immediately, but should probably be granted a statue too. Martial and Lingard’s absence will be as keenly felt. The first half showed that United’s physical qualities could counter PSG’s quality, but a deficit in both aspects makes for a tough night in Paris.