Home F365 Says F365 Says: Puel was a bad fit for Leicester from the start 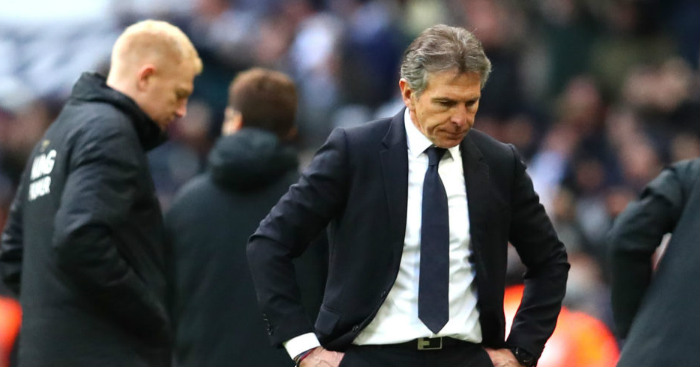 Decades after the publication of his brilliant classic novel Catch-22, Joseph Heller would occasionally be asked why he had never written anything as good, to which he would reply: “Who has?”

Leicester City fans must feel the same way. What do you do when you know you have already achieved the greatest thing you ever possibly could and know you have no chance of repeating it?

The big lie of narrative fiction is that there is a happily ever after: Prince Charming still has to pay the bills, Beauty will get sick of the Beast leaving hair in the shower drain, the Seven Dwarves’ house will still have crappy plumbing. Life always goes on, and – as Heller captured better than anyone – it always returns to being prosaic and mundane.

But that doesn’t mean you should just settle for a life of directionless boredom. You can’t just return to the sedate quiet of the Shire after conquering Mount Doom; you need some other project to strive towards and keep yourself entertained, even if it is comparatively minor. And that is why Claude Puel has found himself out of a job.

Puel was never a particularly popular figure with the Leicester fans. Despite taking Southampton to eighth and a cup final in his one and only season on the south coast, that spell earned the Frenchman a reputation for being overly cautious: the Saints had scored just 41 goals, less than any side outside the bottom five and two fewer than Tony Pulis’ West Brom.

Leicester fans were fearful that Puel would bring that languorous style with him, and he did nothing to dispel those worries during his 16 months at the club. Even when things are going well, supporters will only put up with that for so long these days: ask Pulis, or Sam Allardyce, or Jose Mourinho, or David Moyes. If there has been one big shift in the way we assess managers over the past decade, then that is it, for all of those men – bar Mourinho – enjoyed lengthy tenures in the previous decade. All of them can also confirm that when their results become as desiccated as their tactics, they are left without a leg to stand on.

The fact that it was Leicester only exacerbated that for Puel. In case it needs repeating, they won the Premier League in 2016. Leicester. The f**king Premier League. After that kind of high, the comedown is always going to be difficult, but to go from that to Puel in the space of 18 months must have seemed brutal. As Ryan Baldi wrote last month: “Leicester fans aren’t looking for a repeat of that once-in-a-lifetime title win…this isn’t a case of supporters wrangling over results.”

No: aside from those irritating people who will always find something to complain about, fans generally understand that the Champions League places are more-or-less monopolised. But they still crave the sense that their club is moving in the right direction, and playing attacking football is a huge part of that. It is much more bearable to go away on a Saturday afternoon thinking ‘if only we could sort out that defence’ than ‘where on earth are we going to get goals from?’

Things were not quite that dire at Leicester – they have scored just three goals fewer than the much-acclaimed Wolves this season – but nor was there any indication that things were going to get better; in which case, what’s the point?

Leicester fans have already seen their side achieve the impossible, and they know that even once in a lifetime is one more than they could ever have dared to dream. They don’t demand much: just a bit of excitement once or twice a week. That shouldn’t be so much to ask, should it?