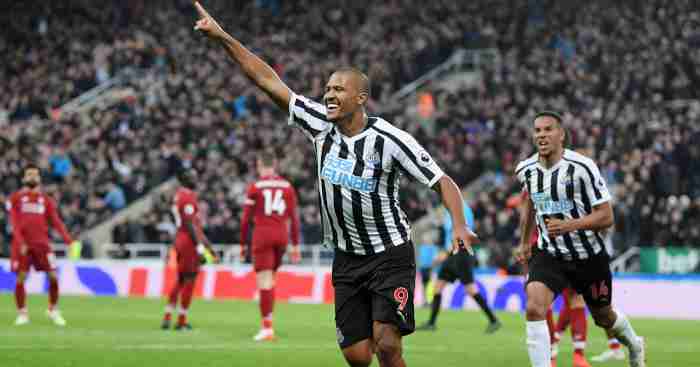 More than 200 journalists, photographers and television crews from across the world arrived at St James’ Park on Saturday, eagerly anticipating whether the narrative of the day – Rafael Benitez – would prove decisive. The former Liverpool boss stood in the way of his former club taking the Premier League title race to a final day showdown with Manchester City. And they did just that in dramatic circumstances: Divock Origi came off the bench to clinch a 3-2 win late on.

But of much greater importance to Benitez was ending the season in front of a 52,000-strong crowd on a high with Newcastle United.

Supporters have never hidden their love for Benitez, and with his contract expiring next month, they will be hoping this wasn’t his final home game in charge. It was their aim, for potentially 90 final minutes, to make their feelings known; a chorus of “Rafa Benitez, we want you to stay” was prominent throughout, while a huge flag celebrating the club and area he has awoken was unveiled at the Gallowgate End before kick-off.

The Spaniard has been fielding questions over his future for quite some time now, and gave the most upbeat response yet in his pre-match press conference. Talks with the hierarchy had been positive. His stance is clear and hasn’t changed; he doesn’t want the moon on a stick, rather just a coherent plan to push on and leave relegation battles in the past.

But his is not the only future that needs resolving. Isaac Hayden and Salomon Rondon could both leave in the summer, for vastly different reasons.

Both players showed exactly why that is an outcome Newcastle must avoid on Saturday. Hayden helped organise the team through midfield and Rondon scored the second-half equaliser that was just reward for having led the line fantastically. He has done so all season, and while his loan deal with West Brom comes to an end soon, with no permanent deal in place, Hayden has made no secret of the fact he wants to leave for family reasons.

This season has been almost identical to last. Great form in the New Year staved off the drop, which looked more than likely early on. The shackles and the pressure was off coming into the game, and the rousing atmosphere geared to entice Benitez spurred the Magpies on. They carried a threat throughout. Much of the performance, which for long periods looked like catching Liverpool out, was started by Hayden and led by Rondon.

Benitez doesn’t always play his flashiest players – Jonjo Shelvey being an unused substitute is proof of that – instead turning to those he trusts most. Not only has Rondon worked harder than most Newcastle players this season, often giving them a foothold in games from an isolated position up front, but he has now scored 10 league goals and added seven assists. Newcastle play through him, and that level of reliance is too high to lose – especially when he is available for £16.5m if West Brom stay down, or just over £20m if they earn promotion. There aren’t many proven strikers offering better value in the current market.

Virgil van Dijk may have impacted the game in two decisive ways, the opening goal and by appearing to order Xherdan Shaqiri to take the free-kick which led to Origi’s winner, but he hasn’t had many tougher games for Liverpool. Rondon constantly made him feel uneasy in the air and didn’t give him a moment of peace.

Salomón Rondón has now been directly involved in 17 Premier League goals this season, at least four more than any other #NUFC player.

A man on a mission tonight. pic.twitter.com/Pad9Zyt6sZ

Signing the Venezuelan would go a long way to appeasing Benitez in his negotiations, too. Most clubs would likely have sealed a permanent deal by now, but Newcastle are not most clubs. Mike Ashley has never hidden his desire to make it policy to sign players with “resale” value, something that, with his 30th birthday approaching, Rondon doesn’t have. Benitez insists, rightly, that his squad needs a blend of youth and experience to compete higher up the Premier League, and this is a deal that can be done quickly, with minimal fuss and, despite what the board may think, risk.

Obviously, with Hayden, the situation is completely different. A young player signed for very little three years ago, the former Arsenal midfielder is a prime example of what this regime looks for in a transfer. While Newcastle are under no obligation to sell, there is a degree of sympathy from the club and fans over his personal situation, especially since he became such a crucial player and a huge reason for their superb end to the campaign.

Pep Guardiola suggested Manchester City’s defeat at St James’ Park in January, their only one in 2019, stemmed from a failure to control Hayden and his partner, the currently injured Sean Longstaff, and had his side not snatched victory, it would be a safe bet to suggest Jurgen Klopp would have said something similar. Just five months on from a red card at Cardiff, which appeared to signal the end for him on Tyneside, that night saw him complete a turnaround which, in an ideal world, means he won’t be sold. Newcastle will hope they can find a solution to his troubles, because otherwise it means allowing someone Benitez believes can play for England to leave.

It is no surprise that Benitez’s future is grabbing most headlines, because it is of paramount importance that he signs a new contract, both for the club’s progression and maintaining some sort of status quo between fans and boardroom. Ashley will never win over the supporters, but if Benitez agrees to stay and oversee the next stage, the threat of a civil war will disperse. If he doesn’t, and instead decides to wait for a better offer, it would be the clearest sign yet that the club is interested in little more than profit, turning its back on the prosperous future Benitez has offered them at a reasonable price. He has given fans their hope back, the community their club back, and shown exactly what he can achieve if supplied with the correct ammunition.

Though keeping Rondon and Hayden cannot be given the same priority, they too have a huge role to play in that future, and having to replace them would put everyone on the back foot this summer