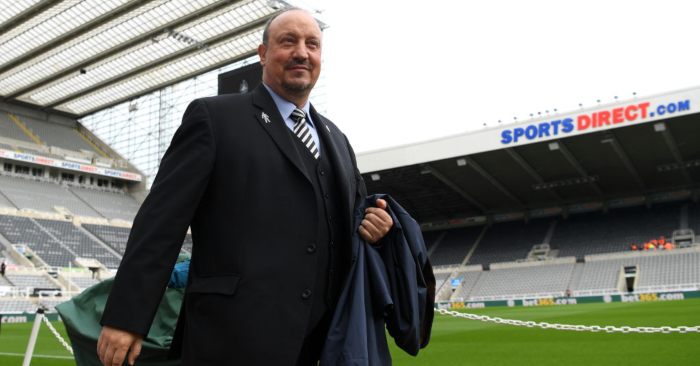 There were many days which defined Rafa Benitez’s final season at Newcastle, but January 12 was probably the most descriptive. That was the Saturday when they went to Stamford Bridge and played ever so well, but still lost to two outstanding Chelsea goals conjured from nowhere. It’s a game which endures because it captured the Newcastle dilemma so vividly.

It was a terrific performance. Rafael Benitez had travelled south with the intention of congesting the game, setting up a back five to cast a net around Eden Hazard, Pedro and Willian. It worked. As did the counter-attack, because Benitez’s side played with great balance that evening, resisting Chelsea for long periods, but then springing forward in numbers and into positions which, with a little more composure, might have won them the game.

It was striking because it was so unexpected. Chelsea had their issues, of course – the Maurizio Sarri saga would endure all season – but Benitez ran them close with little more than a Championship side; one which had a few pockets of Premier League ability but which, in the main, had a distinctly Football League flavour. Ultimately it was class that told, Eden Hazard carrying his teammates on his back once again, but Newcastle’s ability to compete in spite of their deficits was great testament to their coach.

But the relevance of that game existed in its peripheral layers too. Mike Ashley was there and, while the home fans sat largely in entitled silence, the visiting supporters barracked their owner loudly and at regular intervals. There may have been nothing unusual in that, it’s been a feature of every Newcastle game for over a decade, but the standard of the performance on the pitch despite the obvious limitations made it all seem very righteous. In fact, the better the team played, the more visceral the abuse seemed to get.

Nearly six months later, Benitez is packed and ready to go. The club announced on Monday that they had failed to reach an agreement to extend the Spaniard’s contract and that he would be leaving his job before the end of June. This is about control rather than money. Benitez wanted assurances over the extent of his influence and, evidently, Ashley was unwilling to provide them. According to The Guardian’s Louise Taylor, the biggest distance between the two concerns the club’s recruiting policy: Benitez wants to shop in something other than the cheap, young and cheerful parts of the market, but Ashley is unwilling to deviate from his speculate-and-sell model.

It’s impossible to respond to this latest development without cycling back to that game back in January. The obvious conclusion is that, with more investment to multiply the Benitez effect, Newcastle would be in a very healthy position. If he were, for instance, to be granted a few more Salomon Rondons then, yes, this could be a team worth emotionally investing in. A few weeks later, Manchester City were upended at St James’ Park and that made that point in an even more comprehensive way; Benitez and Newcastle worked well in a way which transcended the prohibitive atmosphere.

And why doesn’t Ashley want that? He has his own aims, of course, and while those still aren’t entirely clear, it can be assumed that they all relate in some way to his various business interests. What has always been baffling, though, is his inability to see how a healthy Newcastle United could better serve his aims. How, without the various stigmas he has created, the club as an entity could be more profitable and, ultimately, more valuable.

That imperative defines almost every owner-club relationship at the top of the game. In some cases, it’s well-disguised and supporters receive a better deal as a result, but there are no benefactors anymore, no businessmen who own and fund clubs purely for the sake of their own vanity and reputation. Firstly because football is now much too costly to justify such a simple aim and secondly, unfortunately, because there’s so much more to achieve. Now, there is always an additional aim. Whether it be the accumulation of soft power, the employment of football as a public relations mechanism or, at its most simple, the use of the sport as a marketing tool.

Superficially, Ashley appears to understand that better than most. Sadly, it’s not possible to think of St James’ Park without picturing those SportsDirect hoardings, which have spread, melanoma like, around the ground. Cynically, that would suggest effective marketing. But whatever gains have been made by SportsDirect aside, Ashley’s Newcastle are actually a case study into how to resist the Premier League’s unquantifiable advantages. Between 2005 and 2016, when the competition’s brand visibility grew exponentially, the club’s commercial revenue actually retracted from £27.6m annually to £25.1m. In May 2019, The Guardian’s David Conn reported that, as of the latest financial results, that figure had still only reached £28m.

It’s a figure which tenuously describes how tainted by association Newcastle have become. The club may not have the geographical advantages of the London clubs or the international appeal of Manchester United, Liverpool and Manchester City. They have also suffered two relegations in the recent past and have no expectation of playing European football. Those are important caveats. However, the lack of growth is a measure of not just their footballing inertia, but also Ashley’s unwillingness to find a balance between his own interests and the team’s progress. Or, to be more frank, his failure to understand that there potentially exists an equilibrium between the two and that, actually, Benitez was his ticket towards that kind of symbiosis.

The emotional cost of Ashley’s ownership may be felt by Newcastle supporters alone. However, it’s the frustration of that myopia which can be felt nationwide. The club, as an entity, has some fantastic advantages. They are comfortably the best-positioned side within their region, their loyal public and large stadium makes them a very desirable property, and their nest of intangibles and associations adds further value. It’s theory, of course, but the naked emphasis on cost-cutting and the continuing association with cheap brands – betting companies, pay-day loan providers, budget sportswear – seems to have depressed their appeal into non-existence.

Worse still, the conversations which the football team provokes (as a result of the politics behind its construction) means that Newcastle are unable to exist with any independence from their owner. To go to St James’ Park is to think of Ashley. To watch one of their games on television is to picture the inside of a Sports Direct store and, unfortunately, even witnessing their good performances – like at Stamford Bridge – is to consider what they might be if these inhibiting factors didn’t exist.

Benitez was not a cure for those issues, but he was certainly a redirection away from them. He’s a political animal, a very agile mover, but he’s also a very fine coach and someone towards whom the club’s fanbase gravitated very quickly. As a result, while his time at the club didn’t detoxify Newcastle or put Ashley out of mind, they moved higher in public estimation than they had been under Steve McClaren, John Carver or Alan Pardew. Finally, there was some gravitas within the football department, something which made all of those ugly imperatives in the boardroom slightly less relevant.

And that’s the trick in modern football. As a contemporary fan, there’s always a need to look away. It’s a game of pretence, essentially, in which supporters have to convince themselves that their owners are invested in the same way that they are. Roman Abramovich didn’t see Chelsea as a strategic asset, he loves the club. The Abu Dhabi Group aren’t trying to alter the world’s perception of their country, they just want to build the finest football team the world has ever seen. The lies we tell ourselves are preposterous, but they’re necessary and the suspension of belief depends on getting something real in return.

In Mike Ashley’s case that may not ever have been possible. He is so antagonistic and has been so disrespectful of the native culture that, most likely, only a sale could ever change the perception of what Newcastle are. But Benitez presented him with the perfect opportunity to distance himself in an advantageous way and, from details reported, that wouldn’t have taken very much to achieve. Certainly not hundreds of millions of pounds every window, just the reinvestment of a healthy percentage of the television revenue and the occasional transfer deference to performance over profit. That team wouldn’t have been a contender, but it might have changed the conversation.

Which is the real aim, because that’s where the real value in football club ownership is: appearing to do one thing, but actually doing another. But that’s what separates Ashley from those who have been able to convert football’s power into currency. He remains so enslaved to his high street, quick quid mentality that the game’s macro opportunities are lost on him. Benitez was such a chance and, consumed by illusory virtues like control and sell-on fees, Ashley has cut his nose off to spite his face.