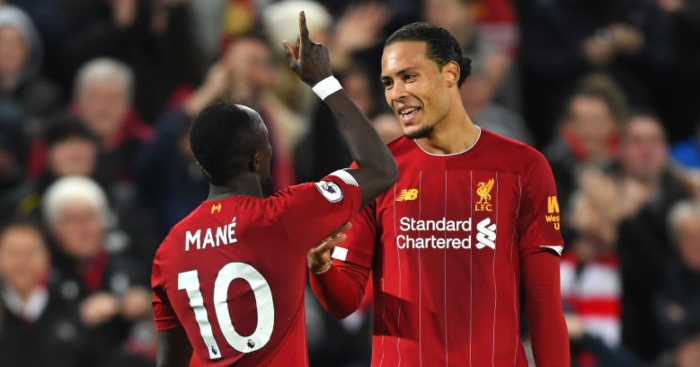 According to a recent poll, Sadio Mane is the fourth-best footballer in the world. Only his team-mate Virgil van Dijk, plus Cristiano Ronaldo and Lionel Messi are better than him according to the vote organised by the imaginatively titled French football magazine, France Football.

The existence of individual awards in a team sport is controversial in itself, and further questions are raised when the votes are totted up and the list of players ordered by good to less good emerges.

Despite their flaws, it’s difficult not to think about individual player rankings when witnessing a performance such as Mane’s in the Merseyside derby. After the game, the words “how good was Mane” almost become a statement rather than a question, but it’s worth asking that question anyway.

For several years the heir to the throne occupied by Messi and occasionally by Ronaldo was thought to be Neymar. Then it was Kylian Mbappe and, given his age, it will absolutely be the Frenchman’s at some point, but with three players in the top five following Ballon d’Or voting, the next star at the top of world football’s various player rankings could well play for Jurgen Klopp’s side.

Mohamed Salah used to be the star of this team with Mane hot on his heels and Roberto Firmino the linchpin linking everything together, but this season the 27-year-old Senegalese has proved he is the most consistently outstanding performer in this much-lauded front three.

And by rights, Mane should be running on empty by now. He played in the World Cup in 2018, 50 games in the 2018/19 season with Liverpool which didn’t finish until June’s Champions League final, an African Cup of Nations in which his side reached the final, then straight into the 2019/20 new season in which he will be approaching 2000 minutes by the end of the year.

But it wasn’t Mane who was rested for what Jurgen Klopp described after the event as a “really intense game, so we needed fresh legs”.

As Salah and Firmino sat on the bench, they watched their team-mate do what they do, and more. To set the scene for his first trick, Mane carried the ball from Liverpool’s half into opposition territory. Given the defenders in front of him, the pass he subsequently made could only be executed with his left foot. Even naturally left-footed players, making the pass from a dead ball situation, would have struggled to play it with such accuracy. The right-footed Mane made it on the run.

For Jordan Pickford, this pass was too perfect. It flirted with the Everton goalkeeper, who fell for its charms. His eyes lit up as he sensed the opportunity to come out and collect before turning his mind to launching an attack for his team with one of those trademark kicks from hands.

Instead, he was left stranded as the ball slowed down for its intended recipient, Divock Origi, who toed the ball around the keeper before finishing into an empty net beside the Everton fans. Pickford’s stream was still buffering while Mane and Origi were off celebrating.

The very best players are able to repeat a variety of excellent actions over and over again, and this is what Mane went on to do here.

Having received an arrowed diagonal pass from Trent Alexander-Arnold, Mane bobbed the ball up and down, before making it stick to his right foot as he darted in from the left. The shot was on, and most modern-day inside forwards cutting in onto their favoured foot would have taken it, but instead Mane knocked the ball around Mason Holgate with a touch of spin, as if he were a snooker player swerving around the blue, and all Xherdan Shaqiri had to do, having made a clever run in behind the defence, was send the ball towards the gaping half of the net at the far post.

Alexander-Arnold was involved in the next piece of magic, too. This time Mane collected a Van Dijk clearance in his own half, beating Alex Iwobi to open up the pitch for the counter-attack.

Alexander-Arnold sprinted forward, taking Mane’s pass with him. Shaqiri was in acres of space on the right and it seemed all that was needed now was for the full-back to pick the right time to square to his team-mate, who would have a golden opportunity to score his second of the game.

Between and initially behind them, Mane had continued his run, sprinting past Yerry Mina and referee Mike Dean so at the last minute Alexander-Arnold had another option who was closer to him and in a better position to score. Still at full pelt Mane hit the shot first time with his left foot and found the bottom corner.

He now had a goal to go with two assists which would have won him the Man of the Match award on their own. In many ways, he created this goal for himself too, through a combination of cleverness, desire and then technique, again on his so-called weaker foot.

This report of Mane’s highlight reel misses out the work in between which makes his contributions even more impressive. Many forwards wait for their chances so they’re fresh and alert when they arrive, but Mane works hard for his and for others’.

Perhaps he had worked too hard by the time a couple of chances fell to him late in the second period. He took Henderson’s long ball over the top expertly in his stride, but Georginio Wijnaldum crossed his path and he slid his shot wide. Shortly after, he had another chance from another good Henderson ball, and also had two chances to go down and claim a penalty under challenges from Pickford and Mason Holgate, but chose to stay on his feet as the opportunity passed. Had he gone down the VAR would probably have had no choice but to award the penalty, but the fact he stayed on his feet shows his current mindset, which is very Messi-like.

Mane is likely to be in the running the next time the individual gongs are dished out, but for a moment of time in the unacknowledged void between the end of year awards and the beginning of a new year, it felt like he was the best player on the planet.