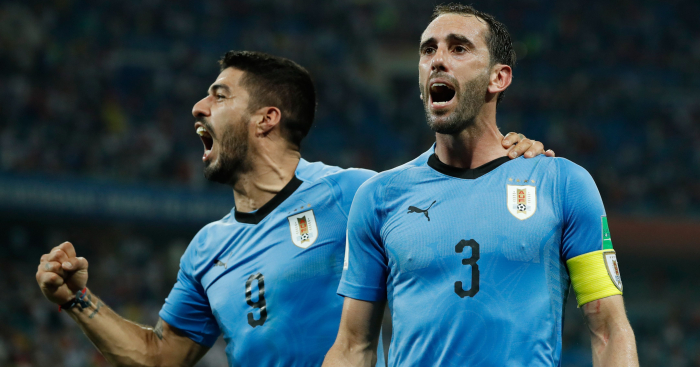 A few hours after one half of the game’s greatest duo exited the World Cup, Lionel Messi was joined in the departure lounge by the other. Messi couldn’t paper over Argentina’s cracks and, this time, nor could Cristiano Ronaldo hide Portugal’s flaws.

Messi was outshone by a brilliant individual performance by Kylian Mbappe, whereas Ronaldo came up against 11 of them. Maybe Luis Suarez cannot match his Barca team-mate and Real Madrid rival for star quality, but with Edinson Cavani alongside and a Uruguay army behind him, it’s a team that is more than a match for  any individual.

Uruguay and France will meet in on Friday in Nizhny Novgorod with both sides having recently discovered the blend that suits them best. In Didier Deschamps’ case, the puzzle has been focused around getting the best out of his creative talents. For Tabarez, the poser was finding a balance in his midfield. Now the veteran coach of 190 games in charge has cracked that conundrum, Uruguay will take some stopping over the next fortnight because either side of that engine room is world-class talent – individually, yes, but the units are even greater than the sum of their parts.

No defence has been as stingy as Uruguay’s so far. They were the only team to come through the group stage without conceding a goal and their run of clean sheets extends to three friendlies before they arrived in Russia. It is a rearguard marshalled expertly by Diego Godin, with the familiar presence of Atletico Madrid team-mate Jose Gimenez next to him.

Diego Maradona’s judgement may have been somewhat impaired of late but the Argentina great was clear on at least one thing this week. “The other day some journalists told me that Sergio Ramos was ‘a crack’ defender and I told them, ‘No, the one who is a crack is Diego Godin’. For how he plays the ball, his strength, and how he controls the game from his position – that, yes, is a real crack.”

Ronaldo’s recent record against Godin – supposedly a target for Man Utd – may have caused even him to allow a flicker of doubt to enter his mind ahead of their last-16 meeting. The Real star has failed to score in his last four derbies against Godin and Gimenez and his side have not beaten Atletico during that run.

Against Uruguay, when he wasn’t escorted into dead ends, Ronaldo hit brick walls. Only one of the Portugal star’s five shots – all from outside the penalty area – reached the target, with the other four blocked before they entered the box. Never mind a shot, Ronaldo didn’t manage a touch in the Uruguay box in the first half. He could only muster three during a second period Portugal spent the majority of chasing a goal.

When they got one, they greatest surprise is that it came so easily. Uruguay suffered one momentary lapse in concentration upon a short corner which was met by Pepe when it arrived in the box. Fortunately for La Celeste, Pepe returned the favour seven minutes later when his poor header allowed Uruguay a three-on-three to which Cavani applied the finishing flourish.

Of course, Uruguay’s defensive effort begins way north of Godin. Despite being a front two with 97 international goals between them, Suarez and Cavani recognise the importance of their role in protecting their own goal. Cavani attempted more tackles in the first-half than any other player on the pitch, with three of the PSG star’s tackles being made in his own defensive third.

Tabarez has also given Godin and Gimenez a proper shield. Their was huge buzz around Uruguay’s young, exciting midfield prior to the tournament but it took until the final group game for the coach to find the blend between attack and defence. After four personnel changes across the midfield four, Tabarez gave Lucas Torreira his first international start at the base of a remodled diamond, with Rodrigo Bentancur freed up to roam around Suarez and Cavani.

Torreira already looks like a seasoned international, and Arsenal’s fondness for the 5ft6in scrapper appears well-placed. The Sampdoria screener finished with a game-high seven blocks, but Nahitan Nandez and Matias Vecino played a huge part in funnelling Portugal in to Torreira’s area, stopping Uruguay’s full-backs being overworked too close to their own goal.

And, of course, then there is Suarez and Cavani – the strike pair apparently born to play together. They arrived into the world in the same city within three weeks of each other and their timing and proximity remains on the pitch. Cavani took the headlines on this occasion but Suarez was instrumental in a brilliant opener. The first seemingly came off Cavani’s cheek but only after the PSG star had switched play with a delicious pass before Suarez returned the favour with a perfect cross. The quality in Uruguay’s second came in the finish, though the weight of Rodrigo Bentancur’s pass was equally exquisite.

Having let their focus slip once, Uruguay never looked likely to allow another lead to go the same way. Portugal chased another leveller with eight shots, though all but one came from outside the box.

The tests have got progressively tougher for Tabarez’s men over the last four matches and France represent another increased challenge. The priority between now and Friday will be to nurse Cavani’s hamstring back to health, but with every side so far displaying chinks in their armour, Uruguay will fancy their chances against anyone.