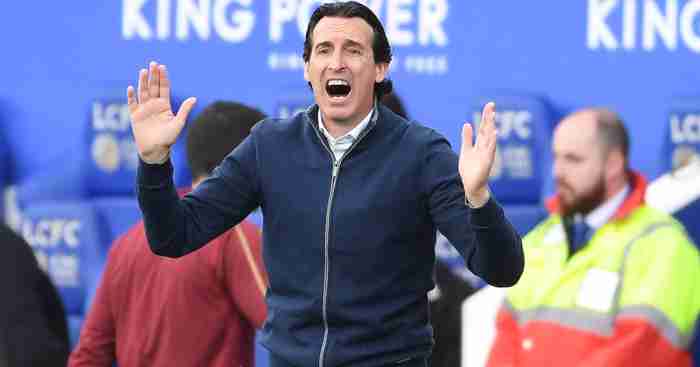 Whether or not it somehow ends with Champions League qualification, Unai Emery’s first season leading Arsenal will most likely be deemed a success. At the end of thoroughly miserable week for the Gunners, however, it is hard to recall exactly why.

So too is it difficult to fathom which of three defeats in eight days is the most damaging. The home reverse to Palace was a missed opportunity  and their surrender at Wolves was typical. At Leicester, where it was assumed there would be a reaction even from this flaky outfit, the Gunners were outclassed, out-fought and out-thought. Again, we are seeing the Arsenal failings which ran Arsene Wenger out of the Emirates.

But because Arsenal have managed to remain afloat unlike Manchester United after Sir Alex Ferguson took his hand off the wheel, Emery’s efforts in negotiating the tricky waters of transition have been widely lauded. The Spaniard has toiled to stop the Arsenal ship running aground, but steering it back on course will be the hardest job of all.

For certain, Emery will not succeed in making Arsenal a top-four fixture with the current hands on deck. As this and previous seasons have shown, beneath the manager, there is not a leader to be found among a playing squad seemingly all-too-willing to coast.

After dire, perspective-altering defeats to Palace and Wolves, the least Arsenal fans hoped to see at the King Power was for their players to rattle a few Foxes’ cages. Worryingly similar to United at the moment, the Gunners failed to meet even that minimum requirement.

Indeed, Arsenal were more listless than ever. Emery kept faith with four at the back, though Laurent Koscielny was given the rest he so obviously needed. The dread which greeted Shkodran Mustafi’s reappearance was only partially nullified by Pierre-Emerick Aubameyang’s return, but individuals mattered little in a team performance bereft of intensity or direction.

The Gunners began like a side unsure whether to engage Leicester or stand off. At times, half the back four did one thing while the rest did the other. Lucas Torreira and Granit Xhaka never begun to get close to Wilfried Ndidi, Hamza Choudhury amd Youri Tielemans, with the central midfield trio unexpectedly enjoying similar creative privileges as James Maddison and Marc Albrighton. On no occasion when any of the midfield five was able to get their head up to seek out Vardy did Arsenal’s back four look any more organised than their overrun engine room.

It seemed Emery’s plan to deny Vardy space on the break was simply not to bother having the ball. The Gunners limped in at half-time having had only 27 per cent of the possession, which could have been put down to Ainsley Maitland-Niles’ red card had Arsenal not had even less of the ball – 26 per cent – while they matched Leicester for man power.

Emery might have grounds for complaint over both of the right-back’s cautions which led to his 36th-minute dismissal, the second of which looked especially harsh. But failing to control a simple ball before lunging needlessly in Maddison’s vicinity neatly summed up Arsenal’s performance. Technically sub-standard and when the aggression came, it was mistimed and mis-directed.

Also, while my gut tell me I’m a fool to hold out any hope in this regard, this summer is MASSIVE. If there’s any genuine ambition we’ll see it in the transfer business, but I think Kroenke and KSE’s impact on this club is increasingly damaging.

You might say Arsenal were already playing with 10 men given Henrikh Mkhitaryan’s anonymity. In Mesut Ozil’s absence – a foot injury, apparently – the Armenian again shirked his service role for Aubameyang and Alexandre Lacazette. Only in six of 35 appearances this season has Mkhitaryan had a hand in a goal and though he can be useful on his day, given that comes once every six to eight weeks, Emery might as well not bother.

His centre-backs certainly didn’t when Leicester netted the goals their dominance deserved. Koscielny came off the bench at the break when Mustafi shifted to right-back and for almost 15 minutes, it seemed like the Gunners had got their story straight. With 10 men, a point which would have taken them back into the top four for a couple of hours at least, would have been seen as a positive outcome and the instruction, quite reasonably, seemed to be to preserve parity.

But Emery’s defence cannot keep clean sheets on the road. They have managed just one all season and when Tielemans trotted in to glance Maddison’s delivery inside Bernd Leno’s near post, it seemed most unlikely that Arsenal might earn only their second point of the campaign after conceding the opening goal.

When Vardy followed Tieleman’s lead in running through the gaping chasm in Arsenal’s defence to reach Kasper Schmeichel’s goal kick – a goal kick! – and kill off Emery’s slim hopes, you began to wonder which one of Koscielny and Sokratis had obtained the restraining order on the other. The centre of Arsenal’s defence is made up of their most senior players, yet they appear allergic to one another.

At times this week, it has almost seemed like these players were plotting to preserve their own status by denying Emery a Champions League place and, subsequently, the budget required to replace them this summer. This is when the hard work really starts for Emery. The manager’s priorities must be to strengthen the flimsiest of defences while reinforcing an even weaker mentality in the dressing room. To remedy all Arsenal’s ailments and claw back some authority within the top four with the kind of funds that the club are likely to make available will be a far bigger test than asserting his own position at the club last summer.