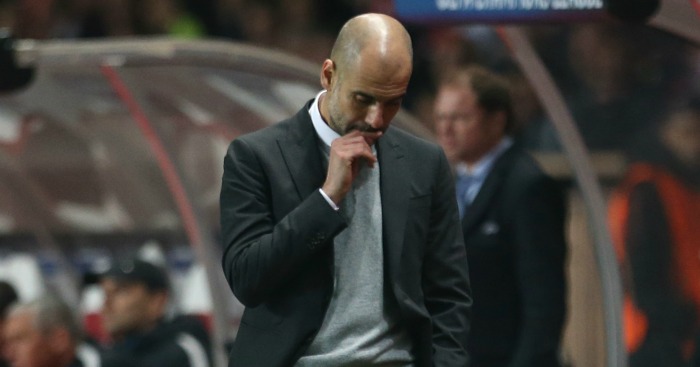 Manchester City cannot say that they were not warned. No sooner had we all wrung out our clothes after a sweat-inducing, breathtaking first leg, Pep Guardiola was insisting that his team would have to do it all again in Monaco. At least he got one thing right.

If that sounded like a defeatist attitude towards his own team’s capability in defending a lead, Guardiola had seen enough to be wary. As Monaco swarmed around City’s players with enough speed and accuracy to give everyone a migraine, Guardiola looked on aghast. His team selection, leaving Fernandinho exposed to a surging band of full-backs and attacking midfielders, was unfit for purpose.

If the manager’s plan was to fight fire with fire, he turned up at a burning building with a box of wet matches. City completed ten passes in the attacking third of the pitch during the entire first half, and failed to muster a single shot. Never before have we seen each of Sergio Aguero, Leroy Sane, Raheem Sterling and Kevin de Bruyne look so sluggish. Never have David Silva’s magic tricks appeared so stilted and transparent.

If the attacking flaws were surprising, the self-inflicted defensive wounds were quite the opposite. Six times City gave the ball away in their own half in the first 20 minutes alone, with John Stones and Aleksandar Kolarov the children allowed to play with the bigger boys for target practice. Real Madrid and Atletico Madrid conceded five and seven goals respectively en route to last year’s final. By the time exit was confirmed, City had let in 16.

Even when they dragged themselves back into the tie thanks to Guardiola’s half-time alterations and a marked improvement in attack, City were again undone by abysmal marking from a set piece. This is not a case of defenders being bemused by complicated instructions, but simply individuals falling short of their club and manager’s expectations. Guardiola will take the flak because that is how football works, but he will feel completely let down by his defenders.

Before Wednesday, only Arsenal had conceded more goals per game of the 16 clubs to make it through to the knockout stages. Of the teams that made it through, Juventus, Bayern Munich, Barcelona, Atletico Madrid, Borussia Dortmund, Monaco and Leicester City all faced fewer shots on target per game. This defence doesn’t deserve to be part of Europe’s elite.

Guardiola now has the first big headache of his City tenure: addressing the problems in a team that has conceded more and more goals in every season since 2011/12. The answer might lie in Sheikh Mansour’s bank balance, but money has not yet proved the magic solution for Guardiola, and it didn’t for Manuel Pellegrini.

While most of us may enjoy watching Guardiola’s Manchester City ‘entertainers’, few will be more irked by the tag than their manager. This is not the controlled dominance that City supporters had been led to expect. You’re only called ‘entertainers’ when you can’t defend properly.

In Martin Perarnau’s latest biography of Guardiola, The Evolution, he recounts a conversation between Pep and Noel Sanvicente, ex-coach of Venezuela, on the subject of defending. “The basis of my game is, for example, all about the defence,” Guardiola says. “My defensive strategies have always worked brilliantly for me and we concede fewer goals than everyone else in the league. Every single year.”

Those defensive strategies may indeed have worked before, but not so far in England. Claudio Bravo has proved to be a calamitous mistake, while one of Nicolas Otamendi or John Stones merits a starting spot only in ‘tallest dwarf’ terms.

It would be unfair to focus solely on City’s imperfections, for we have witnessed a coming of age in red and white over the last fortnight. The reality of football in 2017 is that many will have spent the two legs assigning Leonardo Jardim’s young, exciting players to European football’s super clubs, but that only urges us to enjoy the moments. Kylian Mbappe, Bernardo Silva, Fabinho, Benjamin Mendy, Djibril Sidibe, Thomas Lemar, Tiemoué Bakayoko; suddenly you’ve named seven of their ten outfield players as a frantic list of those aged 24 and under who you want to watch over and over again. The potential in this crop is astonishing. At least one of them will surely end up in Manchester.

Yet, inevitably, the focus will be on Manchester City’s failure, one which is inevitably Guardiola’s failure. For all the fanfare surrounding the Premier League’s clubs and their high-profile managers, Craig Shakespeare and Leicester City are England’s only remaining Champions League representatives. Questions to answer, and solutions to find.