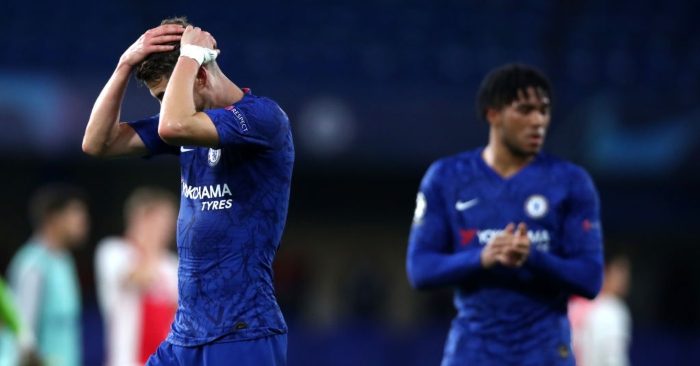 It was always ludicrous but the key to comedy is timing. Literally the day after The Sun told us that ‘the Premier League might just have the new Alex Ferguson’, Frank Lampard – who would surely be embarrassed by such a ridiculous comparison so soon into his managerial career – managed his Chelsea side to the kind of chaotic carnival of goals that should temper any giddiness about him or his flawed Blues. Neither are close to the finished product.

This iteration of Chelsea might be more entertaining than many of its predecessors, but it is also incredibly vulnerable. This kind of scoreline had been in the post; this is a Chelsea side that has conceded as many Premier League goals as Newcastle and West Ham this season, and more than the terminally fragile Arsenal. When Ajax scored within the first two minutes, the Dutch side become the seventh of nine visitors to Stamford Bridge to breach the soggiest of defences.

There have been mitigating circumstances – the absences of Antonio Rudiger and N’Golo Kante have been keenly felt – but Lampard chose to sell David Luiz this summer and Lampard chose to start this daunting clash against Ajax with Cesar Azpilicueta and Marcos Alonso as his full-backs. Within 35 minutes they had each given away free-kicks that led to goals and one had allowed a cross that the other had allowed his winger to score. Lampard at least saved Alonso from the ignominy of becoming a blue Granit Xhaka by hauling him off at the break.

Ten minutes after the re-start, 3-1 – for Chelsea had been gifted an early penalty – became 4-1 as Donny van de Beek was basically given the freedom of Stamford Bridge by a napping defence. Azpilicueta pulled a goal back to make it 4-2 but at that juncture, you would have got decent odds on just about any scoreline up to and including 7-5. It was that kind of game and Chelsea are that kind of team.

The chances of Chelsea somehow preventing Ajax from scoring again appeared incredibly slim, until the 70th minute brought the unwanted and undeserved Ajax hat-trick of a double red card and a penalty that Jorginho converted with what we are duty-bound to call his usual aplomb. That Chelsea then only managed one more goal in over 20 minutes is almost as embarrassing as the fact that Ajax still found it laughably easy to cut through this defence. Had they been reduced to just Quincy Promes, we would have backed him to muster at least one shot on target.

Is it a little churlish to be talking about Chelsea’s defensive vulnerability after a thrilling 4-4 draw? Perhaps. But there is no real credit due to Chelsea for a comeback that was a) handed to them on a plate and b) incomplete. Having pulled themselves back to 4-4 with 16 minutes and injury-time remaining against nine men, failing to win the game absolutely deserves to be described as a failure. Against 11 men they had zero control and the situation barely improved with the double dismissal; they were frantic, fascinating and flawed, just as they have been for much of the season.

This Chelsea side has exceeded most pre-season expectations, standing as they do on top of their Champions League group and six points ahead of fifth place in the Premier League – though that situation has certainly been aided by the travails of Arsenal, Tottenham and Manchester United – while playing entertaining and goal-laden football, but let’s not pretend that we are already in the presence of a managerial genius. At least not until he can build a defence that can keep out more potent teams than Newcastle.