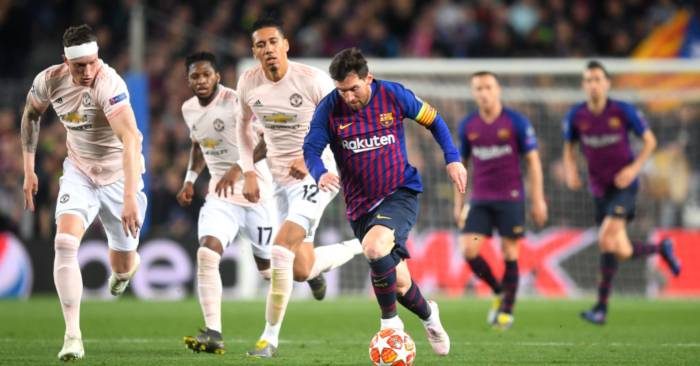 “We are physically taller than them, we are bigger than them,” boasted Ole Gunnar Solskjaer, just after claiming that his players “will run until the cramp stops them”. It was almost impossible not to laugh – here was the manager of one of the biggest clubs in the world, talking about his side like they were League One play-off hopefuls drawn against Manchester City on FA Cup third-round day. We’re taller, we’re bigger, we will run harder and they really won’t like it up ’em.

Solskjaer’s masterplan – and this is not a criticism, because what else could he do? – was to start with incredible energy and hope to shock Barcelona in the early stages, just as they did against PSG. They would then back off, work really hard, be aggressive, soak up pressure and then break quickly, knowing that Barcelona’s only real weakness is against the direct running of pacey forwards.

“Early signs extremely encouraging for Manchester United,” said Darren Fletcher on BT Sport as the clock ticked over to 1.52. Even at that juncture, you knew that United had probably let their best chances of the whole tie pass, Marcus Rashford hitting the crossbar and then Scott McTominay failing to control in the area. There were almost 90 minutes left to play, United had enjoyed the only chances of the game, and yet only a fool would have bet against Barcelona.

It’s easy to scapegoat Ashley Young (and we did after the first leg) but it did not take one man to allow Barcelona to score two quickfire goals – it took that one man to make a series of errors, but it also took Fred to be fooled, Phil Jones to back off, McTominay to miss a challenge, Fred to be dispossessed and then David De Gea to make the kind of error he usually saves for Spain. All barring the last error occurred because that player is simply not good enough to win a Champions League quarter-final against Barcelona. All the heart, running and bloody tallness in the world cannot level the playing field when the opposition simply has far better players.

There is serious work to be done on this United squad – from the awkward defence, through the workmanlike midfield to the not-quite-elite strikers. No team should head to the Nou Camp needing goals with a five-goal forward at the apex of its attack; by the end of the game, Lionel Messi had scored only one fewer goal this season than United’s four attacking starters in total. The commentators bemoaned the lack of a clinical finish from United in those early stages, but the truth is that they came into this game having scored just 15 goals in their last ten games. This was not about luck or the bounce of a ball, but simply logic. And logic suggests that this United side lacks the quality to compete at this level.

Solskjaer had said that “if it’s a game with a lot of goals in it, we have a better chance of going through”, but the real truth was that if it was indeed a game with a lot of goals, it was very likely that United were going to get battered. If you didn’t know that last week, you certainly knew it the moment Solskjaer tried to make a virtue out of his team being taller.