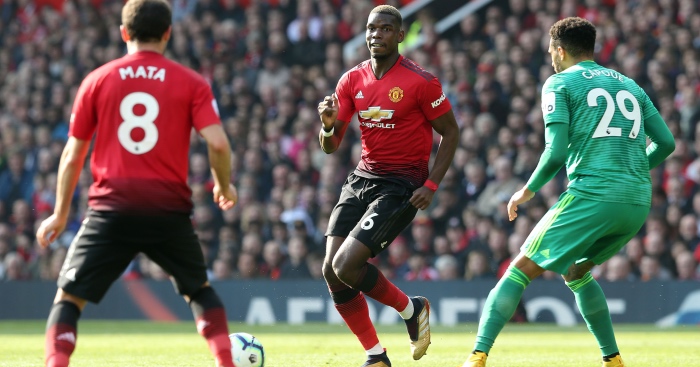 Now Manchester United have appointed Ole Gunnar Solskjaer on a permanent basis, the anticipation around Old Trafford has begun swirling around the upcoming transfer window. The new manager’s main priorities reportedly focus on his attack and his defence. But the midfield appears the area most in need of reinforcement.

That was certainly the conclusion to take from United’s edgy 2-1 win over Watford at Old Trafford, where the hosts’ lethargy bore a worrying resemble to the dark days of the previous two permanent managers. Nemanja Matic, Ander Herrera and Paul Pogba were all slow, sloppy and complacent; flaws that were not punished only because of Watford’s own failings.

The Hornets had more six more shots than any other visitor to Old Trafford this season while only Liverpool have restricted United to fewer attempts at home. Wastefulness and lapses in concentration at the back are the primary reasons Javi Gracia’s side aren’t celebrating a rare victory against the Red Devils.

The causes for United’s defence being overrun and their stymied attack can be found in their engine room. Solskjaer’s midfield is precariously balanced. One under-performer among his first-choice three throws the whole unit off kilter. Today, and in the FA Cup defeat at Wolves, all of them underwhelmed.

Perhaps this is the three regressing to the mean. Matic and Herrera struggled badly in the dark final days of Jose Mourinho, while Pogba simply could not be arsed. Solskjaer’s arrival offered all three new impetus but the effects from that shot in the arm appear to be waring off worryingly quickly.

Is Matic, who will be 31 by the time next season kicks off, mobile enough to anchor a midfield with title ambitions? Not any more it would seem. Mourinho’s exit freed the Serbian’s mind from the monotony of endless square passes but the legs certainly appear to be fading.

Perhaps any midfielder would be weary after a couple of seasons of doing Pogba’s running as well as his own. The France midfielder can cover the ground quicker and more gracefully than almost anyone when heading in the direction of the opposition goal. In reverse, Pogba appears to be weighed down by his own ego.

Herrera and Mata off and Pereira and Lingard on. Could easily have been Matic and Pogba off. All of midfield three have been very poor in this first hour or so

On a couple of occasions in the first half, Watford’s most dangerous moments came from sloppiness Pogba’s possession. Here, just like at Wolves and for months under Mourinho, the 26-year-old took too many touches and slowed United down almost to a standstill. Many said we saw the real Pogba when Solskjaer took over. Now it’s back to the familiar Pogba, the infuriating one, who because of his flirting with Real Madrid – Barca and Juve too – doesn’t have as much credit in the bank with United fans as he might like to think.

With only two years on his contract and the danger of Pogba being a persistent problem until he gets what he wants – whatever that’s a move or a fat new deal – United could explain away selling their record signing this summer. With Herrera, the decision is out of their hands.

The Spaniard is a few weeks from free agency and United appear understandably reluctant to meet his demands. To supporters, Herrera’s spirit has at times been a rare ray of sunshine on the bleak landscape of recent seasons, but to hand out a long-term deal on the kind of money the Basque star can attract elsewhere – PSG perhaps? – United are entitled to expect a little more bang for their buck.

Herrera was hooked just after the hour as United took their stodgy performance from the first half into the second, with Andreas Pereira coming on. Can the 23-year-old make the step up to become a first-team regular? After almost five years around the first-team, we still don’t know. Fred’s face is much fresher but, like his Brazil team-mate, his credentials are yet to be established.

Solskjaer’s top two targets are, apparently, a centre-back and a forward. Today, Chris Smalling and Phil Jones stood firm with little protection in front of them, while goals for Marcus Rashford and Anthony Martial mean that for the first time in 23 years, United have four players on 10 or more Premier League goals.

United might see holes to be filled in their defence and attack, but Solskjaer’s midfield is too often a gaping void.