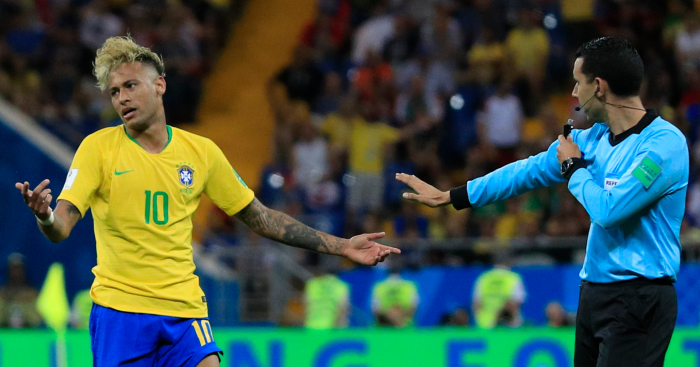 France struggled to break down Australia, winning only thanks to a penalty and own goal. Spain sacked their manager and then conceded three times, albeit to a Cristiano Ronaldo-inspired Portugal. Argentina failed to beat Iceland, the lowest-ranked team in their group. Germany lost to Mexico. Brazil were held to a 1-1 draw by Switzerland.

If there is one running theme throughout the first four days of this World Cup, it is that the likely pre-tournament favourites have succeeded only in providing their rivals with a healthy dose of optimism. Of the four semi-finalists from Brazil four years ago, three have failed to win their opening match and another aren’t even here.

In the build-up to this tournament, for which Brazil are still the favourites after their dropped points, we witnessed the Seleção’s progression under Tite after the dark days of 2014. This is no longer a team with bells and whistles but very little structure. Central midfield is so strong that forthcoming Manchester United signing Fred is fourth-choice in the position.

Yet Brazil followed the lead of France and Germany by turning in a slapdash, fractured performance. The first match of any tournament is best used to send an ominous message, but this raised more questions than answers. Is Neymar really fully fit – and how much rough treatment can he take? Do Brazil shoot too much from distance? And do the deficiencies in central defence remain?

A 1-1 draw against the team ranked sixth in the world is no disaster. Nor too might be finishing second in this group, if Germany do the same in Group F. But Brazil had only failed to win four group games in the last nine World Cups. Having seen others falter, Tite will be angry at his own side’s lack of conviction.

The biggest frustration is that Brazil had the match at their lightning quick feet. Philippe Coutinho is quickly earning an Arjen Robben-style reputation for scoring a particular type of goal. Receive the ball at feet on the wide left edge of the penalty area, shift it slightly and then curl the ball far beyond the goalkeeper’s reach. Coutinho has scored 11 times in 37 matches for his country; this was the sixth from outside the penalty area.

But from that point on, Brazil dozed. Possession is often overestimated as a reliable measure of superiority, but there is no doubt that having the ball is preferable to chasing Brazil while they pass it around with glee. Gone was the one-touch passing and overlapping full-back runs. Vladimir Petkovic’s team grew into the match and grew in belief.

If this new Brazil team prefers to soak up pressure than blow away the opposition – and neither method has more merit – they will need to improve their set-piece defending. Miranda claimed that a push stopped him clearing Xherdan Shaqiri’s corner, but he hadn’t even managed to jump. If it was a marginal call, the result should never have come down to such margins given their early dominance.

Brazil did produce a late assault on the Swiss goal, but another early theme of this tournament has been defensive resilience under pressure. On Saturday and Sunday alone, Iceland, Denmark, Serbia and Mexico have all thwarted a team flooded with attacking options as they attempted to steal a late goal. Switzerland followed that lead.

Watching the ten games of football between Friday and Sunday, it was easy to forget that England are actually in this tournament. There’s watching, enjoying and basking in World Cup matches, and then there’s watching England at major tournaments, and they really are two very different pursuits. The latter tends to cause far more sweating and swearing.

But of course the two are entwined with one another. England’s performance at this tournament is dependent on their own form, but also the displays of the countries inside and outside of their group.

If Gareth Southgate’s demeanour and the mood in England’s squad offer gentle reasons for general positivity, so too do the obvious flaws in the teams more likely than them to go far in this tournament. It’s not quite time to start singing about tackles by Rose or Sterling belting the ball, but there are fewer obvious reasons to be fearful than there were a week ago.