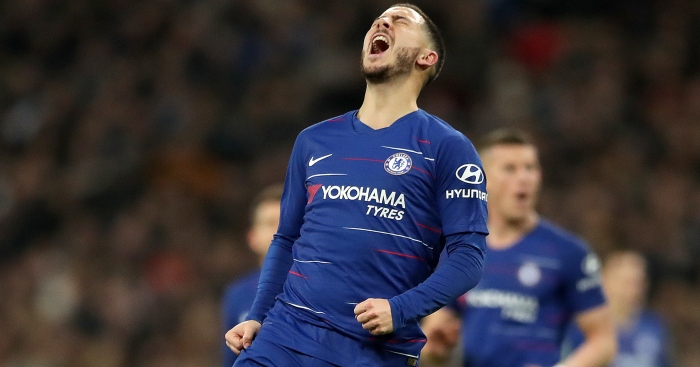 Tottenham recorded their third straight win over Chelsea in all competitions for the first time since 1963 but the night was far from a write-off for Maurizio Sarri.

His last visit to Wembley was. “I did not like anybody…we played very badly in all directions,” was the verdict after Chelsea surrendered their unbeaten record while being blown away by Spurs in November, but in the first leg of their Carabao Cup semi-final, the Blues competed on equal terms and restricted Mauricio Pochettino’s men to just Harry Kane’s penalty. Had they a competent centre-forward of their own, Chelsea would most likely be going back to Stamford Bridge in a fortnight on level terms.

Ever since Sarri arrived in the summer, the manager has been handicapped by Chelsea’s inadequate attacking options. Their impressive unbeaten run at the start of his reign was achieved in spite of Sarri’s central strikers and since that streak was brought to a shuddering halt at Wembley, the Italian boss has been exploring alternatives beyond Alvaro Morata and Olivier Giroud.

At the start of the season, after Giroud returned from the World Cup a goalless winner, it seemed to be a shootout between with the two centre-forwards for the leading role. But Sarri’s final answer to the question of Morata or Giroud must now be taken as ‘neither’.

Eden Hazard was again employed as a false nine, with Willian to one side and Callum Hudson-Odoi to the other. Hazard has spoken before of his reservations over the role’s more limited involvement and the width of the six-yard box is not his natural habitat, particularly when his own goal is in view as often as the opposition’s.

Of course, that did not stop Hazard being Chelsea’s most active threat. No one in blue played more key passes, had more shots or managed more shots on target but all of his best work was being done far enough away from Spurs’ goal for the hosts to be comfortable.

When he dragged Toby Alderweireld and Davinson Sanchez away from their posts, no Chelsea player was able to seize upon the subsequent space. N’Golo Kante made the best fist of it, with the holder-turned-roamer going closest for the Blues from open play when he struck the post in the first half.

That was one of the few occasions Chelsea got close enough to Paulo Gazzaniga to cause the Spurs back-up goalkeeper any discomfort. None of the visitors’ front three managed a touch inside the penalty area within the width of the six-yard box. Of Chelsea’s five shots on target, four were from beyond 25 yards out.

The one effort to test Gazzaniga from inside the confines of his box came from Hudson-Odoi. The Chelsea teenager, starting his second game this week on the right, drove at Danny Rose in the sixth minute before going on the outside to drill a low shot straight at the keeper. It was a promising start for the 18-year-old being chased by Bayern, but he was strangely reluctant to go down the same path again for the remainder of his 78 minutes on the pitch.

As a right-footer holding his position on the right wing, Hudson-Odoi was willing to run at the Spurs defence but almost always, he opted to go inside, rather than test Rose again by going the other way. Without a centre-forward busting a gut to feast on whatever is fed from the byline, Hudson-Odoi may well ask: what’s the point in getting there?

Chelsea's best chance at a trophy might be winning a Nobel Prize for their extensive and pioneering research on strikers who don't score goals.

When the Blues successfully switched play to Hudson-Odoi, the winger was so often confronted not only by Rose but also by Hazard. When Chelsea’s talisman demands the ball, you cannot blame a rookie for offering it up to him and, as a consequence, too often the visitors’ attacks became an exercise in possession rather than penetration.

When a centre-forward was sent for, it was Hudson-Odoi – by then shunted to the left by Pedro’s arrival on the hour – who made way. That may be one of the last times we see Chelsea’s academy graduate in a blue shirt if Bayern Munich get their way, but consecutive appearances that have seen action on both flanks suggests there is room for both him and Christian Pulisic next season.

Whoever occupies Sarri’s flanks next season and more immediately for the remainder of this campaign, their job would be made significantly easier by the recruitment or emergence of a competent centre-forward. Karim Benzema has been tentatively linked and Gonzalo Higuain has also been a target, even if the possibility of any deal for the striker – who has worked for Sarri previously at Napoli – is complicated by the Argentine being caught between AC Milan and Juventus.

Sarri can likely mend and make do with Hazard until the summer, such is the Belgian’s brilliance. But then it must become a priority for whoever makes the recruitment decisions at Stamford Bridge. Hazard may well be on his way while Morata will probably have beaten him to the exit door and Giroud is out of contract at the end of the season. If England international Tammy Abraham isn’t viewed as being ready for the first team at that point then most likely he never will be.

In the meantime, Chelsea can still reach Wembley again when for once Spurs would not be waiting for them, and Sarri can still lift his first trophy in English football. Hoisting the Carabao Cup aloft would be all the more impressive if his centre-forward shortage means he has to do it with one hand tied behind his back.