Home F365 Says F365 says: The only thing Liverpool lacked was a Messi… 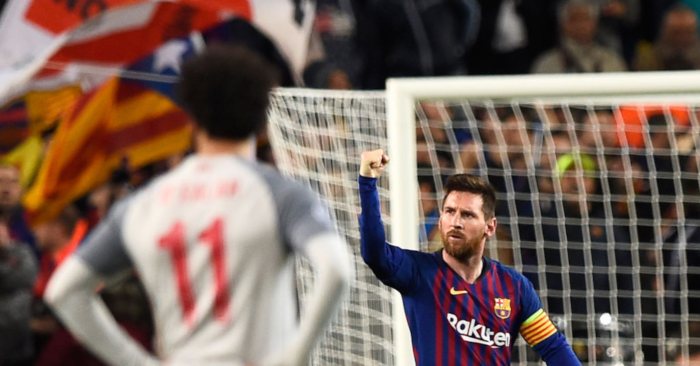 At half-time, the 1-0 deficit seemed just about fair – the difference between Luis Suarez finishing his chance created by an exquisite Jordi Alba pass, and Sadio Mane shanking his effort over the bar. Liverpool had matched Barcelona in all but that final, vital touch. They had gone toe to toe, chest to chest, head to head and all the body parts in between.

After 55 minutes, you thought that a Liverpool equaliser was likely, and might just be inevitable if Jurgen Klopp could act quickly enough to get more attacking verve on the pitch. He hesitated – as he too often does with substitutions – and after an hour, Erneste Valverde made the change that turned the tide Barcelona’s way again.

After 70 minutes, the equaliser seemed unlikely but a 1-0 defeat felt like the kind of result you could take back from the Nou Camp and into one of those famous European nights at Anfield. There was no shame in this narrowest of defeats and every hope that Liverpool could match or better that result in their own fortress. This had been an even contest, proving that Liverpool deserved a permanent place on this stage, in this company.

After 85 minutes, the tie was pretty much over. Liverpool had been hit with a devastating one-two of wildly contrasting levels of genius from the greatest player in the world. Liverpool had matched Barcelona but ultimately, they had no match for Messi. Nobody does. He wants another Champions League trophy and it feels very much like he will get another Champions League trophy. This may be no classic Barcelona side but that matters not a jot when he is in this kind of mood.

Liverpool made mistakes at both ends of the pitch; you do not lose 3-0 without the odd mistake. Having spent all season questioning their midfield while lauding their forwards and centre-halves, we now have to bemoan both the quality of the Reds’ finishing and the concentration of the PFA Player of the Year, who was caught on his heels for Barcelona’s first two goals. There will also be questions asked of Klopp, who stuck with Georginio Wijnaldum as a false 9 when the truth was that the Reds needed fresh attacking impetus.

But those are really just details because this should not be a night for recriminations and nit-picking but simply applause for the world’s best player and shrugs of the shoulders from Liverpool fans. In an era of analysis upon analysis, sometimes there has to be room for a simple ‘it just wasn’t their night’.

Less than five years ago, Liverpool lost only 1-0 in Spain to Real Madrid but Brendan Rodgers had calculated so little chance of success that he played Lazar Markovic and Fabio Borini while leaving Steven Gerrard on the bench. They sacrificed that game because their manager believed his team were so frighteningly out of their depth against a team from the European elite.

This scoreline looks harsher, but this was a Liverpool side that went to Barcelona believing that they were equals to the Spanish champions, that they belong in this company. They rattled them, they forced them deep, they made them change their tactics and resort to more direct football. Even in the midst of a post-Messi hangover, that should provide crumbs of comfort and the certainty that this Liverpool will contest many more semi-finals. Hell, they may even still contest this one. Stranger things have happened at 3-0 down.