Home F365 Says F365 Says: There is no recharge option on Sanchez’s batteries… 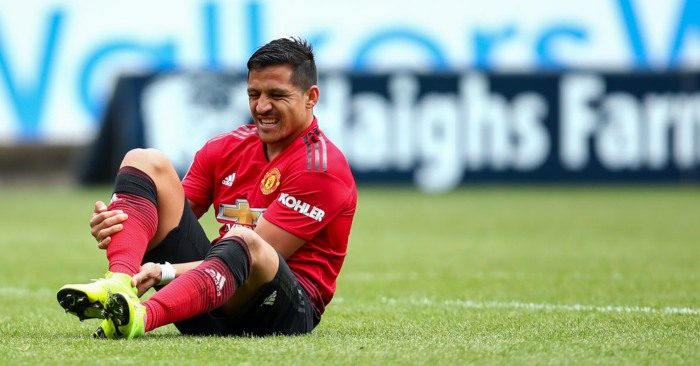 He’s been running for years, but only now does he look like his batteries are losing power. It has been a tough couple of years for Alexis Sanchez; one of football’s most talented players over the last decade or so, the Chilean is in danger of seeing his career simply peter out. There are many reasons for his decline but the fact is that – at the age of 30 – his body is catching up with him. Since 2014, the year he left Barcelona for Arsenal, he has had just one summer where he was able to truly rest and recuperate. Ironically, it was last summer, when he and his Chile teammates watched the World Cup in Russia unfold from afar.

Inspiring his country on the biggest stage in Brazil four years prior was the start of a long, tiring period for Sanchez, before back-to-back Copa Americas (both of which were won by La Roja), the Confederations Cup, and yet another Copa America since. He is an all-action forward, too, someone who rarely spares any energy, so it is understandable that so much football will begin to take its toll, especially in an era when players are entering their peak years earlier because of the game’s sheer intensity.

His move to Manchester United in January of 2018 seldom felt like a perfect fit, but it has been an unmitigated disaster for a number of reasons; some are about the deal, some are about the state of the club as a whole, but most of them are simply because Sanchez himself has lost what made him an elite player in the first place. Confidence is one thing, but now he is physically struggling to reach the bar he has set so high, and it is tough to come back from that. He looks set to move on before the end of the month, with Antonio Conte keen to take him to Serie A to join him at Inter.

It has been said many times before, but the transfer policy at Old Trafford has failed over recent years and the Sanchez deal was a case in point. His situation also made clear the issues with contracts at Arsenal; far too often would Arsene Wenger allow his key men to run their deals down at the club. It happened with Robin van Persie, Samir Nasri, Gael Clichy and Ashley Cole, with Aaron Ramsey joining Juventus on a free transfer this past summer, proving the issue still remains.

Sanchez and Mesut Ozil had six months remaining on their deals, and while the latter eventually penned a new one, the former made it clear he wanted to leave, preferably to join long-term admirers Manchester City, though Conte was also keeping an eye on the situation at Chelsea. As happened so many times before, United and then manager Jose Mourinho threw money at the player to trump their rivals, in lieu of finding a system that suited him. As a result of that lack of structure, Mourinho was sacked and replaced by Ole Gunnar Solskjaer, who wants to take the team in a younger, fresher direction, despite recently insisting Sanchez could still have a part to play.

Just three Premier League goals and a reported salary of almost £500,000 per week would suggest otherwise, but perhaps Sanchez deserves a little sympathy. Like a number of attacking players who get close to Lionel Messi, he has not been able to show his ability consistently at the top level. Never out of the Argentine’s shadow at Camp Nou, he did receive the platform and adulation he desired at Arsenal, and probably should have appreciated it more, but the Gunners were thwarted too early in the Champions League, often by Bayern Munich. A reunion with Pep Guardiola – who took him to Barcelona – at City may have helped him, but he is the quintessential Mourinho attacking player: direct, energetic, but disciplined with a good work rate. While it is easy to criticise him for not joining City, it should have worked across Manchester anyway, and a huge part of why it has gone so badly would have impacted him wherever he went.

The same logic that made a move to United appear suited makes Inter ideal, too. Conte is known to be a big fan, and he is building something at San Siro. With a slight reduction in expectation in Milan, and in the pace of the game he’ll be playing, there is a chance of a fresh start. Sanchez is a fit for the formation and tactical approach Conte is looking to implement, too, which is why he was originally keen to take him to Stamford Bridge. The Italian aims to give his creative players license to impact the game closer to the goal, even if they start on the left – as Sanchez often does – or right, with width being provided by wing-backs. In this case, he would be linking up with a former teammate after Romelu Lukaku made the exact same switch earlier in the transfer window. Serie A would welcome him back with open arms after a remarkable spell at Udinese between 2007 and 2011, but sadly they would not see the same player.

There can be no getting away from it; Sanchez is in decline. Yes, he is down on his luck and yes, a move back to Italy could be exactly what he needs. But his all-action career was always likely to take a toll earlier than with most players, in part because he hasn’t had enough rest over the years. Mistakes have been made in his time at Manchester United and he could arguably go down as their worst ever signing, but his batteries are running out and that, unfortunately, is a fact of life. Looking back, he was never likely to have the impact at Old Trafford that was expected of him. Don’t go looking for too much at San Siro, either.