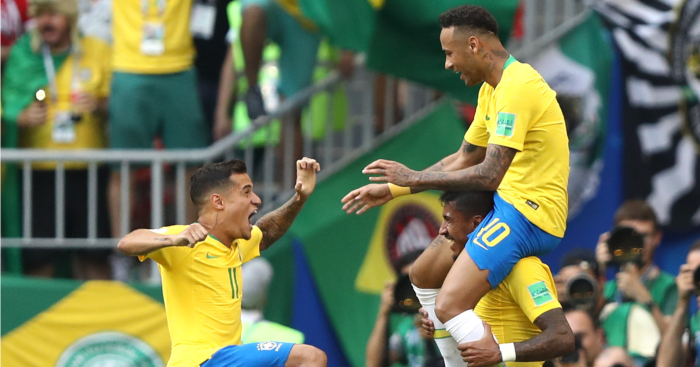 Two days shy of four years on from their lowest low, Brazil will play again for a place in the World Cup semi-final and their shot at Mineirazo redemption. This World Cup has already produced too many shocks for any goliath to truly feel secure, a tournament played out on thin ice, but in the searing heat of Samara Brazil produced the most complete performance of any team in these knockout stages so far.

Germany’s shock group-stage exit, left Seoul-searching after calamitous defeat, allowed an entire nation to breathe a sigh of relief. The only thing worse for Brazil than losing 7-1 to Germany in a World Cup semi-final would be suffering a similar humiliation in the final. The two were drawn to potentially meet on July 15.

The demons of Belo Horizonte will only – can only – be exorcised by Tite leading this team out of the darkness and back into the light. Brazil had never lost to Mexico at the World Cup, but then Germany had never been eliminated in the group stage. They, Spain, Portugal and Argentina are already contemplating on what might have been. Assume nothing, plan for everything.

Brazil were led, in his own unique way, by their superstar. Until Monday, we had seen only glimpses and peeps of Neymar in this tournament, like watching a flirtation scene in a Jane Austen novel before the rugged sex of the knockout stages. Between Edinson Cavani, Kylian Mbappe and him it has been a special week for Paris Saint-Germain’s front three. Did you honestly expect Neymar to miss out on the adoration?

This was a snapshot of pure Neymar, a condensed version of his personality and his play in 90 minutes. Seven shots, five chances created, fouled five times, a goal, an assist and an extended period of playacting that lost him as many admirers as the rest of the list gained him. As we approach the beginning of the end of the Messi and Ronaldo era, Neymar stands with a foot in both camps. Everything is a brash affectation, but nothing can hide the brilliance.

But therein lies Neymar’s magnificence. Just as you think he’s frustrated and under par, just as the defender takes their eye off him for one minute, he sparks. His threat is both potent and latent. Missed shot, failed dribble and moan at the referee, then backheel, late run, slide and goal. 0 to 1-0 in three seconds. And that was that.

If Brazil’s footballing curse may soon be lifted, Mexico’s ‘quinto partido’ stays real. They remain a bizarre statistical anomaly, a country whose consistency at qualifying from the group stage is matched only by their determination to trip over the first hurdle thereafter. Six times in succession El Tri have exited the World Cup at this stage. They have never won a knockout match outside their own country.

By now, Mexico are guilty of self-determinism and thus self-sabotage. It is not the goal itself – reaching the quarter-final – that has defeated El Tri, but their fear of that goal. The fear haunts and consumes them until it becomes an insurmountable mission.

What other explanation is there for a 3-0 defeat to Sweden after beating the reigning world champions and winning both of their first two fixtures in Russia. Brazil instead of Switzerland; four places in the world rankings, but a vast difference in quality. Monday was Mexico’s Groundhog Day of the Dead.

Mexico started at a frankly ludicrous pace, their front three snapping at the heels of Brazilian defenders as if early goals counted double. In the first 20 minutes they had 12 touches of the ball in Brazil’s penalty area before their opponents had managed one at the opposite end. Neymar was frustrated, Gabriel Jesus a wisp of his Manchester City norm and Philippe Coutinho swarmed by a green cloud.

The absence of Dani Alves (pre-tournament injury) and Marcelo (soft mattress) deemed that Brazil’s greatest tactical strength had become their weakness. Filipe Luis was exposed by Hirving Lozano, while on the right Fagner could have been substituted in the first 30 minutes such was Carlos Vela’s joy. In central midfield, Andres Guardado controlled the game in the manner of a ruler surveying his kingdom.

It is easy to criticise Mexico in hindsight for going off at such a pace that stitch was inevitable, but there is no right way to beat this Brazil team and certainly no blueprint. Thiago Silva and Miranda are the best central-defensive pairing left in the tournament, while Casemiro and Fernandinho are excellent midfield patrollers. Even the suspension sustained by the former need not be a cause for long-term headache.

But Tite’s attack still grabs headlines and dominates the discussion. Neymar is the leader but also the perfect lightning rod. In the group stage it was Coutinho who played in his shadow, never more than ten yards away from his childhood friend as Brazil countered. Against Mexico, it was Willian’s turn to benefit from his teammate taking two or three markers. The Chelsea winger completed one fewer dribble than all of his teammates combined and created the game-turning goal. If The One doesn’t get you, another one will. Roberto Firmino must be the best back-up striker in world football.

Brazil and Tite will not be judged until the second week of July. Brazil have now reached the quarter-finals in their last seven World Cups, so certain achievement comes as standard. But, unlike in 2014, there is no soft underbelly being covered up by those with haunted expressions and fear in their eyes. Neymar is the star and attacking is the strength, but this is a team not a collection of individuals. Samba is matched by steel. They will take some stopping.