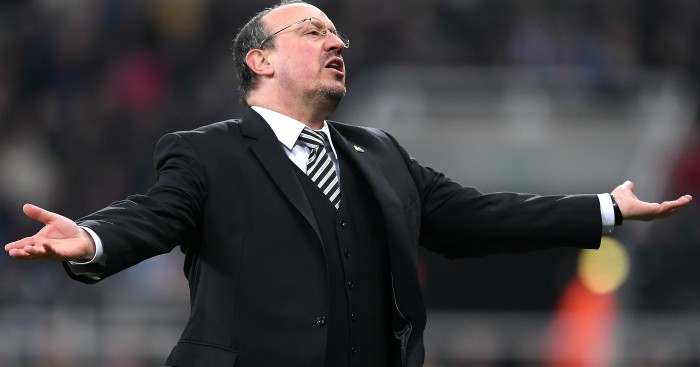 The meeting of Newcastle and Swansea to some represented just one of Saturday’s six-pointers. As it transpired, both seemed all-too-willing to accept just one.

With the battle at the bottom seemingly being fought between anyone in the lower half of the table, matchday 23 gave eight of the 11 teams placed 10th or below an opportunity to make gains on those around them.

So at St James’ Park, both sides must have recognised the value of victory. Indeed, Newcastle would have been in the top half of the table at half-time had they taken any of three very good chances in the first period, while Swansea’s best-case scenario on Saturday night would have seen them remain in the bottom three but to pull within four points of 13th place.

Alas, neither side had the quality to see off the other, with Swansea seemingly coming for a draw and Newcastle apparently not too perturbed to allow them one. Rafael Benitez’s side slip to 14th after extending their winless run at home to seven matches, while Swansea have been cut adrift at the bottom following West Brom’s first win under Alan Pardew. The four-point deficit Swansea hoped might separate them from 13th is now the gap to 17th.

The same failing hampers both Magpies and Swans. Neither possesses a potent attacking threat, the kind that makes the difference in an otherwise even contest such as this. Unfortunately for the managers, neither can bank on adding that necessary quality during the transfer window.

Benitez has whined long and loud about his restrictions in the market. That is not to say his complaints are not justified but Mike Ashley’s relucatance to cough up any spending money and the lack of progress with any  takeover means the manager’s protests are sure to fall on deaf ears. The airing of his grievences now seems to have become an act of self-preservation.

The petition for an official name-change starts here. https://t.co/w7nuZbc1EF

Benitez reportedly wants a goalkeeper, a midfielder and a striker this month, while others have also suggested a centre-half to play alongside Jamaal Lascelles. The manager’s selection today of an XI which came up from the Championship last season, deliberate or not, was another hint at the scale of the changes needed for Newcastle to progress.

Fortunately for Benitez, though his squad may be as limited as he keeps telling us, he has a group of players who are clearly desperate to succeed for him. They will be out-thought a numerous occasions between now and the end of the season, but they will rarely be outfought, which will stand the Magpies in good stead in comparison to some of their relegation rivals.

Of all the areas identified as being ripe for improvement, it seems the centre-forward position is the one most in need of reinforcement. Dwight Gayle was given a start against Swansea but the striker looked desperately short of confidence and a cutting edge during his hour on the pitch. Gayle passed up two gilt-edged headed chances inside the opening 12 minutes and another presentable opportunity on his left foot early in the second half before he was withdrawn.

Joselu came off the bench and quickly scored a crucial equaliser that owed as much to the Swans’ lax defending as any potency from the hosts. Joselu’s strike puts him one ahead of Gayle on four as Newcastle’s top scorer. Only West Brom have a highest scorer on fewer goals.

Swansea’s attacking options appear similarly inadequate and though they have Tammy Abraham to come back, relying on a youngster finding his feet in his maiden Premier League season is unlikely to be a sure-fire plan for safety. Nor can Carvalhal rely on Andre Ayew or Wilfried Bony, who’s comical airshot late on summed up his fortunes since returning to the club in the summer. Oliver McBurnie grafted on only his second top-flight start but a basement battle is no time to be blooding the Scotland youngster if Carvalhal is expecting a quick improvement.

At least the new manager appears to have stamped his identity on this Swansea side, who now seem insistent on playing out from the back, even if it is a gamble with the sometimes-limited players at his disposal. So while his work on the training pitch is evident, when it comes to recruiting Carvalhal has laboured the seafood metaphor already this window, saying he is looking for lobster and sea bass but may have to settle for sardines.

If you take Benitez at his word, he would apparently settle for whatever scraps they chuck off the side of the North Sea trawlers. But, while a loan deal for a striker is a must, Newcastle appear to have just enough to get through to the end of the season unscathed. Benitez, being the calibre of coach he has proven to be in the past, may be wisest focusing on mending and making do for now to retain a comfortable cushion on the drop zone, rather than continuing to fight a battle he appears destined to lose.