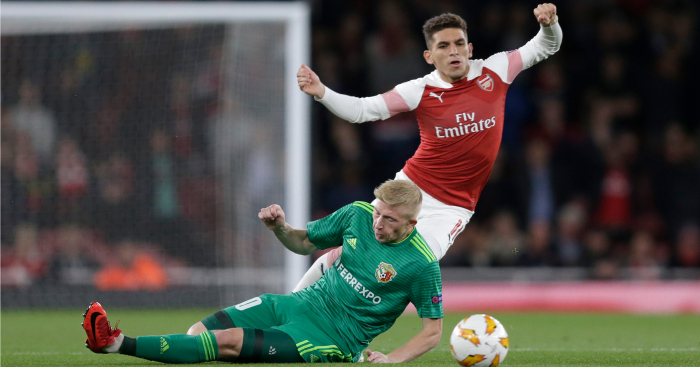 After highlighting the importance of the Europa League to Arsenal this season, Unai Emery insisted last week that he would not be making wholesale changes to his team selections, as Arsene Wenger did last year before he realised the Premier League offered no safe passage to the Champions League.

The new boss changed his tune somewhat this week, with his eight changes only one fewer than the nine Wenger made for the Gunners’ opener in this competition last season. If anything, this was a slightly less experienced XI than the side which repelled the Cologne invasion a year ago but Emery’s side was chock-full of players eager to prove a point.

Lucas Torreira and Bernd Leno were the newest and therefore the most intriguing names on the team-sheet and the Germany and Uruguay internationals will have been champing at the bit after a start to life at Arsenal which has involved significantly less game-time than they would have envisaged upon joining for a combined fee of close to £50million.

Against the Ukrainian Premier League’s fifth-placed side, Leno will have expected that there would be few chances to impress. Emery seems to have taken a gentlemanly approach to his goalkeeping dilemma because, presumably, he did not sign Leno from Bayer Leverkusen to be number two. Leno certainly did not move to north London to watch from the bench, but Emery has offered a compromise by giving Cech the opportunity to re-apply for his own job. The new manager’s specification for his goalkeeping position is rather different to Wenger’s and the vacancy for a No.1 comfortable with building from the very back is still unfilled.

Leno’s first involvement was probably his most telling. Barely a minute had passed when the 26-year-old keeper played his first goal-kick square before receiving the ball back as two Vorskla attackers began to swarm the stopper. Leno retained his composure to split his opponents with a 40-yard lofted pass onto Mohamed Elneny’s chest.

The debutant keeper had made his point within 75 seconds but the remaining 89 minutes provided Leno little opportunity to really emphasise it. Vorskla managed three shots on target – one from 35 yards that gave Leno little more than fielding practice, but the two late on which ended in his net will infuriate the keeper. He had little chance with either shot from the edge of his box but still he was denied the opportunity to claim Arsenal’s first clean sheet of the season upon his first appearance.

After Leno’s first concession, the camera cut to Cech and if the veteran wasn’t widely known as a good egg, you might assume that was a smirk across his face as he looked at his feet while his rival for the shirt fished the ball out of the back of his net.

Neither was this the ideal opportunity for Torreira to impress, but the Uruguay midfielder has already achieved that in five substitute appearances. Torreira is a terrier of a midfielder, the like of which Arsenal have refused to recruit for too long. He will make a difference when the Gunners are hunting possession against their big six rivals, but this Europa League run-out was a chance to showcase his ability on the ball.

Too many modern midfielders are too happy simply to bounce it around, getting their stats up, without influencing the game. Torreira is old-school in more ways than his work ethic; his first look in possession is always forward. Even from so deep where he is almost stood on his centre-back’s toes, the Uruguayan’s primary intention is to look beyond the opposition’s rearguard.

As the deepest midfielder, with Elneny pushing forward to no great effect, Torriera played more accurate long passes than any team-mate and also provided the most crosses of any Arsenal player. Still, many home fans will largely remember his attempt to tackle from the floor with his head during the first half. Presumably, Phil Jones is still revered in these parts for his match-saving lunge at Olivier Giroud’s feet in 2015…

This victory was the start of an unprecedented run of four home games in ten days for Arsenal. Everton, Brentford and Watford all arrive at the Emirates before a trip to Qarabag in the Europa League precedes two more Premier League home matches against Fulham and Leicester. The next month provides Emery’s men with a wonderful opportunity to build some momentum after a slow start.

Leno will most likely have to watch on as his new team-mates seek to make a statement of intent under their new boss in the coming weeks. Torriera, though, is ready for his central role.