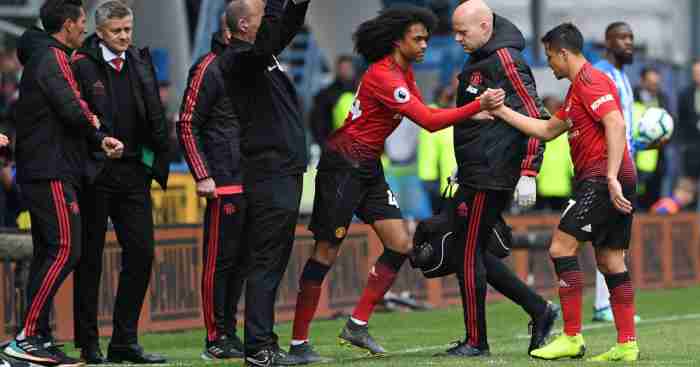 Before the rebuild must come the dismantling of this Manchester United squad. Ole Gunnar Solskjaer is surely relishing the opportunity to put a wrecking ball through his deadbeat dressing room.

Had United not been kept dangling by their stumbling rivals in the race for a top four spot, the manager might already have begun his demolition job. But while a Champions League place remained a possibility, Solskjaer seemingly felt obliged to persist with some of the stars who swapped their boots for flip-flops upon the announcement of his permanent appointment. Now, one game from the end of an utterly wretched season for the Red Devils, Solskjaer can reach for his hard hat and start swinging.

Their abject performance at Huddersfield showcased precisely how charmless this Manchester United really is. It is hard to summon up a single endearing quality about a squad which lacks not only technique and flair but, more damningly, fitness and drive.

In which direction does Solskjaer swing first? Paul Pogba would doubtless offer himself up if the impact landed him at Real Madrid, but so many of his fellow flops should follow the midfielder out of the exit that it surely is not possible to trim all the fat in one go.

Such is the scale of the whole job, it simply cannot be completed in one summer. Even with competent project managers, which United plainly lack, there would be little hope of rushing through a restoration of the Red Devils to the top table of English or European football.

Recruiting three, four, five players before next season while shifting out a similar number will only serve to act as a hasty bodge job. Now, without the Champions League football that the United hierarchy were hoping to dangle as their biggest carrot to entice their targets to the wrong side of Manchester, Ed Woodward will instead have to use what he likes best: cold, hard cash.

As Solskjaer suggested, agents are queueing up to offer their players to United, but most likely without the consent of those they represent. Of course Old Trafford remains an attractive destination, but primarily to those looking to furnish their bank account rather than their medal collection.

United cannot trust the transfer market as their route back to where they feel they belong, unless the Glazers and Woodward are content with that being where they currently lie: sixth.

This Huddersfield team are statistically one of the worst sides to have ever played in the PL. Man Utd have made them look decent today. Shambolic performance yet again. Back into the Europa League they go.

Fortunately for Solskjaer, United’s academy has already emerged from its own period of neglect and underperformance. The timing of United’s latest fall from grace coincides with the emergence of one of the most exciting crops of youngsters in recent years. Never has there been a better time to pick the likes of Tatith Chong, Angel Gomes, Mason Greenwood and James Garner.

Only Greenwood didn’t travel to Huddersfield owing to injury and Chong was dispatched from the bench to replace Alexis Sanchez in an exchange which United fans will hope was as symbolic as it was practical when the club’s biggest earner succumbed to another knock.

Chong’s first eye-catching contribution? A sprint. The simplest demonstration of some effort and drive to close down Jonas Lossl represented an obvious improvement to a United side that drifted listlessly for an hour after a nippy start which saw another home grown talent, Scott McTominay, grab his second goal of the season.

Isaac Mbenza’s equaliser rendered next week’s meeting with Cardiff almost irrelevant but the youngsters offer Solskjaer an easy opportunity next Sunday to score some points with supporters desperate to see a line drawn through a dreadful season and a miserable era.

And beyond next weekend, there is a bigger role for youth in United’s rebuild.

Despite the trailing of every system in the tactics textbook borrowed from Mike Phelan, we have to presume that Solskjaer’s preferred formation is 4-3-3, in which case he needs at least one, possibly two wingers or wide forwards. In Greenwood and Chong, he has a couple ready to take the next step, whether or not another 19-year-old, Jadon Sancho, can be tempted back to Manchester.

Solskjaer’s engine room also needs urgent attention, especially if Ander Herrera is intent on making the most of PSG’s generosity. McTominay has demonstrated that he can serve as more than Jose Mourinho’s pet, while Garner possesses an eye for a pass and the mobility that Nemanja Matic seems to be losing with each week that creeps slowly by at Old Trafford.

Solskjaer revels in the chance to reference Sir Alex Ferguson’s work and it is hard to believe that the current manager will swerve the opportunity to follow in the footsteps of his greatest influence, even if he won’t use his parking space.

This is hardly 1995 all over again, when the Class of ’92 graduated to replace three players Ferguson felt were doing more harm than good. Then, the Red Devils had missed out on a second consecutive Double by agonisingly slim margins, the type of failure United can currently only dream about. The likes of Gary Neville, David Beckham and Paul Scholes also had senior players of the stature of Eric Cantona, Roy Keane, Steve Bruce and Peter Schmeichel to lean on and the type of leadership so desperately lacking today.

There is a startlingly obvious need for astute and expensive recruitment – the partnership of Ashley Young and Phil Jones in central defence at The John Smiths’ Stadium highlighted that. But it will take more than transfers to get United back on track and give their supporters a squad they can begin to identify with once more.