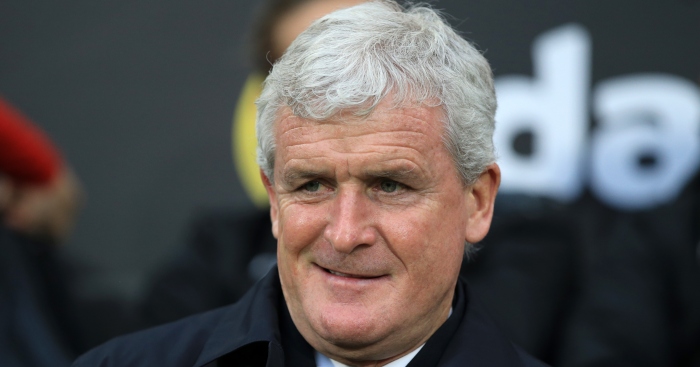 Only one manager has been in charge of more than Mark Hughes’ six Premier League clubs. He may never now match Sam Allardyce’s record seven-club haul (though nothing would surprise us as money continues to flow for old, ropey managers) but he is now almost guaranteed one landmark: Hughes has one month to become – or to avoid becoming – the first manager to be sacked by two Premier League clubs in one calendar year. Right now that feels far, far more likely than Hughes being in charge of Southampton at the end of another survival season.

His personal 2018 record? Three wins and just 16 points from 22 Premier League games. That’s fewer points than Swansea have picked up in the Premier League in 2018…and they were relegated in May. Defeat at Fulham on Saturday saw his points-per-game record drop to a miserable 0.76; that’s lower than the abysmal QPR spell which heralded the first of a probable hat-trick of sackings from clubs in serious relegation trouble. Hughes has now taken 31 points from his last 39 matches across two different clubs. We are now way past the point where anybody can point to his experience and make a case for anything other than change at Southampton.

Extraordinary. Hughes may never get relegated but his clubs certainly do; both QPR and Stoke went down after his sacking, though Hughes will presumably tell you that relegation was a consequence of that rather than due to his management. He had promised in May 2012 – after QPR had initially survived the drop – that “there is no way we will be in this situation again in my time here” and he then proceeded to fail to win a single one of their opening 12 games of the following season. Of course, it wasn’t his fault.

After initially impressing at Stoke – reminding us all of the manager who excelled at Blackburn – Hughes’ Potters progressively got worse, culminating in a run of ten games that featured seven defeats. The sack came within three weeks of his “I don’t do relegation” claim, with Paul Lambert unable to join Hughes in keeping that off his CV.

It was astonishing therefore that Southampton appointed Hughes in March, as was any claim that the Saints’ survival was anything close to a Great Escape – their eight points from eight games was not miraculous, just enough. They had matched that record in the eight games before he came; he literally made no difference.

The underwhelming nature of that survival meant that Hughes did not start this season with a swell of support after he was unimaginatively handed a three-year deal. But as usual, Hughes spoke as though Southampton’s relegation struggles would never happen again on his watch. How could they? “We view last year as a setback to where the club wanted to be but more a lump in the road,” he said in August. “We want to be in the top half of the Premier League, hopefully competing for European places.”

So of course it is a mystery to Hughes how Southampton could possibly now find themselves in 18th, a full seven places below their standing in a Premier League wage table. His response to calls from his own fans at Fulham for his sacking was predictable. “At times it’s a little bit unfair, because sometimes people smell blood and go after it and chase it and paint the situation in a different light than it actually is,” he moaned, incensed that people would draw attention to his now-abysmal record as Southampton manager.

“It doesn’t faze me,” he continued. “I’ve gone through these periods before. You just get on with it and get on with your job to the best of your ability.”

He has gone through these periods before, and it has – in recent times at least – always ended with his sacking. He absolutely should be fazed, because the only man who seemingly retains faith in Hughes is Hughes himself. That faith is unwavering but it is not enough. Right now, the only reasonable explanation for the delay is that the club do not want to burden his successor with opening games against Manchester United and Tottenham. It cannot be anything that they saw or heard at Craven Cottage, nor on Tuesday night at the King Power Stadium as they tumbled out of the League Cup.

“If you get yourself in a winning position, which we were in the first half, very comfortable in the first half, and all of a sudden they get two quickfire goals and we go in at half-time 2-1 down. I don’t think anybody who was here saw that coming,” said Hughes on Saturday. The problem is that pretty much everybody saw that coming, including your own right-back: “We were winning 1-0 and I had a feeling that we [would] get the 1-1 because we were very exposed, and then maybe after 1-1 our head was gone immediately.”

If the numbers do not convince you, allow Cedric Soares. He knows. The only thing that would truly surprise us about Southampton now is if they ended 2018 without making Hughes a reluctant (and entirely blameless) record-breaker.