It's not Scott McTominay's fault that standards have slipped at Man Utd. He's one of the few upholding them... 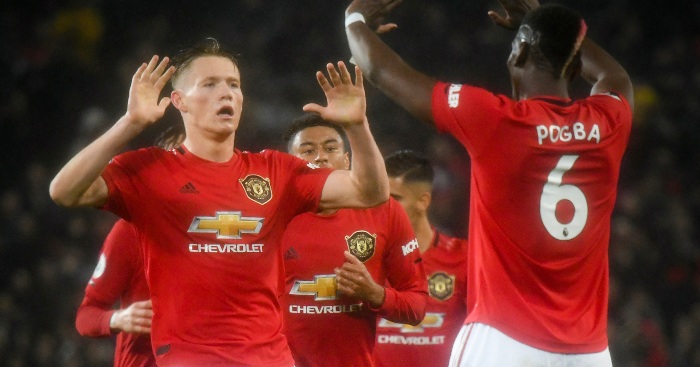 ‘He is no Duncan Edwards,’ noted The Independent in the wake of Scott McTominay bossing the midfield for Manchester United against Arsenal on Monday night. ‘But in a period when mediocrity is the Old Trafford standard he floods the space around him with light.’

McTominay must by now be used to scratching around for the praise he deserves. So often, it comes with a caveat themed around United’s great midfielders of the past. Edwards, Roy Keane, Paul Scholes, Bryan Robson he ain’t. But only Edwards, Keane, Scholes and Robson were.

Are other young players damned with the same faint praise? Do you hear of Harry Winks: ‘Tidy, but he’s no Glenn Hoddle’? Tammy Abraham: ‘He’s scoring goals but he’s not Didier Drogba.’

Frankly, it’s a bit weird. But the general bewilderment around McTominay stems from the fact that no one knows anymore where the bar is set at Manchester United.

A club so used to the very highest of standards has seen them plummet in the post Sir Alex Ferguson years – hardly a coincidence – to the point that no one any longer understands what it takes to be a United player.

On the basis that it takes one to know one, Ole Gunnar Solskjaer has a fair idea and his predecessor also had high expectations which too many of his players could not – or rather, would not – meet.

When Jose Mourinho recognised the mental fragility and flakiness of the core of his squad, he looked for an example in the vain hope others might follow it. Unfortunately for McTominay, it was he who became Jose’s pet.

McTominay received the Manager’s Player of the Year award in 2018, prior to which there was no such honour. The prize did not even exist when the presentation evening programme went to print. Mourinho felt an example needed to be made for his squad of the attitude he expects from all of them so it was McTominay who was sheepishly brought up on stage.

The message was too subtle for many of Mourinho’s players and the manager had to spell it out for them four months later after an alarming 3-1 defeat at West Ham. “Scott McTominay is a kid with a special character, very humble, aggressive in a positive way, brave, he’s a special kid,” said Mourinho. “He’s a special character, a special personality that a team in a negative moment needs. Do my other players have that mentality? Not all of them.”

Mourinho was pissing directly into a gale by that point just over a year ago. His United were a lost cause and inevitably the manager paid the price.

When he went, many presumed McTominay might too. Solskjaer tried to shift him aside similarly to how he shunted another much-maligned Mourinho favourite and poster boy for United’s decline, Marouane Fellaini, towards the exit. McTominay played just a single minute in Solskjaer’s first eight games before his first start came against Liverpool at Old Trafford in the type of match we now know the 22-year-old shines.

Why does he stand out in the big games? Like Darren Fletcher, the last Scotland midfielder to get pelters when breaking through at Old Trafford, McTominay relishes the battle and that willingness to scrap stands out like a beacon when too many of his team-mates shy away from it.

But like Fletcher, there is more to McTominay’s game than graft. Keane offered an insight on Monday night into how he made an incredible career for himself as a midfielder and it is a simple blueprint that McTominay is following. Straightforward though it is, as Keane said, it remains a mystery to many, including a vast swathe of McTominay’s team-mates.

Roy Keane‘s story about Cloughie before his Forest debut at Anfield was class.
“You can pass it, control it and move – so just do that tonight”
Simplicity is genius.
Keane said he did it for the rest of his career 👏🏻👏🏻

The United academy graduate, one of six to start against Arsenal, is a home-grown solution to a problem United have tried to throw vast sums of money at. The three other players in Solskjaer’s squad last night to play in the base of the midfield cost over £180million. McTominay, a lad whose ascension to the first-team squad was said to have astounded some of his academy colleagues, is out-performing them all.

As Gary Neville said, no one knows what Fred is while Nemanja Matic appears to have aged five years in the last 12 months. McTominay does not have Paul Pogba’s natural talent but United’s record signing is being outshone because he doesn’t possess his partner’s character.

Against Arsenal, it was expected that McTominay would do the dirty work while Pogba looked forward. But the Scotland midfielder took on both roles. Aside from the back four behind him, no one recovered possession more times than McTominay; no one on the pitch made more recoveries inside the opposition half; only Daniel James had more successful dribbles and again only James won more duels.

McTominay got on the ball more often than Pogba in Arsenal’s defensive third and though the No.39 made one of those occasions count with the opening goal, it is a fact that Solskjaer must address. If Pogba is one of United’s most creative talents, how can they – and he – get the £89million star in possession in threatening areas, rather than chucking Hail Marys from the quarter-back position?

Until United address that problem – if they ever do – McTominay will have to maintain that duel role. And while he continues to thrive, let’s give him the credit he deserves for the player he is becoming, rather than judging him for what or who he is not.