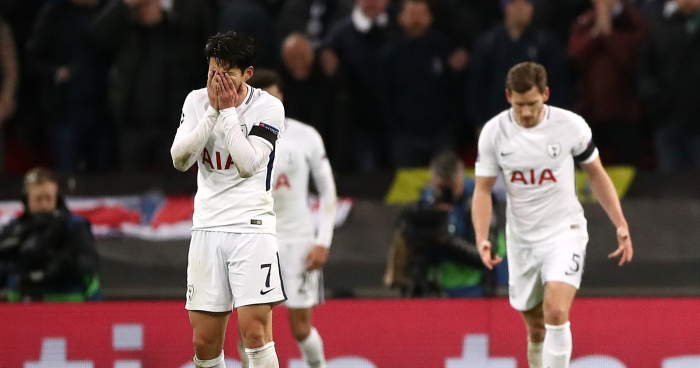 Tottenham cannot say they were not warned. Juventus are the kings of the second-leg squeeze, a team who embody every decade of Italian football history. They have know-how, experience, heart, courage and anything else you can cram into that Italian football cliche box and tie with a red, white and green ribbon.

Mauricio Pochettino’s team may not have believed it for the first hour at Wembley. Christian Eriksen delighted in the spaces in front of Juventus’ defence, Harry Kane caused headaches for each of the three centre-backs and Davinson Sanchez marauded across his own half as if he owned the stadium.

At that point, Juventus were rattled. There is no point pretending that falling 1-0 behind and being outplayed in the first half was part of Il Grande Piano, and Massimo Allegri did not try to claim as much. Juventus were surprised by Tottenham’s response in the first leg and they were unnerved by their control of the first half of the second. The ideal script was to keep it tight and score in the second half, then hold onto the precious lead. Juventus had won the three matches in between the two legs 1-0, as if each were a training session for the main event.

For most of the first hour, we worried about Juventus. Watching matches between the biggest teams, the victors are usually those who play with the most energy. That isn’t necessarily a question of covering the most ground, making the most tackles or even registering the most sprints, but a more intangible ability to make sure the game is played to your own beat. On Tuesday evening in the Parc des Princes, Real Madrid looked as if they had more to give than Paris Saint-Germain, and thus imposed their own style rather than having a style imposed upon them. In the first half on Wednesday, Tottenham did the same.

Yet that only makes the comeback even more impressive. Allegri made two substitutions in three minutes rather than both at the same time, intending to cause confusion in Tottenham ranks as they figured out the first switch just as the second was happening. It was a strategical masterstroke from an oft-maligned coach. Juventus scored twice in the five minutes following the second change.

Suddenly, old age was transformed into experience. Having wounded Tottenham with a sensational three minutes of attacking play, Juventus killed them off with the solidity of their defensive structure. The Old Lady is in no mood to give an inch when she gets ahead. The beat of the match, the energy, switched entirely.

Gianluigi Buffon may be the pillar of this team, but Giorgio Chiellini is its best player. He will concede that he was troubled by Kane over the course of the two legs, but when Juventus need a leader to drag them to victory it is always Chiellini. He defends his goal like a man who was born into a siege situation. Chiellini is not just schooled in the Italian way of defending, he wrote the textbook. The image of Buffon and him screaming into each other’s faces, releasing pent-up adrenaline after thwarting another attack, is as iconic as Bobby Moore and Pele’s famous embrace.

Pochettino will stress that Tottenham have earned nights such as these, if not results. More will come as this squad grows together. If the tendency is to describe defeats such as these as ‘Spursy’, you at least have to recognise that the standard of opposition is getting stronger and stronger. Tottenham did not ‘bottle it’, they were beaten in the biggest moments by one of Europe’s superpowers. They failed to react to substitutions quickly enough and they were caught out.

Instead, there will be lingering frustration that beating one of last year’s finalists to top spot in the group stage only led to meeting another in the last 16, and pride that Tottenham matched Juventus over two legs. Juventus’ front two cost them £126m; Tottenham’s entire team on Wednesday cost around £10m more. Almost a third of that was accounted for by Sanchez.

The manager will emphasise too that the age of the squad makes progression likely. Seven of the starting XI were aged 25 or under, and none of the outfielders had ever won a knock-out Champions league tie before. That can change.

But it cannot change this season. Pochettino always knew that Champions League exit, whenever it may come, would reconvene the media discussion over Tottenham’s ability to sate players – financially and professionally – who might have their eyes on elite clubs. He’s about to be asked an awful lot more questions on a similar theme.