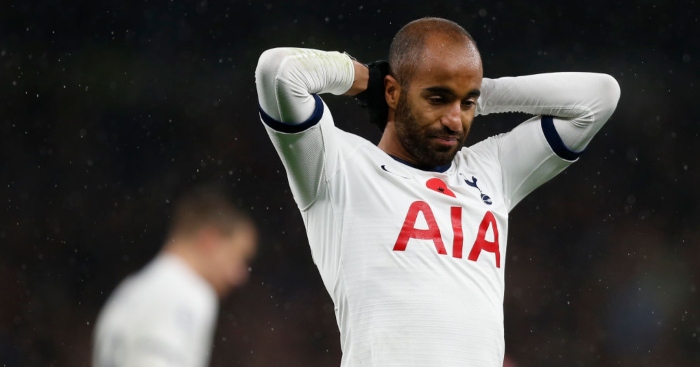 It’s early in the season, but Sheffield United already have an identity. They’ve become the side that nobody can beat without playing well.

Their intricate, effective and – actually – attractive football can come up short sometimes, occasionally being undermined by a lack of proper force, but more often than not it’s proving complete enough to provide a thorough examination of an opponent’s strengths and weaknesses.

Which for a group of Tottenham players in recovery, who continue to baby-step out of crisis, probably wasn’t an appealing prospect in a chilly November rain. Spurs could do with playing opponents who beat themselves at the moment. They need a run of games during which their wounds are allowed to heal – fights, but with nothing allowed above the shoulders or below the waist.

But Chris Wilder’s United are by no means a soft touch and, generally, if there’s a flaw to find they’ll give it more than a prod. They’ve also conceded just eight goals all season, the joint fewest in the division, suggesting that if they themselves have a weakness, the Premier League is yet to find out what it is.

For Mauricio Pochettino, this was a day on which to uncork the momentum bottled in Belgrade. Giovani Lo Celso started, so did Tanguy Ndombele; Toby Alderweireld and Christian Eriksen, two of the less committed elements, were quarantined on the substitutes’ bench.

The aim was competence. With the exception of the games against Red Star, what has characterised Tottenham over these last few months has been a pitifully low baseline. They’ve managed the occasional attacking spike, but have been fatally undermined by erratic basics – most often chaotic positioning and defensive catastrophes. Ultimately, the kind of mistakes indicative not just of poor form, but full-blown neurosis.

So it’s about getting through at the moment; learning again to be six or seven out of ten for 90 minutes, not a mess of threes and fours.

In only a few months we’ve gone from Champions League finalists to praying someone can graft bionics on to the broken parts of Erik Lamela in order to steer us clear of relegation and save Mauricio Pochettino’s job. Even by Spurs standards 2019 has been absolutely batshit.

One of the challenges contained within that is the atmosphere inside White Hart Lane, which remains distrustful and afraid. The novelty is starting to wear off here. It’s still a wonderful arena, but it’s now just the home of an underperforming side. Nobody’s talking about the architecture anymore; missed passes provoke fretful groans and every phase played without the ball is bringing a strange, airless energy.

It’s part of the fight and, in the first half of Saturday, Tottenham didn’t deal with that particularly well. Rather, Sheffield United exploited the situation to their advantage, playing by far the more coherent football and more regularly threatening to score a goal.

Within two minutes of the game starting, a rash Eric Dier foul led t0 Paulo Gazzaniga having to touch a deflected Oliver Norwood shot over the bar. On 30 minutes, John Lundstram whipped Jack O’Connell’s cut-back against the outside of the post. Mixed in between were half-chances down the other end, but never with enough regularity to alleviate the sense of impending doom.

These are the kind of afternoons – wet, dark, bitingly cold – when you realise just how thin the margins are at the top of the game and how important confidence can be. It shows in the number of touches a player takes. How quickly he’s able to make a decision and wounded he can look whenever it’s the wrong one.

Maybe it even shows in how much of a chore having possession can seem to be. At times, Spurs looked like they were trying to pass a medicine ball around.

That didn’t even change after they took the lead. When Son Heung min pounced on Enda Stevens’ careless back-pass and shovelled the ball past Dean Henderson, the stadium erupted. A proper catharsis, with Son punching the air by the corner flag.

But nothing was cured. The noises was briefly louder and happier but just as quickly Tottenham began to retreat, suddenly terrified of a Sheffield United potency which by that point existed as much in their minds as in reality. And, within minutes, David McGoldrick was tapping home at the back post, scoring what would have been a deserved equaliser had it not been for VAR and an offside toenail.

It may not have counted, but it would still have angered Pochettino. Chris Wilder’s football may not be formulaic, but overloads in wide positions are one of this staples and that move was practically a training drill.

Pochettino’s mood would have darkened further when his side lost their lead for good, this time from a move which began on the other flank but which – dispiritingly – was almost identical in its nature. There was no man at the back post a second time, but there didn’t need to be. George Baldock’s sliced cross took a fortunate nick off somebody – maybe Eric Dier – and dropped lamely into Gazzaniga’s net.

It was an absolute pudding of a goal; so bad in so many different ways and so perfectly descriptive of the situation in which Pochettino and his players find themselves. It was maddeningly bad. Stupidly easy.

It might yet have been forgotten late on, had Henderson not touched Lucas Moura’s whistling drive over the bar, but that would have been a goal to betray the nature of this game. It wasn’t about shots and saves, fouls and free-kicks, but Tottenham’s attempts to escape their own muscle memory.

On this evidence, they remain tightly in its grip. There were good points and positives, encouragement to draw too in the performances of Lo Celso, Son and Sissoko, but this is about more than football at the moment. Not gameplans or preparation, fitness or technical quality. None of the game’s usual imperatives are particularly important. Instead, what matters is the pursuit of conviction, the wind Tottenham need to catch which, for now, keeps slipping through their fingers.