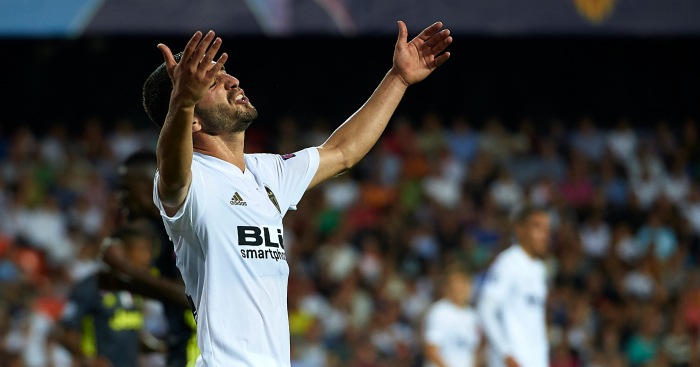 When do we start to worry about Valencia?

They were La Liga’s surprise package last season, starting their first campaign under Marcelino like a steam train, keeping the pace with leaders Barcelona and remaining unbeaten in the league until December.

Although their subsequent form dropped off somewhat, they still had enough in the tank to finish comfortably in fourth place, returning to the Champions League for the first time in three years.

This season so far has been a different story. They are without a win in their first four La Liga matches, and meekly surrendered to the ten men of Juventus in Wednesday night’s Champions League opener.

The fact that it is so early in the campaign means there is no need to panic just yet, but that doesn’t mean that alarm bells won’t be ringing in the heads of Valencia fans who have been through a number of false dawns in recent years.

It has to be said that despite their patchy recent history, Valencia’s poor start has come as a surprise. Last season’s excellent campaign felt like the beginning of a new era of stability after years of off-pitch turmoil and on-pitch mediocrity.

Marcelino had an air of permanency about him, which was exactly what was needed after years of chopping and changing between managers who were either incompetent or ill-suited. The team responded well to Marcelino’s methods, and began playing exciting football within a clearly defined system. Finally, the club seemed to have an identity again.

The board showed a willingness to back Marcelino in the transfer market, a luxury that was not afforded to any of the previous eight (eight!) managers who had occupied the hotseat since the current owners took over in May 2014. This summer, they spent an enormous €125m on transfers, a figure only bettered by Real Madrid and Barcelona. They brought in nine players in total, signing the likes of Daniel Wass, Jeison Murillo and Kevin Gameiro to add extra dimensions to the squad and increase competition for places, while making Geoffrey Kondogbia’s and Gonçalo Guedes’ loan deals permanent. Denis Cheryshev and Michy Batshuayi also joined on loan to bolster their attacking options.

Why then, if their over-performing squad has been strengthened further, are they performing so poorly? Perhaps the squad has become too bloated, or maybe the new signings are simply taking a bit of time to adjust to Marcelino’s methods and tactics.

What is for sure is that the form of captain Dani Parejo, who had arguably the best season of his career last year, has dropped off dramatically, and other key players are not quite performing to the high standards they set last season.

This is probably not helped by the fact that Marcelino has made changes to the starting line-up for every game this season. He is seemingly unsure of who fits his system best and in which positions, and the regular changes are upsetting the stability of the team.

The midfield is a particularly problematic area, with Wass and Carlos Soler often finding themselves pushed out to the flanks from their preferred central midfield positions, while Parejo has had three different central midfield partners already this season.

The winless run seems to have affected confidence too. They looked devoid of inspiration in their 0-0 draw with Real Betis on Saturday, and seemed to have a collective crisis of confidence against Juventus on Wednesday night.

Although Juve were favourites going into the match, Valencia started brightly and were presented with a golden opportunity when Cristiano Ronaldo was sent off in farcical circumstances after half an hour. Not only did Valencia fail to grasp the opportunity, they crumbled under the pressure. Individual errors from Parejo and Murillo gifted the visiting Italians two penalties, both of which Miralem Pjanić duly converted. Parejo himself missed an injury-time spot-kick, which rather summed up Valencia’s night. The ten men of Juventus were comfortable 2-0 winners in the end.

Although it is still very early in the season, Marcelino has to find his best team and restore his side’s self-belief now before it is too late. They have a tricky next five fixtures, and the outcome of those games could make or break their season. First up is a trip to neighbouring Villarreal on Sunday, before a midweek match at home to high-flying Celta de Vigo. A tough trip to the Basque country to play Real Sociedad follows, and a home game against Barcelona comes just five days after a massive clash with Manchester United at Old Trafford.

If they remain winless after that run of fixtures, as could feasibly be the case, they will find themselves all but out of the Champions League and right at the foot of the table. They need to find a way to stop the rot now, or their season could be over before it has truly begun.