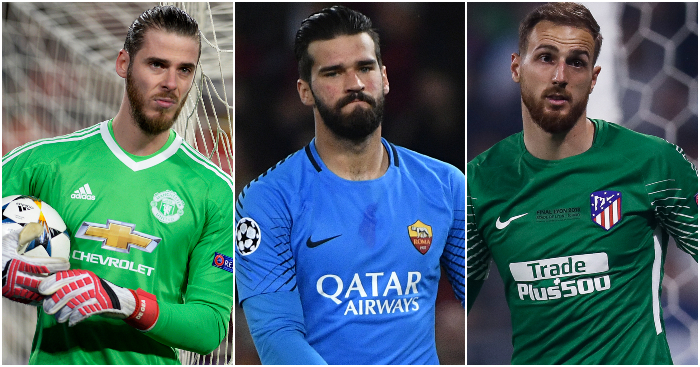 There are around a dozen of Europe’s top goalkeepers on the merry-go-round. By the time it comes to a stop, it is not unfeasible that both Champions League finalists, the Europa League winners, the FA Cup winners and the champions of France and Italy will all be starting the season with a new No.1.

Liverpool and Real Madrid seem keen to give it a post-World Cup kick-start. Real tried to replace Keylor Navas with David de Gea in 2015 and finally, amid a summer of change at the Bernabeu three years on, it is likely that Navas’s time as No.1 is up, with three keepers having been in the frame.

For a brief time a few weeks ago, there was a sense that De Gea might finally be granted his return to Spain and, given his contribution to United since 2011, few would have begrudged the 27-year-old. Roma’s in-demand stopper Alisson, who is destined for Liverpool, was also said to be a target, but Thibaut Courtois’ patience looks like paying off with Real’s options now being whittled down to him.

If Courtois departs the Stamford Bridge box then Chelsea will have an urgent vacancy to be filled in the next three weeks. Kasper Schmeichel has been linked, so too has Petr Cech after Bernd Leno moved to Arsenal earlier this summer. Pepe Reina and Gianluigi Buffon will be guarding new goals while Jack Butland, Jasper Cillessen, Gianluigi Donnarumma and Alphonse Areola – England, Holland, Italy and France internationals – have all been rumoured to be eyeing new challenges.

This is unprecedented movement in a market that is normally the most stable. Significantly, we are talking about vastly inflated sums of money changing hands for shot-stoppers, realigning an imbalance that has existed for decades about the value of a goalkeeper compared to their outfield counterparts.

The number of clubs chasing top-class keepers certainly makes this a sellers’ market, with it finally dawning on the game’s supposedly brightest brains that a great goalkeeper can make the difference between a good season and a great one. Or, for some, their keeper is what separates bad from catastrophic.

United’s reliance of De Gea and the tangible difference he has made to the Red Devils, especially since Sir Alex Ferguson retired, is too stark not to notice. If United fans thought things were bad at times over the last five years, just imagine the depths they might have plumbed without their four-time Player of the Year. Conversely, how much more might Liverpool have achieved if they had a custodian of a similar class?

A more striking example of the difference a quality keeper can make was seen across town from Old Trafford at Manchester City.

Pep Guardiola paid a world-record sum for a goalkeeper when he bought Ederson from Benfica last summer. The Brazil No.2 settled immediately and though his attacking play impressed everyone – especially the many left open-mouthed by his passing who presumably thought keepers were still the fat kids shuffled towards the net because no-one else fancied it – Ederson also provided a safe pair of hands, certainly in contrast to the hologram of Claudio Bravo that came before him.

City broke new ground, in sterling at least, with Ederson costing £34.9million. The deal broke a 16-year-old record held by Juventus who paid £32.6million in 2001 for Buffon. In goalkeeping terms it was momentous. In a wider context, it was a figure viewed by some as pocket change.

During the same summer window, there were 22 deals in Europe’s big five leagues that were worth more than City’s record breaker. City themselves paid £15million and £17million more for full-backs Kyle Walker and Benjamin Mendy respectively, while Danny Drinkwater cost Chelsea slightly more than Ederson; Tiemoue Bakayoko was almost £5million more expensive.

That two XIs worth of players cost more than the world’s most expensive keeper last summer highlights that No.1s were still not being viewed in the same terms as defenders, midfielders or attackers in terms of their importance in a successful side. Thanks to the likes of De Gea and Ederson, as well as the less capable keepers promoted above their ability level, clubs are now recognising that the foundation of their defence – and for an increasing number, their attack – is an area that warrants greater investment.

Alisson, described as ‘the Messi of goalkeeping’, seems quite reasonably priced at £67million, while anyone looking to get Jan Oblak away from Atletico Madrid would have to cough up the £80million stated in his release clause. Surely only a nine-figure sum would have tempted United to De Gea.

Three years ago, the Red Devils struck a deal with Real to sell him for a package worth around £29million – £18million cash plus Navas, rated around £11million. Yes, that agreement was reached when De Gea had less than a year on his contract and his status has steadily risen to the point that he is now widely regarded as the best in the world. But those circumstances do not account for the 200 per cent increase in his value.

It seems the world is belatedly catching up with Brian Clough, who paid a club record £250,000 for Peter Shilton in 1977, when the British transfer record was twice that amount. “I was asked by someone on our board why we should bother to spend so much cash on a guy who might not be in the game for 85 minutes,” Clough recalled, after Shilton had helped Forest to two European Cups, the league title and the League Cup.

“Shilton was the deciding factor. I’d have paid almost any price. With Shilton in goal, it gave everyone else more confidence. It spread throughout the side. We were full of ourselves,” he continued.

More than four decades later, such radical thinking is finally now viewed as common sense. And for some of Europe’s biggest hitters, it may prove to be the difference between being contenders and champions next season.