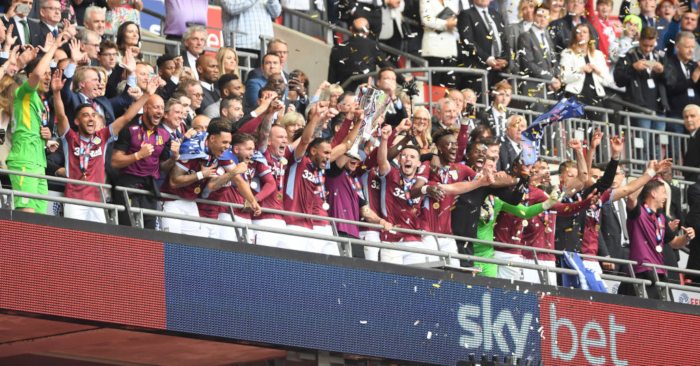 We were told last week that Frank Lampard was ‘one game away from the Chelsea job he so covets’. What was forgotten in all the giddy talk about Lampard’s audition for a job that is not currently available is that the man in the opposing dug-out at Wembley was already in the job he so coveted. While Lampard was slipping on his stepping stone, Dean Smith was quietly reaching his nirvana; he is unlikely to ever surpass the achievement of taking his beloved Aston Villa back to the Premier League.

We are told so often that this is the richest game in football, that these 90 minutes are worth £170m, that one match can safeguard a club’s financial future, that it is easy to forget that even this game can still be fuelled by love more than money. In his pre-match press conference, Smith did not talk tearfully of TV income but of his father, ill with dementia and completely unaware of his son’s achievements; Jack Grealish did not have to buy a box for 60 members of his family because they wanted to see an end to Villa’s FFP compliance issues.

Many have been amused by Liverpool’s ‘This Means More’ campaign this season, but as Sky Sports interviewed Aston Villa fans ahead of their second successive play-off final, permutations on that phrase were never far from lips. With a Villa fan in the dug-out and a Villa fan wearing the captain’s armband, this really did mean more than last season, when Steve Bruce was their manager, John Terry was their skipper and the football was unloveably pragmatic. Neutrals understandably wanted to see the swashbuckling Fulham emerge victorious. This year, not even the presence of Terry in the Villa dug-out could make Derby the romantic choice.

Villa went into this game as heavy favourites, not just because they had beaten Derby 7-0 on aggregate this season, and not only because a ten-game winning run made them the form team of the play-offs, but because they had been here before – nine of the 11 teams who have played two consecutive play-off finals have won at the second attempt. There may have only been four survivors from the defeat of 12 months ago, but their confidence contrasted wildly with the nervousness of a Derby side that had already won their final at Elland Road.

In truth, the football was poor – as it so often is when the stakes are so high – but Villa were largely dominant when it mattered and Derby were largely error-strewn when and where it really mattered. It felt like Lampard had made twin mistakes – to start Mason Bennett and to play a diamond formation against a Villa side already likely to dominate on the flanks. That 1-0 became 2-0 was no surprise; Derby conjured up a grandstand finish – thanks to substitute Jack Marriott – but the damage had long been done.

33 – Aston Villa have scored 33 goals from crosses in the Championship this season (including play-offs); the most of any team. Formula. #EFLPlayOffs #PlayOffFinal pic.twitter.com/c5KAMykTlL

This was a day that belonged to Smith, to Grealish and to the thousands of fans who endured Paul Lambert, Remi Garde and Tim Sherwood on the way to ignominious relegation just six years after finishing sixth. This club is a reminder that there was a time – not so very long ago – when any talk of the Big Six was a dull discussion about energy suppliers. Less than a decade ago Aston Villa finished above current Champions League finalists Liverpool and the contrasting status of those two clubs is an apt illustration of what happens when good clubs are managed badly.

But at least they are both now back in the same division and when Grealish rolled out the cliche that “we all know where this club belongs”, it was hard to be cynical and dismiss it as yet another soundbite. Derby and Lampard were palpably not ready to join the elite but the mighty Villa and a manager barely recognisable outside of the Midlands absolutely were. It did mean more.