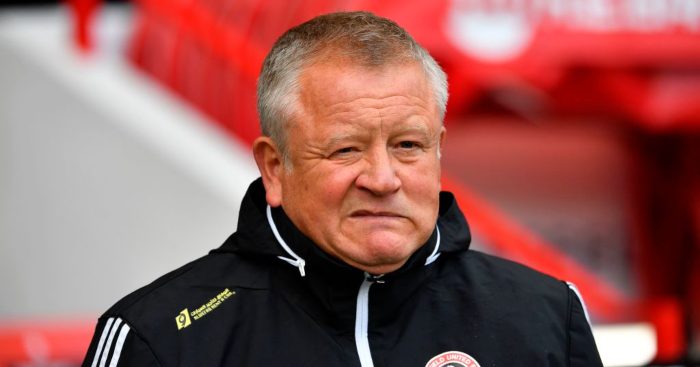 Appreciation for what Chris Wilder has built at Sheffield United appears to have reached some sort of critical mass. The world may not quite be literate on the ways of the overlapping centre-halves, but it’s broadly accepted that Wilder isn’t just asking his players to turn the sky black with footballs.

But there remains this irritating refusal to delve beneath the surface with him, captured most recently by this series of tweets.

You question the LMA manager of the year who works with the lad day in day out (for nearly 2 years now) with regards of how to man manage (Wilder's best trait) him into a response? https://t.co/fQ3vNr8cUF

The thread does a fine job of describing Wilder’s previous in this area. Most will have been surprised to hear him speak in such blunt terms after Dean Henderson’s mistake, but with the additional context it certainly makes sense.

What’s interesting is to imagine the analysis had a more celebrated head coach done the same. If, say, Pep Guardiola had chastised Ederson for something similar, would he have been dismissed in the same way? Or would  there have been a far-reaching debate about his intentions and a neurone-by-neurone study of the psychological reaction he was trying to provoke? It wouldn’t have been presented as out-dated tough love but as a Jedi mind trick.

Okay, that probably wouldn’t have happened on TalkSPORT – Alan Brazil doesn’t really seem the musing sort – but it’s an easy scenario to imagine. As it would be with Jurgen Klopp, whose joviality seems to inspire a dozen new articles a month, as if being compassionate and human with players is somehow revolutionary.

The point is that these discussions happen regularly, but only around certain types of coach. That’s partly attributable to the popularity of their clubs, without question, but it’s also a reflection of how British managers who talk and carry themselves in a particular way are treated.

So far, so unoriginal, but it’s also a great irony for Wilder. Whenever a new, foreign appointment is made in the Premier League, there are always a few columns decrying that decision. They pretend not to understand why Steve Bruce isn’t managing Manchester United, or claim offence at Sam Allardyce not being offered the chance to interview at Arsenal.

Yet, when someone like Wilder appears, where are those same people? On the Monday after his Sheffield United had finished going toe-to-toe with the European Champions – and think about what an achievement that is given the club’s recent past – were there any drums being banged? Where were the tactics graphics and the moving portrayals of his childhood?

The trouble with the propaganda behind other English coaches is that they’re often based on a lie. Allardyce does preach functional football; Bruce, Pardew and Hughes are very limited in their capabilities. Pretending otherwise made those who fought their cause look silly, small-minded and, at times, nationalistic. But Wilder is someone worth promoting. Given what he’s achieved, his is also a mind worth exploring.

It’s a strange situation, but for all the complaints about the primacy afforded to Guardiola, Klopp and Pochettino, those who demand parity have certainly been slow to board this bandwagon. Wilder hasn’t just assembled an army of thugs, or built a team from 11 identical blocks of granite, he’s constructed something intricate and interesting from players who, for a long time, were presumed not to have the requisite talent to play in the Premier League.

How, on the one hand, can someone claim to care about the plight of the English manager, but on the other pay no attention to something like that? It makes no sense. It’s also damaging.

Managers are dependent on their reputations. Not just the binary of what they have and haven’t achieved, but what they’re seen to represent and how they’re perceived as a result. Guardiola is details-obsessed because we’re told that he is. Klopp emphasises interpersonal relationships because his biographers say that he does. When a club makes a new appointment, one of its considerations is inevitably the corresponding reaction: how would supporters react to a new coach? What kind of optimism will the values that he represents engender?

If Chris Wilder were to leave Sheffield United tomorrow, would his appointment elsewhere provoke appropriate enthusiasm? If the answer is no, then that’s likely because he continues to be misrepresented publicly and the scale and nature of his abilities are repeatedly undersold.

That amounts to a terrible disservice. If the talking head personalities continue to describe him with platitudes and clichés which betray just how little attention they’ve been paying, then that becomes Wilder’s public identity. It doesn’t really matter that a small corner of the internet is celebrating Sheffield United’s style, nor that obscure writers are penning angry corrections. If he isn’t drawn in anything other than monochrome across the mediums with the greatest reach, then he will never be seen in more than black and white.

There has never been a better chance to attack the notion that smart football and fancy ideas can only come from specific parts of the world. And that a certain accent sounds like the roar of a dinosaur.